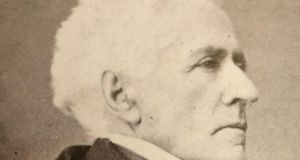 By an extraordinary coincidence on Wednesday night, I found myself invited to two separate events, both involving exhibitions, both about the Great Famine, and both at 6pm.

Fortunately, they were in the same Dublin postal district. So without achieving bilocation, I was able to turn up at each – briefly in the case of the first, which involved an opening and could be revisited later.

The second, by contrast, was the farewell of a show called Coming Home, which has been on an epic trek around Ireland these past 12 months, having travelled here from its permanent address at Quinnipiac University in Connecticut.

The 50 works of art toured from Dublin to Derry via what Queen’s University’s vice-president Lynn Bushnell called the Famine’s “Ground Zero”, Skibbereen, and attracted more than 100,000 viewers along the way.

Now, Coming Home is going home to Quinnipiac, where it was made possible by the philanthropy of the late Murray Lender, a bagel baron who turned that once-ethnic food into an all-American staple, and who had no connection with this country before he poured some of his fortune into creating the Ireland’s Great Hunger Museum, which he didn’t live to see.

Like the bagel, Lender’s family came to the US from Poland.

And to add to the coincidences of Wednesday’s clash of fixtures, the night’s other event was organised by the Polish Embassy, commemorating one of that country’s greatest sons, a forgotten hero of the Famine, Pawel Strzelecki.

Strzelecki is not quite as forgotten as he used to be. In recent years, he has had plaques erected in his honour in Dublin and Clifden.

But now, and until the end of August, his life will be the subject of an exhibition at the Royal Irish Academy, where it was officially opened by President Michael D Higgins.

Not the least remarkable thing about Strzelecki is that he was also responsible for the name of (mainland) Australia’s highest mountain. If you do table quizzes, you’ll know the answer to that question is Mount Kosciuszko. You may not know it was so named for the Polish freedom fighter Tadeusz Kosciuszko, although he was never anywhere near it.

He was, however, a childhood hero of Strzelecki, who was born in 1797.

As in Ireland, the 1790s were a revolutionary period in Poland, and Kosciuszko was a local version of Wolfe Tone, albeit that he survived the failed insurrection to live out his life in exile.

By the 1830s, Strzelecki was an exile too, for more personal reasons. He spent 10 years travelling the world, including Australia, where he explored widely, collecting specimens in his professional capacity as a geologist.

Climbing said mountain, he noticed its similarity to a man-made mound erected in Krakow to Kosciuszko’s memory, so he named it accordingly.

But Australia now also has places named after Strzelecki, including a mountain range in Victoria. And he is honoured there too for having been ahead of his time among Europeans in acknowledging the rights of the indigenous population.

Speaking on their behalf in 1845, he complained of the loss of lands on which aboriginal tribes had depended for food, and lectured the British authorities: “You prosper on our native soil and we – are starving.”

That was prophetic of the disaster about to engulf Ireland, in the response to which Strzelecki would play a big part.

He was back in England, his main home, by that time – January 1847 – when a group of banking leaders combined to raise funds for famine relief. They needed someone to dispense them, who could be trusted by both sides. For various reasons, Strzelecki was the man.

Throughout that grim year, he worked mainly in the northwestern counties of Donegal, Sligo, and Mayo, reporting conditions worse than he could have imagined, beyond all “exaggeration and misrepresentation”.

Unlike others, he stayed on through the first half of 1848, before being recalled. The project had lost urgency by then, and the cause was falling out of fashion.

But the start of 1849 brought death rates as bad as “Black 47”. So Strzelecki, to his great credit, returned that summer, dispensing reduced but still very substantial sums of aid.

Much of his work here was targeted at children, via schools, where they were fed another eastern European staple, rye bread. At the scheme’s height, 200,000 children benefitted.

How many owed their survival to Strzelecki is unknown, but it seems fair to assume that a roll call of descendants today would greatly outnumber those who featured in a famous scene from a film about a later humanitarian relief project, set in Poland, Schindler’s List.

1 Coronavirus: Non-essential travel from US set to be banned within days
2 Meath creche awaits test results after two cases of Covid-19
3 Coronavirus: No additional deaths in State but 68 new cases
4 Are we really facing the death of the office?
5 ‘Our hearts are broken’ – implications of fresh lockdown sink in
Real news has value SUBSCRIBE