Wobble on inherited appointment decision would have worsened bad situation 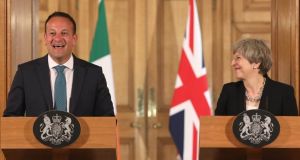 Leo Varadkar has had a baptism of fire as Taoiseach, having to deal with a political crisis over a judicial appointment in his first week in the job as well as dealing with some internal fallout from his Cabinet and junior ministerial appointments.

It was a rude introduction to the rollercoaster nature of the Taoiseach’s office. One day it is the glamour of travelling to Downing Street to meet British prime minister Theresa May and the next being subjected to hostile questioning from Opposition leaders in the Dáil over a questionable Government decision.

Varadkar had better get used to it because that is the way his life is going to be for as long as he remains in the Taoiseach’s office. Political crises will come and go on a regular basis and the only question is whether he has the temperament to deal with them.

He managed to cope with the first assault on his position reasonably well, given that he was on a sticky wicket over the way the former attorney-general Máire Whelan was appointed to the judiciary on the last day of former taoiseach Enda Kenny’s tenure.

Varadkar was left to carry the can for what was essentially his predecessor’s final act. He was in a no-win position but made the decision to defend the appointment and try to move on to next business as quickly as possible.

In the circumstances it was the right option because any sign of a wobble or second thoughts would have made a bad situation worse. Look what happened to May when she panicked in the face of criticism and abandoned her election manifesto in the middle of the British general election campaign.

At issue in the Whelan appointment is the process that was followed rather than her qualifications for the post. If someone is qualified to advise the Government on array of legal issues that inevitably arise on a day-to-day basis then they should be more than qualified to make decisions in the calmer atmosphere of the courts.

One of the things that influenced the reaction of Ministers was that from the moment the former Labour Party treasurer was appointed attorney-general in March 2011 Whelan has been subjected to a sustained negative campaign suggesting she was not up to the job. However, she won the loyalty of ministers from both parties in that government who came to respect her judgment and her capacity to give advice without delay.

“Much of the hostility to her comes from a clique of arrogant barristers in the Law Library who attended posh schools and regard a woman from east Galway as not being their social equal,” said one former Fine Gael minister.

The one serious black mark against Whelan was the criticism she received in the Fennelly report over her handling of the Garda taping controversy. Fianna Fáil leader Micheál Martin focused in on this issue in his objections to the appointment but Varadkar remained adamant that a suitable person was appointed through a correct process.

The core of the problem is the way Whelan’s appointment was rushed through on the last day of Kenny’s time in office as it created the impression that something untoward had taken place.

If Whelan was interested in the position she should have asked the taoiseach to approve it months ago when the Court of Appeal vacancy arose rather than leaving it to the very last minute when it was inevitably going to generate suspicions.

Comparisons have been drawn with the way Albert Reynolds appointed Harry Whelehan as president of the High Court in 1994 but there is a crucial political difference between the two cases. The Labour members of cabinet walked out when Whelehan’s nomination was proposed but Fianna Fáil went ahead regardless and the party lost power as a result.

In the current case the Independent Ministers Shane Ross and Finian McGrath accepted the decision and because of that are as committed to it as their Fine Gael colleagues.

Given that the controversy wasn’t of his making, although he was a member of the cabinet which signed off on the appointment, Varadkar put up a stout defence in the Dáil over the past two days. He was helped by the fact that Micheál Martin has personalised the issue rather than focusing simply on the flawed appointment process.

Varadkar had an easier time dealing with Sinn Féin leader Gerry Adams, who attempted to embarrass him for expressing childlike excitement at going into 10 Downing Street on Monday. His observation that it reminded him of the scene in the film Love Actually, when fictional prime minister Hugh Grant waltzed down the stairs of the building was picked up in the international media.

While some of his colleagues cringed with embarrassment at Varadkar’s remark its gaucheness actually reflected one of the key reasons for his popularity to date. He responds to situations like an ordinary member of the public rather than a professional politician.

As Taoiseach he will find it harder to sustain that approach as he faces into one controversy after another.

1 Cork shootings: Gardaí find lengthy apparent suicide note on one of the dead men
2 Róisín Ingle: Five ways to find joy in a pandemic. Only one of them is illegal
3 Johnson’s Brexit Bill set to be blocked by House of Lords
4 Johnny Ronan loses out on €315m Dublin docklands deal
5 Michael McDowell: We must check if this Covid-19 lockdown is really necessary
Real news has value SUBSCRIBE