Stephen Collins: The Greek effect – how Greece has become part of Irish politics 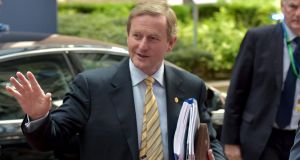 The Greek crisis has intruded itself into Irish party politics over the past week and could even have a direct impact on the outcome of the next election here.

At the EU summit in Brussels, Enda Kenny told his Greek counterpart Alexis Tsipras to do his political business the Irish way and come up with a realistic deal that other countries could accept. He was responding to a tweet from Tsipras, who suggested Ireland and Portugal had received preferential treatment to Greece from the EU institutions and the IMF.

At home Tánaiste Joan Burton was blunter, complaining Syriza was more interested in lecturing the rest of Europe than running the Greek economy.

At one level the clash between the Coalition and the Greek government is about party politics. Sinn Féin, the hard left, Shane Ross and some Independent TDs were vociferous supporters of Syriza during the Greek election in January.

As early as his victory speech on the night of the election, Tsipras reciprocated the sentiments. “The victory of Syriza will be followed by the Spanish people electing Podemos and United Left and next year, in Ireland, with Sinn Féin,” he told a jubilant crowd of supporters in Athens.

Such open support for the Government’s political opponents was hardly the best way of persuading the Coalition parties to look favourably on Greek demands for a new deal, but the issue goes far deeper than pure party self-interest.

If Syriza gets a substantial debt write- off and further financial aid with no serious commitments to political and economic reform, the response of the main Irish parties to the crisis here will be utterly discredited. The political implications of that are obvious. Sinn Féin in Ireland, Podemos in Spain and any number of populist left and right wing parties would be on the march in Europe. Political contagion rather than economic contagion would become a real threat to the euro and the future of the EU itself.

In the face of such a challenge, no government in the entire euro zone or the wider EU, of whatever political stripe, has been prepared to accept Greek demands, although there is a clear desire to keep the country in the euro zone.

The negotiating style of Tsipras and his finance minister, Yanis Varoufakis, exacerbated the problem and even potential allies such as France and Italy were quickly alienated. While the EU is good at last-minute fudges, time is running out for Tsipras to take up Kenny’s suggestion of copying the Irish approach by modifying the proposed deal with proposals of its own and seeking a “reprofiling” of its debt rather than a write-off.

At his post-summit press conference the Taoiseach was clear that he did not favour debt write-off, as the Greeks are demanding, but would support efforts to mitigate its impact down the line. He was also anxious to reject claims that Ireland was being particularly negative towards Greece, saying other leaders had taken a more robust approach to Tsipras.

Kenny emphasised that if the Greeks could come up with a deal acceptable to euro zone finance ministers today, funds would be freed up to keep Greece afloat for another six months while discussions continued on a third bailout.

Nonetheless, Kenny and Minister for Finance Michael Noonan are clearly impatient with the Greek negotiating stance and are determined to show the Irish electorate the implications of following the Greek line. There is also the small matter of the €350 million the Irish taxpayer has lent to Greece as part of the last bailout. A debt write-off would mean there would suddenly be a hole in Government accounts and an extra €350 million would have to be found to plug it.

Any new deal would probably involve more Irish borrowed money being piled on top of that. Joan Burton put it bluntly: “When Yanis Varoufakis asks the Irish people for solidarity, he also needs to persuade us that any support we give will be money well spent. We also need to be persuaded that the Greek government will keep . . . the undertakings given to small countries such as Ireland who are themselves under fiscal pressure. And so far the case made . . . is less than persuasive.”

Fianna Fáil appears stranded in no man’s land on the issue. Party leader Micheál Martin was highly critical of the Government’s stance on Greece in the Dáil during the week. “The effort of the Greek government to secure a reduction in the impact of its debts is reasonable and it is one we should be supporting, rather than joining the hardline effort to say ‘No’ to everything,” he told the Dáil. How it makes sense for the party that negotiated the €64 billion Irish bailout to demand a debt write-off for Greece suggests a level of confusion that could come back to haunt it when the election comes around.