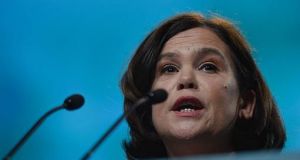 Mary Lou McDonald: she will have to adopt a more subtle approach if she wants to fulfil her ambition of leading Sinn Féin into government in the Republic for the first time

Sinn Féin and its new leader Mary Lou McDonald face a defining moment in the latest round of talks between the Northern parties which began on Wednesday. If the party can work out a deal with the Democratic Unionist Party (DUP) it can realistically aspire to be in government in the Republic at some stage, and possibly even after the next election.

If it is not able to find a way of compromising in the North it will be a clear signal that the party is not capable of government on either side of the Border.

Failure to agree will also be a sign that Sinn Féin is still under the thumb of the shadowy IRA army council which its opponents allege still calls the shots on all major issues.

Of course agreement will only be possible if the DUP also shows an equal willingness to do a deal, and there are elements of that party, particularly among its Westminster MPs, who appear to have little interest in restoring the power-sharing institutions at Stormont.

The bottom line is whether the two parties can put aside the notion that compromise of any kind represents a defeat, and instead approach the talks with the objective of getting the best deal possible for their supporters.

McDonald is taking over Sinn Féin at a time when the party appears to have lost direction. While it has 23 seats in the Dáil its style of opposition has failed to inspire, and its emphasis on a campaign for a united Ireland doesn’t strike a chord with many voters in the Republic.

The absence of the party from government in the North has deprived it of its main platform, and the prospect of indefinite rule from Westminster is hardly going to improve the position.

The days when Gerry Adams and Martin McGuinness walked in and out of Tony Blair’s Downing Street at will and dominated the media headlines are now a distant memory.

Sinn Féin had a chance to recapture the momentum of those days when last year’s British general election resulted in stalemate. If the party had abandoned its long-outdated policy of abstentionism and taken its seats at Westminster it would have attracted enormous media attention.

More importantly, it would have enabled the party to play a pivotal role in deciding who formed a government. That would have allowed Sinn Féin to represent the majority of people in the North who voted against Brexit rather than letting the DUP, who represent the minority on that issue, call the shots at Westminster.

Given that Sinn Féin MPs avail of their allocated offices at Westminster, taking their seats would hardly have been a huge move, but the opportunity has now well and truly passed.

It means the restoration of the power-sharing institutions at Stormont now represents the only realistic way Sinn Féin has of playing itself back into a significant political role.

When she was formally unveiled as the new leader last weekend McDonald said her ambition was to see Sinn Féin in government on both sides of the Border. The current talks will test the seriousness of that ambition.

If the party doesn’t strike a deal at Stormont then neither Fine Gael nor Fianna Fáil will be under any pressure to consider coalition with Sinn Féin if the next election in the Republic results in another stalemate. If the party is in government in the North the dynamic could be very different.

The two big parties in the Dáil currently suspect each other of being willing to abandon their opposition to coalition with Sinn Féin if the conditions are right.

Taoiseach Leo Varadkar’s wearing of the green jersey in the negotiations over Brexit and Tánaiste Simon Coveney’s reference to a united Ireland has prompted some in Fianna Fáil to conclude that the way is being prepared for a coalition with Sinn Féin if needs must.

Most Fine Gael TDs reject this analysis, and say it would be political suicide for their party to bring Sinn Féin into government as it would undermine a key element of its core appeal to middle Ireland. Instead they suggest that the logical coalition partner for Sinn Féin is Fianna Fáil given the nationalist sentiment which forms part of the appeal of both parties.

While Fianna Fáil leader Micheál Martin has resolutely set his face against coalition with Sinn Féin, a number of his TDs have publicly proclaimed their willingness to do a deal if the numbers add up. That could mean real problems for Martin if the next election creates that opportunity.

Whether McDonald has the political capacity to exploit Sinn Féin’s opportunity if the next election leaves the party with the balance of power is another question.

Her aggressive Dáil performance has propelled her to the party leadership, but it is a double edged sword. Focus group research conducted for The Irish Times before the last election showed that whilst McDonald’s style strongly appealed to many working class voters it alienated middle class voters.

As party leader she will have to adopt a more subtle approach if she wants to fulfil her ambition of leading Sinn Féin into government in the Republic for the first time.