‘The most successful political leader in independent Ireland, Éamon de Valera, specialised in snap elections, designed to catch his opponents off guard, and it generally worked’ 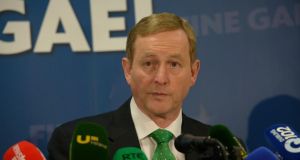 ‘Much will depend on whether opinion polls, public and private, indicate that the two parties between them have a realistic chance of getting close to the 79 seats required to form a government in a November election.’ Above, Taoiseach Enda Kenny. Photograph: Brenda Fitzsimons / THE IRISH TIMES

Enda Kenny will have to make one of the biggest calls of his political life in the next month or so – whether to throw caution to the winds and call an election soon after the budget or hang on until next spring.

His official position is that the Fine Gael-Labour Coalition will run its full term, with an election in March close to the last possible moment of the 31st Dáil, but that is something the Taoiseach has to say until he actually names the day.

Kenny’s political skills have been widely underestimated again and again throughout his long career. He has confounded his legion of critics by proving to be a durable party leader and, far more important, being a successful taoiseach at a time of national crisis.

Becoming the first Fine Gael taoiseach to win a second consecutive term would put the seal on a remarkable career that has already spanned four decades. The timing of the election will have a vital bearing on whether he can pull it off.

The general assumption in the political world is that early March remains the most likely date for the election, even though running the clock down close to the last possible moment used to be regarded as a dangerous cul de sac to be avoided at all costs.

The most successful political leader in independent Ireland, Éamon de Valera, specialised in snap elections, designed to catch his opponents off guard, and it generally worked.

However, Bertie Ahern took the opposite tack and twice ran right up to the end of the Dáil five-year term. The tactic paid off for him in 2002 and again in 2007 even though it seemed for much of the campaign that he would not pull off three election victories in a row.

The dilemma facing Kenny is whether to cut and run after the budget or wait until spring by which time unforeseen events could have poisoned the political atmosphere for the Coalition parties as they did in the first half of 2014.

In the four or five weeks after the Dáil returns on Tuesday the Government will be in a powerful position to set the political agenda. It will start with the announcement of the capital programme next week involving a variety of good news announcements covering every constituency in the country.

The following week budget speculation will inevitably dominate the headlines with more leaks about cuts in the Universal Social Charge (USC), major initiatives on childcare and concessions for the self-employed.

The full details will be unveiled by Michael Noonan and Brendan Howlin in the Dáil on October 13th and formal budget debate, followed by the Social Welfare Bill and the Finance Bill will occupy the following weeks.

While the benefits in the budget will not filter through until the New Year, some of Kenny’s TDs believe he should strike while the iron is hot rather than waiting and allowing the initiative to slip as winter turns to spring with negative stories inevitably filling the gap in the news agenda.

Fine Gael and Labour TDs have sensed an improvement in the public attitude towards them over the summer. If this is confirmed in opinion polls over the coming month the momentum for an early election could prove unstoppable, particularly as both parties in government have virtually completed their preparations for the campaign.

An added bonus is that the seemingly in inexorable rise of Sinn Féin appears to have plateaued. The ongoing controversy arising from the Kevin McGuigan murder in Belfast may not impact hugely on public opinion in the Republic but it has tied up the Sinn Féin leadership in dealing with an issue which can hardly be positive no matter how it is viewed.

The strongest argument against an autumn election is that the impact of the budget will not be felt in people’s pockets until January. One of the central problems facing the Coalition is the widespread public feeling that while economic recovery is well underway the benefits have not filtered down nearly enough.

For instance the latest Ipsos MRBI monthly tracker poll for August shows that 59 per cent of people believe the economy has improved but only 15 per cent feel they have personally benefited from the recovery.

One problem about a November election is that the banking inquiry would go into abeyance. However, given that holding all of the main protagonists to account in public hearing has now been completed it is arguable that it has discharged its main function.

More importantly some Government TDs believe the election should be left until the last possible moment so that the maximum impact of the recovery will be felt in people’s pockets at the time of voting.

While the Taoiseach has the constitutional prerogative of deciding when the election will be held, he will obviously have to take the views of Tánaiste Joan Burton and her Labour colleagues into account.

Kenny has been a successful Taoiseach precisely because he has made coalition work and he won’t want to undermine the prospect of another deal with Labour by bouncing the party into an election against its wishes.

Much will depend on whether opinion polls, public and private, indicate that the two parties between them have a realistic chance of getting close to the 79 seats required to form a government in a November election. If they are still very far off the mark the temptation will be to hold off until the spring in the hope that something will turn up, but if there is any realistic chance of making it there is no good reason to wait.

5 Oprah with Meghan and Harry: One by one the bombshells drop