Say it again, Sam – Remembering Sam McAughtry, who would have been 100 this week 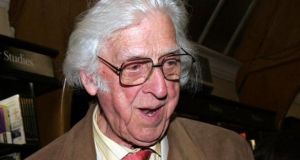 Sam McAughtry: Born in Belfast on March 24th, 1921, just weeks before the Government of Ireland Act introduced partition, he lived for most of the divided century that followed. Photograph: Eric Luke

The writer and broadcaster Sam McAughtry, formerly of this parish among others, would have been 100 on Wednesday. Born in Belfast on March 24th, 1921, just weeks before the Government of Ireland Act introduced partition, he lived for most of the divided century that followed. But as it happens, this week is a double anniversary, because he died on March 28th, 2014. To borrow an analogy from a game he played only once, he was bowled out for 93.

By his own account, his first and last game of cricket had been dominated not by the bat but by desperate attempts at fielding. Aged 16 then, he was wearing new white flannels his mother bought for the occasion and thought himself dapper until he saw the “fine weave” of his team-mates’ outfits at which point he became mortified by his own “hessian sacking”. For the rest of the game, he wrote: “I deliberately flung myself at impossible balls in order to cover myself with grass and soil stains.”

His preferred sporting turf was the kind horses ran on and, thanks to a life-long fondness for betting, his knowledge was sometimes encyclopaedic. Attending the 1981 Irish Derby, for example, he could recall that Shergar’s great-great-grandmother, Diableretta, had won seven races in a row in 1949 and that had backed her every time then until he “had the shakes from drinking” the proceeds. Cannily, he did not bet on her ill-fated offspring at the Curragh – the odds were too short. He instead took the better price on Cut Above to finish second, which it did.

Culturally, McAughtry was at least as green as those post-match cricket trousers. He loved Ireland, north and south. But he was also a recovering Orangeman, having joined the Earl of Erne lodge in 1946 and – a bit like the cricket - left the same year, without ever marching on the Twelfth.

Politically, he was a small-u unionist, in more ways than one. He would have voted for the British Labour Party, if given the choice. And he was an ardent supporter of the Irish Congress of Trade Unions, “one of the greatest forces for good” on the island. It was all these things and more that persuaded his fellow Belfast Protestant Douglas Gageby to hire him as an Irish Times columnist in the early 1980s, explaining the North to the South.

McAughtry was one of 10 children raised in the loyalist Tiger’s Bay area by a merchant seaman father and a “wild religious” mother. Four of his siblings died early, while the uncertain benefits of being a member of Northern Ireland’s majority, if you were poor, were underlined when he failed to secure a job in the Belfast shipyards from the “mafia” who decided which Protestants were hired.

Another pivotal event of his teenage years was the death of an older brother at the hands of a German cruiser in 1940. The trauma was described decades later in McAughtry’s first book The Sinking of the Kenbane Head (1977). In the meantime, he joined the RAF to avenge it. After the war, he returned to Belfast and spent his severance pay, as he recalled, “hitting the bottle”.

He nearly became an RUC man then, until the threat of a rural posting, helping farmers “count pigs and chickens” for their census forms, put him off. Ironically, he instead got a civil service job the North’s department of agriculture, doing something similar.

Summing up in 1983, McAughtry described himself as “the voice of leftish Ulster Protestantism, inclined towards trade unionism, the Workers’ Party, and a bit of a gamble, but not above staying in Bloom’s Hotel”. Another characteristic McAughtry he self-diagnosed was disregard for authority, (although he stood for election to the Senate and won).

His irreverence was a feature of one of his early pieces for this paper, “An Evening with Charlie” (1981), which described a press dinner at which the then leader of the Opposition, Charlie Haughey, held court.

He found himself deep in conversation with Haughey at one point, and conscious that they had an audience: “Naturally, people were watching the two of us closely. The tension between us was too obvious to be missed. Heads tilted in our direction as, with the preliminaries over, I put to him what to me was the only question that mattered. I didn’t mince a single word: ‘Have you anything good for Ascot?’ I asked simply and directly.”

Haughey did have a tip, it turned out. But the horse failed to oblige and McAughtry lost a “Six-county fiver” on it. As a result, like Garret FitzGerald, he questioned whether the Fianna Fail leader’s judgment could ever be trusted with running the Irish economy.