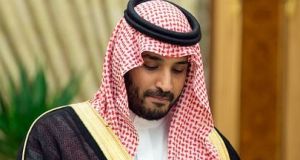 Mohamed bin Salman: since the advent of the Trump administration, bin Salman has been charged with making deals under the table with Israel and the US with the aim of removing Palestine and Palestinians from the world map. Photograph: Getty Images

Some Arab rulers remain in lock-step with Saudi Arabia following the October 2nd murder in the kingdom’s Istanbul consulate of dissident Saudi journalist Jamal Khashoggi, even though this atrocity has fanned popular fury against the Saudis across the Arab world. US president Donald Trump has fanned the heat of Arab anger by giving a free pass to Saudi crown prince Mohamed bin Salman, arguing he may or may not have ordered the killing.

Leaks by Turkish dailies have provided proof he had. The latest is a report in Hurriyet that a recording is said to have been made by the US Central Intelligence Agency of a phone call by bin Salman to his brother Prince Khaled, Saudi ambassador in Washington. During the call bin Salman said that Khashoggi had to be silenced “as soon as possible”.

In spite of these revelations Trump has conferred on Riyadh, the Saudi capital, leadership of the Arab world in the absence of Cairo, Baghdad, and Damascus, traditional competitors for regional stewardship. Yet while the leader of the Arab world has always had popular respect and support, Saudi Arabia has neither.

Last Friday, a symbolic funeral service for Khashoggi was conducted in Istanbul

The Khashoggi murder has focused existing Arab anti-Saudi antagonism on bin Salman. Social media is circulating a great deal of damning material, including a portrait of Khashoggi and a gruesome photo allegedly of his severed head and truncated torso.

The crown prince is referred to as “bone saw”, the instrument used to dismember the body. Turkish media say the saw was brought to the consulate by a member of the hit squad sent by Riyadh to deal with Khashoggi, a Washington Post columnist critical of bin Salman, Saudi Arabia’s de facto ruler.

Last Friday, a symbolic funeral service for Khashoggi was conducted in Istanbul, and prayers for his soul were held in mosques from London in the west to Jakarta in the east.

Fake news castigating the prince has been widely put about. On October 20th, a shadowy Arabic website alawatannews.com claimed bin Salman had been deposed and replaced by a brother. The Saudi news agency did not deign to deny the report.

The Saudis have replied to highly critical coverage by using the pulpit at the mosque in the holy city of Mecca to shore up the legitimacy of King Salman and proclaim his son a divine reformer destined to reinvigorate Islam.

The Saudis have employed social media sites and issued tweets to defend him. The tweets have been dismissed by recipients as “electronic flies” buzzing around their heads.

The murder took place in a climate of anti-Saudi feeling exacerbated by bin Salman’s war on Yemen. Images of starving Yemeni children and bombed Yemeni cities are etched in Arab minds.

Saudi air strikes are blamed by human rights groups for the majority of 57,000 Yemeni civilian deaths, while the Saudi blockade of the country is held responsible for famine and disease which has killed 85,000 Yemeni children.

Many Arabs are inclined to believe the worst about Saudi Arabia as they abhor the luxurious lifestyle enjoyed by the king and princes of the dynasty installed by AbdulAziz ibn Saud, the country’s founder. Many Arabs have suffered abuse while working in the kingdom, and have been deported without pay.

Saudi rulers are accused of making strong statements in favour of the creation of a Palestinian state alongside Israel, while refusing to use leverage against Israel’s western friends provided by oil exports and prices to press for this pan-Arab objective.

Since the advent of the Trump administration, bin Salman has been charged with making deals under the table with Israel and the US with the aim of removing Palestine and Palestinians from the world map.

Until bin Salman assumed power in early 2015, the kingdom had generally adopted a conservative foreign policy and concentrated on cheque-book diplomacy, paying out billions of dollars to win friends by shoring up the faltering economies of Egypt, Jordan and other countries.

Upon his appointment as Saudi defence minister, bin Salman adopted a muscular policy. He provided funds and arms to insurgents in Syria, prolonging a conflict which senior EU and UN sources told The Irish Times should have ended by the close of 2015.

He launched the war on Yemen in the expectation the Saudis and their Emirati partners would score an early victory.

He provoked a quarrel with Qatar, and, in concert with the Emirates and Bahrain, blockaded and isolated the country, dividing the six-member Gulf Co-operation Council.

To prove to the wider world he remains in charge at home and an influential force abroad, bin Salman has embarked on a tour of “brotherly” Emirates, Bahrain, Egypt, Algeria, Tunisia and Jordan ahead of the November 30th G20 summit in Argentina, where he is expected to meet Trump.

He will not be meeting Turkish president Recep Tayyip Erdogan, who says he is committed to exposing the whole truth about the Khashoggi case.