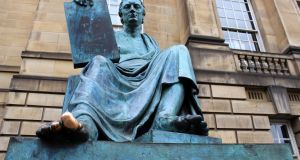 Many Irish rugby fans in Edinburgh this weekend will at some point pass the statue of David Hume, prominently located on the city’s most prestigious thoroughfare, the “Royal Mile”. If they notice it, the superstitious among them may even stop to rub the figure’s right big toe.

When sculptor Sandy Stoddart was preparing the work in the mid-1990s, he correctly identified a public demand for statues of the famous dead to have rubbable body parts. So casting the 18th century philosopher in Roman attire, without shoes, he arranged for the right foot to protrude from the plinth, with a tantalisingly flexed toe.

Stoddart predicted that the rubbing of same would become an “ancient tradition”. He was right. Since its installation in 1997, the toe has been been burnished to a shiny bronze by those in search of luck. Hume, a famous rationalist, may be turning in his grave.

It could be worse. Had the sculptor not been careful, the great philosopher might have shared the indignities of Victor Noir, a 19th-century Parisian journalist killed in a duel, who unwittingly founded a fertility cult thanks to the bronze likeness on his grave having a conspicuously swollen crotch, which is now being shined for all eternity in Père Lachaise cemetery, by women intent on motherhood.

In Verona, a statue of the fictional Juliet has had one of her breasts similarly polished.

And I noticed recently that this trend of inappropriate touching of monuments has extended to Dublin, via the mammarian tourism magnets of Molly Malone.

Rationalism aside, Irish rugby fans might in any case want to think twice before rubbing Hume’s toe. For although the man was undoubtedly possessed of a towering intellect, he was also what we would now call a racist. He considered some peoples innately inferior to others.

Among these were the Irish.

Here he is in his History of England (1773), for example, explaining why this country so badly needed invading in 1169: “The Irish, from the beginning of time, had been buried in the most profound barbarism and ignorance; as they were never conquered or even invaded by the Romans, from whom all the western world derived its civility, they continued still in the most rude state of society, and were distinguished only by those vices to which human nature, not tamed by education or restrained by laws, is for ever subject.”

So at least we had an excuse in his eyes– the failure of the Romans to humanise us.

Perhaps too, in life, some Irish people just rubbed him up the wrong way. Still, confronted with his smug, Roman toga-wearing features, I might be inclined to boycott the toe on principle, regardless of its supposed powers.

It is knowledge or wisdom, by the way, that the statue is said to confer. Thus, before tourists picked up on the habit, the superstition was the preserve of local philosophy students, especially before exams.

That being so, it’s the Irish team and coaches, not the fans, who should be rubbing it, before they face this afternoon’s practical in Murrayfield. But then again, in the matter of how to win rugby matches, Joe Schmidt appears to have more knowledge in his big toe than most of his rivals.

Superstition should not enter into it.

Mind you, Schmidt and all other rational explanations aside, the turnaround in results between Scotland and Ireland over recent years has been extraordinary.

Many of today’s team won’t remember it, but there was a time, as recently as the 1990s, when Ireland couldn’t win this fixture. Only a 6-6 draw in 1994 interrupted a sequence of 11 straight defeats – and this during an era when, on paper, Scotland were always at least as bad as us.

Even after that run ended, we still couldn’t win in Edinburgh.

The Scots’ decline, funnily enough, set in soon after the installation of Hume’s sculpture, although the locals’ loss of wisdom about how to beat us may have been influenced by other developments.

That fine sportswriter Vincent Hogan has noted that, in the run-up to our last Edinburgh hammering, in 2001, it was suspected there had been surreptitious surveillance of the Irish training sessions.

So in 2003, new coach Eddie O’Sullivan left a decoy list of lineout calls, accidentally on purpose, in a bin near the training base. Scotland’s subsequent performance suggested that, to paraphrase Pope, a little planted misinformation can be a dangerous thing. Ireland won 36-6, and have been (almost) unbeatable in the fixture ever since.