Scientifically informed coverage of climate change really works, but it doesn’t stop there 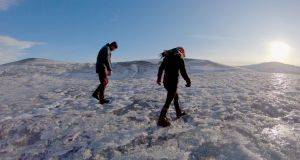 Will Ireland Survive 2050?, presented by Gerald Fleming and Dr Cara Augustenborg, was one of the programmes shown during RTÉ’s Climate Week

What was most remarkable about RTÉ’s Climate Week was not that the climate crisis dominated the news cycle, with relentless daily media coverage on TV and radio, backed up by documentaries, science explainers and studio discussions. No, given all that is at stake, what is truly puzzling is that this is seen as exceptional at all.

This unprecedented media blitz from the national broadcaster is as welcome as it is overdue, especially given the Cinderella status of climate as a topic for the last decade and more. The genesis of Climate Week can most likely be traced back to a dressing-down RTÉ’s director-general, Dee Forbes, received at the Joint Oireachtas Committee on Climate Action (Jocca) earlier this year. She promised to do better, much better, and the station has delivered.

And, whatever about saving the planet, this kind of editorial boldness may yet help save RTÉ, as it was a reminder of the unique power of public broadcasting to both challenge and shape our national dialogue.

While far from perfect, the report of the Committee on Climate Action, chaired by Hildegarde Naughton TD, had offered a genuine blueprint for strong climate action in line with the scientific evidence, and should in turn have guided the Government’s Climate Action Plan, which boasts an impressive-sounding 182 “actions”.

It was during the first update report on this action plan that Taoiseach Leo Varadkar recently triggered a storm of controversy when talking up the supposed “benefits” of climate change. Varadkar argued he was merely talking off the cuff, yet his gaffe betrays a worrying complacency at the highest level of Government.

Some of the so-called “actions” are anodyne in the extreme. One, relating to “the effectiveness of climate-related communications, network building and deliberative capacity”, simply re-badges the long-running EPA climate lecture series.

As RTÉ have proven this week, effective, coherent and scientifically informed climate coverage really works, but a once-off effort like this must be seen as the spark, rather than a substitute, for a coherent all-of-Government plan.

Rapid decarbonisation of all aspects of Ireland’s economy, from transport and energy to our homes, institutions and agricultural systems, is probably the biggest, most complex challenge we have faced since the foundation of the State.

Changes on this scale will inevitably encounter concerted resistance from vested interests and contrarians, and, without a coherent communications plan that wins wide public support, inertia may be impossible to overcome. After all, how can you expect people to change their lifestyles when you haven’t bothered explaining why this is even necessary or important?

The Jocca report argued that education has to be the bedrock of climate action, with a call for a full review of all primary and secondary curricula. The committee was also worried that without effective and sustained communication and education strategies in place, “the necessary policy interventions may quickly become unpopular, leading to substantial challenges in implementation”.

Well-funded, sustained public awareness campaigns such as those run by the Road Safety Authority have, on the other hand, proven to be successful, and the Jocca report argues for “a significant awareness-raising programme by Government”.

While there is no mention of any such programme in the Climate Action Plan, a spokesperson for Richard Bruton’s Department of Communications, Climate Action and Environment says the Government “will design a nationwide communications campaign early next year”. No further details were forthcoming, other than to note a number of ongoing environmental initiatives also being supported.

Some 10 years ago the then-government rolled out the “Power of One” campaign, backed by a €10 million budget. Its aim was to change individual behaviour and so reduce fossil fuel usage. A follow-up study by the ESRI found it had “no persistent effect” and any behavioural changes were short-lived.

This experience is a clear warning to the Government that pushing the onus on individual behavioural shift while failing to fundamentally reform a system that locks the public into high-carbon lifestyles is again doomed to failure.

The Jocca report also urged that the Broadcasting Authority of Ireland be empowered to impose climate quotas on all licensed broadcasters, as is already the case for news, current affairs and the Irish language. It further warned that advertising pressures “cannot undermine broadcasters’ obligations to climate content”. Regrettably, this advice has been ignored.

As a stark reminder of what is now on the line, President Michael D Higgins warned last week that humanity is “at the precipice of a global ecological catastrophe”. Failure to plan now means planning for the bitterest failure in the decades ahead.