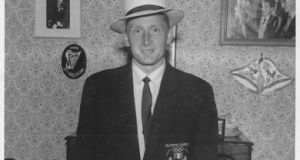 Irish Olympian Willie Dunne. Thursday was the 60th anniversary of the Rome race.

Walking along Dublin’s Parkgate Street one day last Christmas, in what now seems a different world, I spotted a familiar figure approaching on a bicycle.

He was moving in no hurry so, on a whim, I had time to get my iPhone out and record a short clip of him as he cycled by, his high-vis jacket lighting the December gloom.

As he disappeared slowly over the horizon, you could see the top of the Wellington Monument among the trees of the Phoenix Park.

It was a suitably heroic backdrop, because the figure on the bike was himself a bit of a monument, albeit a small one.

In the subsequent Twitter post, I write: “People you see in Dublin. The man passing on the bike here is Willie Dunne, who ran the 1960 Olympic Marathon in Rome. Multiple national champ[ion], career best 2:14.35. Now 86 and proceeding at a stately pace to @DonoreHarriers in Chapelizod, where he’ll probably run a few laps of the track.”

The clip went mildly viral then, clocking up 50,000 views.

But in the strange year that followed, when the concept of going viral reverted to its more disturbing roots, I hadn’t seen Willie since, which was worrying.

Never mind pandemics, I used to fear for him as a cyclist in Dublin – indeed with the speed many drivers go at, I fear for us all.

But of course, there was the other concern too. I hoped he was minding himself well.

Happily, he was, and he has survived to see his life celebrated this weekend, when two major milestones coincide. Thursday was the 60th anniversary of the Rome race and next Tuesday, Willie turns 87.

In between, in a socially distanced ceremony on Sunday, he will be the official starter to a club tribute race, in which the latest generation of Harriers, the juveniles, will run a marathon in 26 instalments.

I’m delighted to learn too that my fleeting Twitter video is playing a modest part in commemorations.

It is now the wraparound of a short film by Donore stalwarts Des Gill and Ian Redican, featuring archive footage of the 1960 race – won famously by the barefooted Ethiopian Abebe Bikila – alongside Willie’s own colourful recollections.

One of his favourite memories of the Rome Olympics was borrowing the gold medal from a young American boxer named Cassius Clay and then offering to “fight” him for it.

This would have been a slight mismatch.

Although Willie did start out as a boxer, he was “five feet eight-and-a-half” and somewhere between fly and featherweight.

His conversion to running dates from a summer’s day in 1949 when, as a 15-year-old on the way home from the boxing club, he passed Trinity College, where the annual race day was on.

Athletics were a largely middle-class thing then, and Willie – one of 11 children (including 10 brothers) raised in the Iveagh Flats of Kevin Street – did not normally move in Trinity circles, or even in its ovals. But he did that day, entering a 440-yard event for all-comers and winning the half-crown prize.

He went on to specialise in a rather longer discipline. And it would be all of 23 years later, as an old man of 39, that he ran his career-best marathon in 2 hours 17 (the 2:14 mentioned in my tweet was also officially a marathon, one of his five national titles, but the course was short).

If the Olympics was his most glamorous race, by contrast, it was far from his best.

Three days after arriving in Rome, he collapsed from heat exhaustion. Convinced he had lost all chance of a good result, he then ran recklessly fast early on before fading to finish 42nd. He wasn’t the only one suffering from the heat.

He “got a job” at the finish line, he recalls, helping other exhausted runners “into ambulances”.

He later became friends with the great Bikila. At a marathon in Spain a few years later, when Willie was “pushed into a ditch”, it was the Ethiopian who pulled him out. He got much closer to him on that occasion, finishing fourth.

Cocooned since the the pandemic and battling an eye ailment, I’m told, he has not been cycling outdoors of late “in case I hit something”.

But still the elite athlete, he now has a bike machine instead and spent an hour on it on Thursday to mark the anniversary. That was a special treat. He normally does two hours.

I hope to see him cycling along Parkgate Street again sometime soon.

If he does, in one of the pandemic’s small upsides, he will have the belated protection of a bike lane.