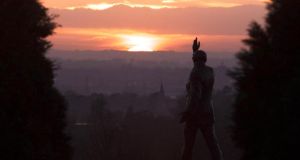 In Belfast and elsewhere, we must move “from conflict to greater communion bringing the joy of the Gospel into our troubled world”. Photograph: Alan Betson

Two recent publications have highlighted the significance of sectarianism and the responsibility that falls on Irish churches in addressing this embedded reality of life in Northern Ireland.

Sectarianism in Northern Ireland: A Review, an independent report by Prof Duncan Morrow, was launched at a major conference in Ulster University on May 14th last which was addressed by Senator George Mitchell. Unity Pilgrim: The Life of Fr Gerry Reynolds, CSSR, written by Gladys Ganiel was launched at Clonard Monastery on May 22nd.

Both of these publications highlight the critical responsibility that falls on Irish churches to repent of their historic contribution to the “common predicament”, as noted by Morrow, where everyone in Northern Ireland “was raised in a society where sectarianism was ‘built in’ to normality”.

From this position of repentance, involving a total change of mindset, the churches urgently need to explore together how they may best contribute to combating sectarianism and to a shared and flourishing future for all in Northern Ireland and indeed on this island.

Gladys Ganiel, at the launch of her very relevant book, observed that Fr Gerry Reynolds’s “public ministry was in some ways a signpost for the future of Irish Christianity”. He had a vision, she said, which was “one of an island reconciled, and not just politically.

For him it was perhaps even more fundamentally a vision of an island on which Catholics and Protestants recognised each other as sisters and brothers and were in full communion with one another.”

Reynolds was a prophetic Christian leader: as Rev Dr Ken Newell, former Moderator of the Presbyterian Church in Ireland, stated at the launch, Reynolds “faced up to the challenges of ministering in a violent and divided society in which few seemed concerned about Christian peacemaking or ecumenism”.

It is well past time that the churches, as institutions, “face up” to the central ministry of reconciliation of the Church of Jesus Christ. The Morrow review provides evidence of the stark situation of segregation and a deeply divided society.

It states, for example: “The Good Friday [Belfast] Agreement contained a commitment to support both integrated education and shared neighbourhoods. The evidence of recent years is that commitment to integrated education has been set aside through a combination of political indifference – or hostility – and budgetary challenges . . . over 90 per cent of pupils at all levels in Northern Ireland are educated in overwhelmingly separated environments and there has been little change since the agreement.”

At the root of such indifference and division in which prejudice and fear predominates is the failure of the Irish churches to engage in a fundamental analysis of their historic theologies which underpin segregation and its consequence: sectarianism.

Yes, there have been remarkable and prophetic figures in each of the religious denominations who have sought to challenge existing toxic theologies but the churches as institutions together have not admitted officially that they have a shared critical problem for which they bear substantial responsibility.

A courageous and costly response is called for in the form of investing in developing a new common ecumenical and contextual public theology which will have at its centre the Good News of love, non-violence, reconciliation and human flourishing.

Such a theology, I believe, will be necessary underpin the valuable recommendations made by the Morrow review. Warm personal relationships among our church leaders and their ability to issue joint statements calling for others to act with courage are to be welcomed but much more is required: a critical theological task confronts church leaders given the sectarian context in which they must lead.

The theological roots of sectarianism must be tackled and, for that to occur, we need critical analysis of the bad theologies which have led to sectarianism, segregation and indeed to violence.

I recollect the words of Archbishop Eamon Martin in the Church of Ireland St Patrick’s Cathedral, Armagh, in October 2017, when he stressed the importance of reconciliation between the churches: he observed that those who look upon the churches from the outside “particularly on this island, see a history of division and sectarianism, of intolerance, mutual recriminations and open hostility within the Christian family”.

He argued that we need to move “from conflict to greater communion bringing the joy of the Gospel into our troubled world”.

It may now seem an impossible task for our institutional churches but, as Nelson Mandela once said, difficult and costly challenges “always appear impossible until they are done”.

Dr Fergus O’Ferrall is an author, historian, a former lay leader of the Methodist Church in Ireland and a member of the Irish Times Trust