Rite & Reason: Separation of Church and State benefits all 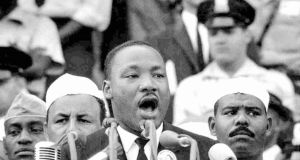 Living in a secular society does not silence the religious, nor does it prevent them from engaging in political activity. Picture: Martin Luther King Jr

In 1968, the New York Times predicted that by “the 21st Century, religious believers are likely to be found only in small sects, huddled together to resist a worldwide secular culture.”

Thirty years later the author of those words, Peter Berger, suggested that he and other sociologists had got their predictions so spectacularly wrong because of their own bias against religion.

Berger was in many ways correct. The world has grown increasingly secular.

Religious organisations have, slowly but surely, seen their political and cultural influence eroded. Establishment religions and State churches have haemorrhaged hundreds of millions of members.

Yet counter-cultural forms of religion that demand intense, even fundamentalist, belief have continued to grow rapidly.

Nominal religion has declined, but convictional passionately-held religion has dramatically increased. Interestingly, a similar process has occurred within atheism. In the last 50 years the raw number of self-professing atheists worldwide has decreased sharply – largely due to the collapse of Communism.

Yet this decline in ‘nominal atheism’ has been accompanied by a rise in the visibility and influence of those who passionately hold atheism as a convictional belief.

It appears that our increasingly secular and globalist world, while unfriendly to nominal religious and anti-religious institutions, is a fertile environment for both true believers and true unbelievers!

Popes and archbishops (of various denominational stripes) regularly condemn the bogeyman of secularism as a social evil that threatens to destroy religious faith, yet the evidence increasingly points to a very different conclusion. Secularism seems to fit many religions very well.

Heiner Bielefeldt, UN Special Rapporteur on Freedom of Religion and Belief, has made an important distinction between ‘doctrinal secularism’ and ‘political secularism.’ Doctrinal secularism refers to the desire to eradicate religion from the public sphere altogether.

Political secularism, however, refers to the ideal of the separation of Church and State. By this definition, secularism refers to a society where religion is afforded no special privileges, but nor is it subjected to any special restrictions or penalties. In this understanding of secularism, the religious should have the same rights and opportunities as would similarly-sized groups of vegetarians, atheists, or any other voluntary associations.

Living in a secular society does not silence the religious, nor does it prevent them from engaging in political activity. Martin Luther King Jr was an evangelical Christian minister whose religious beliefs informed and motivated him to produce beneficial societal change, but to do so by inspiring others rather than enforcing religious dogma on them.

Similarly, William Wilberforce’s evangelical faith caused him to spearhead the fight against slavery in Britain, and also to co-found the animal welfare organisation that became the RSPCA.

Some people react with confusion when I introduce myself as ‘a Christian Secularist. ’ I have been asked, in all seriousness, if such a thing is possible. Yet I would argue strongly that a secular society, with a firm separation between Church and State, is beneficial for both society and the Church.

Reforming movements often did little better. Protestants such as Luther and Calvin ended up participating in Church/State alliances that were often as violent and intolerant as the systems against which they protested.

My American friends wax lyrical about the Pilgrim Fathers who crossed the Atlantic in search of religious freedom, yet it took less than 60 years before they started hanging Quakers and burning suspected witches.

Some might argue that this shows religion to be a force for evil that needs to be eradicated, but the 20th Century demonstrated that atheists behaved with equal savagery when they found themselves in a position of power. The problem lies not in religion, but in our human condition.