‘Right to offend’ does not require journalists to offend

Does choosing not to publish offensive images of Muhammad really infringe our right to information? 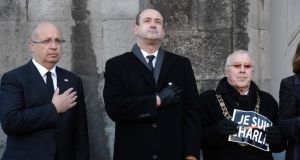 French ambassador to Ireland Jean-Pierre Thébault, with NUJ representative Gerry Curran, and Lord Mayor of Dublin Christy Burke, at a gathering in Dublin in solidarity with the people of France following the murders in Paris. Photograph; Dara Mac Dónaill/The Irish Times

In the wake of the Charlie Hebdo massacre, there have emerged radically opposed perspectives on the magazine’s “right to offend”, and both how and whether to defend its position.

Some argue that the decision by most Irish newspapers not to reproduce the more provocative Charlie Hebdo cartoons is a betrayal of free expression. By failing to do so, it is argued, the mainstream press (in France as well as here) left Stéphane Charbonnier and his colleagues isolated and vulnerable. According to this view, there’s a moral duty on the whole Irish media to stand up to terror by sharing the threat.

In the opposite corner, Dr Ali Selim, a leading Muslim theologian, invokes the blasphemy provisions in the Defamation Act and threatens legal action if any Irish paper should publish the cartoons. For him, as for the vast majority of Muslims, the cartoons are gratuitously offensive as well as grossly blasphemous.

Dr Selim condemns the Paris massacre forthrightly. He also has a record in standing up for journalistic freedom. In 2007 he helped the Irish part of the campaign to free BBC journalist Alan Johnston, who was kidnapped in Gaza.

Each side is motivated by a strong ethical sense and would be doubly offended if the alternative view prevailed. But each also needs more analysis.

Charlie Hebdo certainly saw itself as defending free speech; but in a deliberately provocative manner. It has described itself as a “journal bête et méchant” [silly and rude newspaper]. Like Jyllands-Posten in Denmark, it countered the Muslim prohibition on images of the prophet by printing the most offensive images of Muhammad it could provide.

Of course the Islamic ban is a limitation on the cartoonists’ freedom. And a liberal society allows one the right to publish a silly, rude newspaper, if one can find readers. Without question, nothing it did justified the slightest violence against Charlie Hebdo.

Is this the real front line?

Charlie Hebdo has a reputation for ridiculing all belief systems equally, and both Christianity and Judaism come in for quite a lashing in its pages. But its even-handedness has been questioned. Charlie Hebdo writer Maurice Sinet was fired for anti-Semitism over a column which alleged the son of a politician was going to convert to Judaism before marrying a rich Jewish heiress. “He’ll go far in life!” added Sinet.

Most would probably agree that this snippet carried heavy anti-Semitic overtones and that Sinet was justly punished. But the sheer vehemence of the magazine’s Muhammad campaign suggests to many Muslims that the paper punishes anti-Semitism while indulging in Islamophobia.

If the bona fides of Charlie Hebdo may be questioned (and Charlie Hebdo certainly questioned other people’s bona fides), what of the reaction to this issue by the vast majority of Muslims? Here too there are issues which need to be disentangled.

First of all, non-Muslims need to recognise that Islam (especially Sunni Islam) is a deeply aniconic religion: it shuns religious pictures as part of its opposition to idolatry. This is a very deeply and sincerely held view based on the hadith, the most important source of Islamic theology after the Koran itself. The vast majority of Islamic art is abstract and geometrical rather than representational. Islam remains a diverse religion, however, and there are different interpretations of this and other theological issues.

In previous centuries, Islamic rulers have commissioned representational pictures of religious figures, even including the prophet himself. And the approach to imagery has changed over time. The feudal influence of Saudi Arabia, funded by oil money, operates to make rules more rigid and to reduce respect for those outside the faith.

The Charlie Hebdo cartoons are of course crude and secular by contrast.

Muslim leaders such as Dr Selim have drawn attention to the racist subtext of many of these drawings. This might be a more effective means of countering their effect than resorting to threats to use the blasphemy provision. After all, that legislative amendment was highly controversial when Dermot Ahern added it at the last minute to the 2009 Defamation Act, and there are moves to delete it.

Calm, reasoned discussion may be the only way we resolve any of these problems.

Ronan Brady is a journalism lecturer at Griffith College and was one of the organisers of the NUJ’s Je suis Charlie commemoration on Saturday.

1 Covid-19: Museums, cinemas set to reopen next week as Varadkar warns of New Year restrictions
2 Stir-crazy Dutch holidaymakers set to descend on Caribbean island
3 Bloomberg ranks New Zealand top in fight against Covid-19 - but how did Ireland fare?
4 Alison Curtis: My guilt at not going for a second pregnancy
5 How to gift your child a house deposit . . . tax free
Real news has value SUBSCRIBE