Images we share help us connect with other parents, with friends, with acquaintances who might be going through the same thing 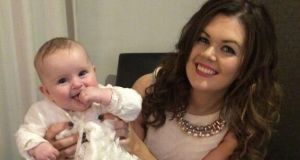 Nicola Cassidy: Our social media reflects us. And we should not be made feel guilty for wishing to share or connect in the first place.

When my baby was born two years ago I put a strict media photo ban in place. A hospital shot was allowed. The released photo showed her, Anne Geddes inspired, asleep on a blanket, on my chest. And as she lay snuffling, waking, stretching, doing beautiful newborn yawns, I couldn’t help but stare at my phone at the image of her. While she was in my arms.

The ban continued for many months. Instagram accounts of friends and family were monitored to ensure no breaches of stated baby photo policy. Agreed terms were applied as to when and what could be posted on Facebook for milestone events. We were protecting her. We didn’t wish for her image to be plastered across accounts for people to scroll by, to not care about or to judge. We didn’t want her out there. She belonged to us, in private.

And then something happened. The arrival started to grow up. She got old enough to leave the confines of our baby bubble home and venture out into a world where other people, strangers, could look at her. We trusted the family members and friends she was with to look after her on playdates, on sleepovers on trips to the playground or park. And as she developed as a person, as she left the baby stages behind and became a whirlwind of personality, we stopped minding if more pictures appeared of her online. Hell, we even started posting a few more ourselves.

An ongoing court case in Austria sees an 18 year old woman suing her parents for posting pictures of her as a baby on Facebook and keeping them on their profiles, despite her requests for removal. The pictures feature her having her nappy changed and potty training. For the love of God parents. Why would you post those pictures in the first place, never mind refuse to remove them at your daughter’s request?

Una Mullally in her recent article Why must parents put pictures of their kids on Facebook? argues that parents do so to take part in a competition, to construct a falsified perfect reality that everyone knows doesn’t exist. But couldn’t the same argument be applied to any single person on social media? Aren’t we all guilty of constructing an online identify simply by our very acts of posting in the first place?

Parents put pictures of their children on Facebook because it reflects their daily life - not a performance, but an actual ongoing existence whereby we spend all of our hours outside of work with our ‘cute’ children. Yes there are smiling pictures and moments we wish to mark, but in between those are posts about exhaustion, wine o’clock and thrashed rooms that were tidy only moments ago. Among all those pictures are who we are. Our social media reflects us. And we should not be made feel guilty for wishing to share or connect in the first place.

The images we choose to share help us connect with other parents, with friends, with acquaintances who might be going through the exact same teething, crawling, night fever problem right at the very same moment. We would never find the solace or the same communication were we to send the odd image through an email or whats app group to our immediate family who we may see regularly anyway. And why would we want to? What have we to hide?

Our children’s privacy is of course the crux of the argument. The finger wagging and judgement implicit in Una’s argument .

Think about how many hours a parent spends protecting their children in a week? The early morning rises and late night checks, the soothing cuddles and nutritious food, the stair gates, the car seats, the chopping of grapes so small that a toddler could never choke, but might need to be watched should a stray partial piece of pulp become lodged in an orifice of the face?

Our children’s welfare is always our priority. We lose sleep over it. We worry and we fret and we are constantly trying to live up to ‘what is best’. Rules laid down by doctors, by health experts, by well-meaning grandparents or relations who tell us how the child should be behaving at this stage. Rules laid down by the media. By opinionated journalists. By ourselves.

That is not to say that there is no merit in checking our online behaviour. Parents should not be posting any images that may harm or embarrass their children in the future. Nor, should they be posting daily or unstoppable streams of their child’s every move across their channels. Mostly because it’s alienating and boring for others to look at. But also, because the child is entitled to develop in some sort of privacy.

As a parenting blogger, how much to share is a responsibility, I and I know many of my blogging counterparts take seriously. Some don’t mention the child’s name at all in their posts. Others, only post pictures where the child’s face is hidden. Contrast this with a UK blogger I saw recently who posted a multitude of pictures of their toddler training on the potty, similar to the Austrian court case. That was unfair. And that, should be judged.

I don’t post every picture I take of my child and I will never post anything that could cause her upset in the future. But we do have the teenage years to look forward. And by then, the cute baby pictures on Mammy’s Facebook page from 15 years ago will likely be the least of our worries. Won’t they?

Nicola Cassidy is a lifestyle parenting and literary blogger at www.LadyNicci.com. She is has a background in politics and media, works in marketing and is an aspiring novelist.