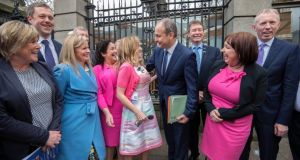 Cystic fibrosis sufferer and campaigner Jillian McNulty with Fianna Fáil leader Micheál Martin outside the Dáil after it was announced that the HSE had reached a deal on the provision of Orkambi. Photograph: Brenda Fitzsimons

Whenever the Government spends money on something it should improve people’s lives. From education to the justice system, building infrastructure to hiring doctors, governments need to make sure all of their policies do good. In an easier world, this would be the only requirement on governments when making a decision. However, unfortunately our resources are finite.

This leaves us in a situation where by spending our resources tackling one problem, we are in practice taking money away from somewhere else, and reducing one good in favour of another. So when government spends money on our behalf it should seek not only to do good, but to do the most good that is possible with every euro spent.

In order to do this within healthcare, many countries try to capture a new treatment’s ability to extend a person’s life and the extent to which it improves the quality of their life. This is often done by using a quality-adjusted life year (QALY). One QALY is equal to one year in good health, and any treatment that either improves the quality or the length of someone’s life will have a positive score.

Even if we increase the amount of tax we pay, we will ultimately come up against a wall where there are only so many hospitals that the country can build and doctors we’re able to support

A UK study found that for every £13,000 (€16,230) the NHS spends on additional doctors, nurses, ambulances, hospital equipment, etc. it can generate one additional QALY. While similar research has not been undertaken in Ireland, there is every reason to believe that the results would be about the same here.

This means that if a hospital spends £130,000 extending a person’s life by a year, they have in practice taken so much money out of the system that it would have been possible to give 10 QALYs to somebody else.

Even if we increase the amount of tax we pay, we will ultimately come up against a wall where there are only so many hospitals that the country can build and doctors we’re able to support. These are not just monetary limits, but limits on people’s time, space and other social resources.

Given the unavoidable fact that we’ll never be able to save every person’s life nor stop every individual from suffering, we must prioritise. The question is: how? There is a human tendency to fund the tangible and easy to spot. When government reduces money spent on preventative care or emergency doctors, we know that some patients will lose out, but we don’t know who.

It is hard to point to the person who died because Tallaght hospital did not have enough trauma doctors on call at 3am. Some would have died anyway, but which ones? Certainly these people do not know in advance that they require a service, and are not in a good position to make emotional pleas.

In contrast, if the State decides not to fund a drug for a particular illness because of high cost, it is easy to point to the people who lose out, and hard to remove yourself from the emotional arguments about the good that funding this drug will do.

When deciding which positive interventions to fund we thus have a choice: we can let politicians decide and put pressure on them to fund the products with the strongest emotional pull, or we can have health professionals rigorously assess the value for money of different interventions, and fund the ones that will help the most people. The second approach seeks to take emotion out of decision-making, which can be hard, but it means that on average people get to live longer, healthier lives.

Last week the Government decided to fund the drug Orkambi. This is a good example of something that greatly improves people’s lives. Orkambi offers a huge step forward for cystic fibrosis (CF) sufferers, it can improve lung capacity by 3 per cent and reduce the number of times that sufferers need be hospitalised by a third.

By choosing to fund this drug, the Government is able to improve people’s lives. Indeed, 10 years of Orkambi treatment are estimated to add 3.2 QALYs on to a patient’s life, when compared with current treatment. But, while I am delighted for Irish CF sufferers who will now have access to this wonder drug, at about €100,000 per year of treatment, I believe the State has made a mistake in choosing to protect the tangible at the expense of the hard to identify.

At this price Orkambi will cost the State about €620,000 for 10 years compared with current treatment costs (this includes the savings the drug generates in lower hospitalisation). This means we will spend €190,000 for every additional QALY that a person with CF receives, about 12 times more than it would cost to achieve the same benefit elsewhere in our health system.

After 10 years of underinvestment, the Irish health system is deeply short of new medical equipment, we are short on doctors, on nurses and we do not have enough hospital beds. At a time when our health system is struggling to stay afloat, we should focus the resources we have, where they can achieve the most good for the greatest number of people possible, rather than cherry-picking people based on how sad their story appears.

1 We need to pay very close attention to what is happening in Britain now
2 Michael Smurfit: ‘I asked Trump to invite me to the White House for my 80th birthday’
3 Covid-19: Two-week quarantine period for arrivals into State could be lifted for some
4 Sideline Cut: Vignette shows why Bird is the true shark in The Last Dance
5 The momentum behind calls to ease lockdown may become irresistible for politicians
Real news has value SUBSCRIBE