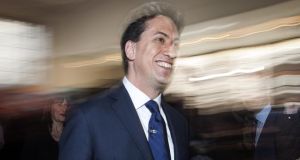 ‘With the hacking scandal and the Leveson inquiry that followed, certain sections of the press have become so out of favour with the public that when Miliband threatened to break up the Murdoch empire his popularity soared.’ Photograph: Dan Kitwood/Getty Images

With the general election a week away, the UK is in the grips of election fever that is being played out in the media like never before. As political parties chase popularity and rely (still) on mainstream news coverage to capture and persuade potential voters so courting the media becomes ever more central to their activities. Some of these media organisations are huge corporations that own large chunks of the media landscape.

Few corporations are more powerful than the transnational media corporations epitomised in the Murdoch Empire.

In the UK just three companies control nearly 70 percent of national newspaper circulation while only five groups control more than 70 per cent of online news consumption measured by browsing time.

Media concentration creates conditions in which wealthy individuals amass great social and political power. Power to direct our national conversations and influence the development of national policies. As the Leveson inquiry revealed, if a nation’s media becomes too close to powerful vested interests then it is less likely to hold that power fully to account and more likely to support those parties whose policies suit their businesses. The larger and more concentrated media empires become, the more concerned politicians are to maintain good relations with owners, senior executives and editors.

In the UK, four successive prime ministers gave evidence to the Leveson inquiry into the press admitting they were “too close” to the big media players because the political stakes were so very high. Such patterns of dominance and influence have resulted in certain public policy areas being avoided or dealt with differently for fear of either hostile reporting or media owner conflict – law and order, drugs, asylum seekers, immigration – take your pick.

In evidence to a House of Lords select committee in 2007 Rupert Murdoch said that he simply acted like “a traditional proprietor” in regard to the Sun and the News of the World. He didn’t interfere except “on major issues, such as which party to back in a general election or policy on Europe” (House of Lords, 2008). On April 21st the London Independent newspaper reported that Murdoch had told journalists at the Sun that if Miliband got into power then the future of the company was at stake. He then directed them to be more aggressive in their attacks against Labour and more positive about the Conservative Party. Concentration of media ownership matters.

In analysis of election coverage in the press published recently on openDemocracy by Oliver Huitson we see the Daily Mail, Sun and the Telegraph entirely in synch with Conservative HQ. They use the same arguments, the same language, the same sound bites. And so, George Osborne is an economic genius and a Labour win would cause wealth creators to flee the country. Why? Because the Labour Party manifesto vows that no one media owner “should be able to exert undue influence on public opinion and policy makers. No media company should have so much power that those who run it believe themselves above the rule of law”.

Is this just the Tory rags? Taking most of the major national news outlets into consideration research by the Media Standards Trust has pointed out that the Conservative party gets the most positive coverage in newspaper leader columns and Labour the most negative. Further analysis from Loughborough University Communication Research Centre reveals how the Conservative Party has not only had the greatest amount of press attention overall, directed to both the party and its leader, but have also been directly quoted the most. So perhaps it should come as no surprise that the Conservative manifesto says nothing whatsoever about the need to ensure that a democracy is supported by a plural and diverse media.

The difference with this election is that is has been preceded by three years of press humiliation – with the hacking scandal and the Leveson inquiry that followed, certain sections of the press have become so out of favour with the public that when Miliband threatened to break up the Murdoch empire his popularity soared. This time Miliband had nothing to lose – his vilification by parts of the press has been relentless: he is weird looking; a geek; clumsy; a North London intellectual; his Dad was a Marxist; he did one over his brother and the silliest one yet – he had the temerity to have other girlfriends before he got married – what a cad.

This election has also been different because of the internet – in the beautiful, bountiful world of the internet where everyone has a voice, anyone can blog, everyone is a producer you would have thought that plurality was no longer an issue. You would be wrong.

Despite the abundance of information available online the mainstream established news outlets still dominate our news consumption across all platforms with increasingly homogenous content. Research shows that the leading websites around the world reproduce the same kind of news as legacy media. The power of multinational media corporations is not dispersed in the age of new media rather new forms of media capital come to the fore.

So much for media working for democracy’s gain. Our ability to exercise our own democratic freedom as ordinary members of the public is premised on the basic fact that governments are not distorted by private interests of multi-media conglomerates. And from what I know about Ireland’s own attempts at regulating against media concentration – you are not out of the woods yet.

Natalie Fenton is Professor of Media and Communications, Goldsmiths, University of London. The above article is an edited version of the talk Prof Fenton gave at the inaugural Media and Society lecture at the School of Media DIT