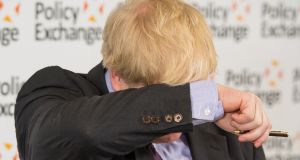 I’m longing for a glimpse of Boris Johnson to see if he managed to keep the weight off over the holidays. Just before Christmas he wrote a diary piece about how he’d been piling on the pounds to the point where he could barely get up a hill on his bicycle, despite the “blast furnace super bellows of his lungs”.

Whatever about the lungs, many of us can surely relate. Boris had ballooned to 16½ stone and the time had come to do something about it.

He’d consulted a French doctor who, if she’s practising in Britain, may well be even now grappling with the notorious 85-page form that EU citizens must now fill out should they wish to continue to live and work in Britain post-Brexit.

Her weighing scales did not lie and Boris wrote of his shame at being “a representative of what is now the fattest nation in Europe”.

He’d agreed to give up his “bathfuls” of booze and follow a strict diet and it had worked! In no time he’d shed 12lbs by replacing Mars bars with nuts and porridge.

Fair play to him. It’s not easy to shift weight during party season when, presumably, flutes of sparkling English wine and pigs in blankets were being thrust at him from every direction.

At the time of writing, he said he was feeling much better. “My sight is keener, the days seem longer” (impressive given the approach of the shortest day of the year) and, out and about at parties, he couldn’t believe how long it took his boozy pals to come to the point.

If only he’d left it there and included the contact details of the French doctor it would all have been fine. But no, his new-found energy had given him a zingy new angle on Brexit.

If, he wrote, and I paraphrase, everyone in British politics could be less slothful and more nimble, less sunk in inertia and able to exercise their willpower, then there would be nothing to prevent Britain facing a hard Brexit with fortitude and, you know, general vim.

Willpower is the key to it all. After all, he continued, if he, Boris, can give up his late-night cheese and chorizo binges then surely the British governing classes can summon “the willpower to do the necessary, to ditch this deal, to bin the backstop and to make the change that will launch us on a nimbler, lither and more dynamic future”.

The slim-down-and-show-a-bit-of-self-respect approach has that same old whiff of nostalgia that clings to so much Brexit thinking.

What historian David Edgerton refers to as a “daft revivalism” which, he says “seems to be at the core of buccaneering Brexiter thinking . . . [promising] a global Britain, a global champion of free trade, a global innovation hub, a military power even in the South China Sea”. Great Britain, great and glorious once more.

Perhaps with his inward eye Boris was looking back to a time when the British people were a lot quicker on their feet and indeed on their bicycles – the postwar era when, it’s claimed, the nation was never healthier than when it existed on rations.

People – slim as whippets and looking marvellous in their fairisle handknit jumpers – put their shoulder to the wheel, were beholden to no one, and built themselves a brilliant self-sufficient Britain, all the while bathed in the sepia tint of a Hovis ad.

It’s no surprise that this gung-ho piece of silliness featured in the Spectator, the Tory-loving political magazine once edited by Boris himself during a lively journalistic career that saw him ridiculing the EU on a constant basis.

The magazine, established in the 1820s, campaigned for Leave in the 2016 referendum and vigorously opposed Britain joining the common market in 1975. “The Spectator has a long record of being isolated, but right” ran its Vote Leave editorial in June 2016.

That stance has been good for business. Subscriptions are climbing and print sales have hit a new high. For Leavers and lovers of the way things were, the Christmas edition hit peak nostalgia with a long piece on the Piccadilly food store Fortnum & Mason, whose monogrammed hampers were sent to Wellington’s soldiers as they fought Napoleon in 1815; to Florence Nightingale to help her nurse patients in the Crimea war; and to heartsick Brits in the colonies just longing for a taste of fruitcake.

Boris doesn’t yet have a plan, or if he has, he’s hiding it well

Another story was filled with regret that the City of London now seems to be full of “tieless, humorous, over-regulated” workers, rather than dear departed good sorts who managed to make pots of money while wearing their regiment ties and running events like the Cresta Run in their spare time.

And, to round off the issue, a “new” PG Wodehouse short story by Ben Schott with ample references to snifters, green baize doors, elderly aunts and a dodgy neighbour called “Mr Johnson” who turns out to have a very bare cupboard indeed.

Which is all very amusing if you’re on the inside track and Nanny used to spank you with her tartan slipper, but not if you’re interested in understanding what it is that Boris Johnson – who, despite his bombast and blunders, is still considered one of the front runners in the race to replace Theresa May as leader of the Conservative party – is thinking about and planning for post-Brexit Britain.

After all, it’s not some far-away event that he can ruminate on forever. It’s happening in March.

Boris doesn’t yet have a plan, or if he has, he’s hiding it well, instead using his new year column in the Daily Telegraph to lambast the Japanese government for its refusal to ban whale harpooning.

He may well emerge from the holidays svelte and steely and ready for battle. But, as any veteran weight-watcher will tell him, the unappetising truth is that those 12lbs that were so quickly shed can sneak back on, and more with them, at alarming speed.

The slothful feeling creeps back, the sofa beckons, you can’t be bothered with more nuts but hello chorizo!

If Boris is relying on weight-loss for a new clear-sightedness on the issue of Brexit, all anyone can hope is that he laid off the turkey sandwiches and After Eights over Christmas and is returning to the fray, lean and hungry and minus his Spectator standard-issue, rose-tinted specs.