Philippe Sands: The Nazis, human rights and me 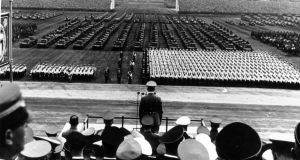 Adolf Hitler addressing a military parade at a Nazi Party Congress in Nuremberg. Xenophobia and nationalism are coursing through the world’s veins. Photograph: Hulton Archive

In the spring of 2010 I received an unlikely invitation from a city in western Ukraine: the law faculty from the university in Lviv (also know as Lwów and Lemberg) asked me to deliver a lecture on my work on “crimes against humanity” and “genocide”, including cases I’d been involved in, my academic work on the Nuremberg trial and the judgment’s enduring consequences.

I had long been fascinated by the proceedings and myths of Nuremberg, a moment that gave rise to our modern system of international justice. But there was another reason for accepting the invitation: it offered a first opportunity to visit the city where my maternal grandfather, Leon Buchholz, was born in 1904. I knew he had moved from Lviv to Vienna during the first World War and that, in 1939, after the Nazis took power in Austria, he moved to Paris, which is where I knew him. That period was a time of darkness and pain of which he did not wish to speak. So I knew nothing of his early life in Lviv or the circumstances of his and my mother’s departure from Vienna.

The invitation from Lviv prompted a summer of research. For the first time I opened doors that would shed light on family history – the circumstances of the departure from Vienna, what caused my grandmother to remain in Vienna until 1941, and the fate of other family members. In the course of a six-year search – an improbable family detective story – I scoured archives across cities far and wide, hired a genealogical detective in Vienna and learned I had unknown family members. I even discovered the identity and story of the remarkable lady who saved my mother’s life, Miss Tilney, an evangelical Christian missionary from Norwich. Why did I carry out the search? “What haunts are not the dead”, wrote psychoanalyst Nicolas Abraham, “but the gaps left within us by the secrets of others.” In parallel with the uncovering of a personal story, the lecture I delivered also took me on a second path, one that explored the origins of two legal concepts that emerged as the second World War drew to a close. I discovered the terms “genocide” (which calls for the protection of groups) and “crimes against humanity” (which seeks the wellbeing of individuals) were closely connected to the same city of Lviv.

Rafael Lemkin, a Jewish, Polish criminal prosecutor, fled Warsaw in September 1939 and made his way to America by the most tortuous of journeys, where he coined the word “genocide” in the autumn of 1944. A year later, he inserted his invention into the indictment of Nazi defendants at Nuremberg, giving practical effect to his idea that “attacks upon national, religious and ethnic groups should be made international crimes”.

At the same time, Hersch Lauterpacht, an academic at Cambridge University who was born near Lviv, came up with the idea of putting the term “crimes against humanity” into the Nuremberg statute, giving effect to his idea that “the individual human being . . . is the ultimate unit of all law”. Lauterpacht, who was also Jewish, is widely recognised as the greatest international lawyer of the 20th century, one of the creators of our modern system of human rights.

As the coincidences piled up – I would learn that Amalia Buchholz, my great grandmother, and Hersch Lauterpacht were born and lived on the same street (Lembergerstrasse) of the small town of Zolkiew, near Lviv, otherwise known as East West Street. I delved ever more deeply into the terrible events that descended upon Lviv after 1939, and came across the dastardly influence of a third man: Hans Frank, Hitler’s personal lawyer and governor general of occupied Poland, who visited the city in August 1942 to deliver a speech that would unleash the murder of over 100,000 Jews and Poles. Among them were the families, friends and teachers of Lemkin and Lauterpacht, and of my grandfather. Three years later Frank was defendant number 7 in the dock at Nuremberg. By a simple twist of fate, he would be prosecuted by Lemkin and Lauterpacht, who only learned late in the trial the man they had in their sights was responsible for the deaths of their entire families, as well as that of my grandfather.

What started as a lecture turned into a double detective story – East West Street – about the interweaving lives of the three lawyers, and the uncovering of my grandfather’s story. It’s hard to imagine a novel that was more improbable. Over seven years I came across a multitude of facts and coincidences, but equally engaging was the lawyers’ shared love of music. Their diaries, letters and notes referred to concerts attended and composers admired.

In the summer of 1946, as the Nuremberg trial came to a close, Lauterpacht and Frank, prosecutor and defendant in the same case, found strength in the same piece of music, Johann Sebastian Bach’s St Matthew Passion. How extraordinary that two men, on opposite sides of the Nuremberg’s Courtroom 600, might find solace in the same musical space.

The Nuremberg trial was the moment when “genocide” and “crimes against humanity” became a part of international law, although 50 more years would pass before anyone would be indicted before an international court or tribunal for these crimes.

Events in Yugoslavia and Rwanda catalysed the change and allowed the International Criminal Court to come into being. In this way, the ideas of Lauterpacht and Lemkin inform my daily work in courts and classrooms. They also touch our political lives. But for their efforts, our right to be treated as an individual – rather than as being of, for example, a particular nationality, religion or sexual orientation – would be infinitely diminished, as would the rights of those who are members of a group to obtain the fullest protection of the law to prevent the fact they happen to be a member of a group to be used as a justification for discrimination, for being singled out, or for other forms of malign mistreatment.

I see it in Brexit Britain, a move to identity politics as one former London mayor offensively evokes Adolf Hitler as a supporter of Zionism and another – now the UK’s foreign secretary – suggests the EU and Adolf Hitler somehow share common aims, while also referring to the US president as part-Kenyan. And I see it in the US, in the election of Donald Trump. “Genocide’” and “crimes against humanity” offer a means to address these new challenges. The terms have lived side by side for seven decades. This double existence reflects our own double identities – as individuals and as members of groups. Both are fully deserving of respect and of protection under the law.

Philippe Sands’s book East West Street has just been awarded the 2016 Baillie Gifford (Samuel Johnson) Prize. He is professor of law at University College London and a barrister at Matrix Chambers. He speaks at Trinity College Dublin tonight