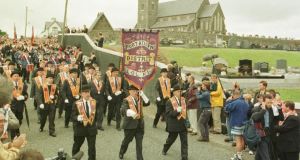 Back to the 1990s .... Portadown District LOL No 1, passing Drumcree church before being blocked. Photograph: Dara Mac Donaill.

Believe it or not, this year marks the 20th anniversary of what has become known as “Drumcree”. It was the stopping of the return parade from morning prayer at Drumcree parish church on Sunday July 9th 1995 which led us into this ongoing crisis over parading in Northern Ireland.

The RUC, then the decision-making body, had approved the parade but as residents of the Garvaghy Road blocked the road the police had no alternative but to stop the parade until matters were resolved. The Garvaghy Road was not cleared until July 11th when the parade returned to Portadown.

The following year the Chief Constable of the RUC, Sir Hugh Annesley, announced that the Drumcree Church Parade on Sunday July 7th would have to return from the church the way they came, that is by the Dungannon Road and the Corcrain Road.

The stand-off and subsequent violence of those two years led to the government establishing the North Commission – its subsequent report led to the creation of the Parades Commission in 1997 with full judicial powers in 1998.

Since its inception the Grand Orange Lodge leadership has refused to have anything to do with the commission and has tried every trick in the book to undermine and attack the commission personally as well as their determinations, even though many members who organise parades co-operate fully with the commission.

We have seen various attempts to deal with the issue of parades. The establishment of various “parade’s strategy committees” by the Grand Lodge, producing numerous reports. In conjunction with the various unionist parties we have had the “unionist forum”, the “Hillsborough Agreement” and last year the “Graduated Response” – all of which came to nothing.

On 15th June last representatives of the Grand Lodge met with the secretary of state and “presented her with a formal request urging her to personally intervene and commence a process to replace the current parading legislation, with an emphasis on ‘fair and equitable’ regulations for all communities.”

This displayed a failure to understand the role of the Parades Commission. Part of the responsibility of the commission is: “To keep under review, and make such recommendations as it thinks fit to the secretary of state concerning the operation of the Act.”

The implication of this is obvious. The Grand Orange Lodge of Ireland should engage fully with the Parades Commission and discuss with them ways in which the current parading legislation could be more “fair and equitable”.

The Grand Lodge representatives also “shared their frustration that nothing had been done by the secretary of state from last year to assist resolving the situation at Ligoniel,” the conflict over parades in north Belfast at Twaddle Avenue.

Again, every trick in the book has been tried by Orangeism and unionism, except the obvious, as stated by Mr Justice Weir when he refused a judicial review in July 2014. He commented: “These issues will require a degree of political leadership and courage; that’s the way they are going to be sorted out, by people sitting down and agreeing with each other ... If a fraction of the energy that is put into litigating these matters or going on the television or radio to talk about them was put into sitting down with clean sheets of paper and nice sharp pencils, I think we would get to the terminus much quicker.”

Mr Justice Weir also said: “Given the lack of concrete progress, no-one could have legitimately expected that circumstances had sufficiently changed for the better in the intervening period to warrant the giving of permission for a parade over the contentious area.”

The Grand Lodge representatives who met with the Secretary of State on June 15th have evidently ignored this clear judicial advice, and have done so at their peril.

At the Drumcree parade on Sunday July 5th last the Grand Secretary, Drew Nelson, acknowledged that violence undermines their fight against the Parades Commission, but there was no acknowledgement that their own persistent violence and bad behaviour continues to undermine both unionism and Orangeism.

1 Coronavirus: Further two deaths in Republic as expert warns against ‘rush’ to ease restrictions
2 We need to pay very close attention to what is happening in Britain now
3 Normal People Class of 2020: The nine college friends in the series
4 Changes to Covid-19 payments to be considered next week, Minister says
5 Army officers evacuated from Goma after weeks of delay
Real news has value SUBSCRIBE