Patsy McGarry: Cost of violence at North parades should be borne by organisers

Eyewitness footage captures the response of the public and the PSNI after a 16-year-old girl was injured when a car mounted a pavement in Ardoyne. 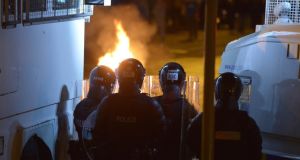 For eight consecutive summers I walked with Orangemen on the first Sunday of July to Drumcree church and to barricades at the foot of the hill there. Year after year I witnessed the rioting supporters of the Orange Order at those barricades.

Loyalist paramilitary Billy Wright being the only Protestant among them.

I had thought violence of that sort associated with Orange marches was a thing of the past, apart from the odd skirmish in Belfast. Last month was a reminder of the dark underbelly that can accompany Orange marches and which the Order allows off the leash when it suits.

During the violence in Belfast on Monday, July 13th last, 25 police officers were hurt and a 16-year-old girl was lucky not to be killed. She was trapped under a car, driven by a man in Orange regalia, which mounted a pavement in nationalist Ardoyne. Police lifted it off of her. She seemed dead. Following the incident a man was charged with two counts of attempted murder.

The violence began when loyalists hurled beer bottles, full cans, steel bolts and stones at PSNI officers and reporters after returning Orange marchers were prevented from going past Ardoyne.

It was worse. The Order’s deliberate lack of action unleashed the thugs once more, such thugs as bedevil both communities in Northern Ireland.

On Sunday, August 9th nine police officers were injured after they stopped a republican Anti-Internment League parade from entering Belfast city centre. An hour later police deployed water cannon when republicans threw petrol bombs, stones and bottles at them. A man (53) and a woman (36) were later charged.

Writing in this newspaper on July 14th last Rev Brian Kennaway, former convenor of the education committee of the Grand Orange Lodge of Ireland, wrote “such persistent violence and bad behaviour continues to undermine both unionism and Orangeism.”

It is true and it is up to unionism and Orangeism to end it. Similarly with republicans and republican parades.

As encouragement to both, the costs of all violence arising from such parades, when not properly marshalled, should be incurred by the organisers.

1 Coronavirus: Further two deaths in Republic as expert warns against ‘rush’ to ease restrictions
2 Normal People Class of 2020: The nine college friends in the series
3 Gardaí disperse crowds gathered at coastal beauty spots
4 We need to pay very close attention to what is happening in Britain now
5 Simple restorative exercises that can improve your posture after all the sitting
Real news has value SUBSCRIBE