Opinion: Where do the parties stand on equal access to primary education?

FG, Labour and FF have decided this is an issue to be engaged with strictly at bargepole distance 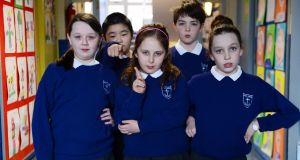 It is old news that 96 per cent of taxpayer-funded primary schools in Ireland are permitted by law to turn away a child on the basis of religion. Stories of baptisms of convenience and of unbaptised children being rejected by school after school in their areas are widespread.

The situation is nothing short of a national scandal. So, with the general election upon us, what are the political parties proposing to do about it? Worryingly little in many cases. The three parties that have formed the backbone of every Government since the foundation of the State have decided this is an issue to be engaged with strictly at bargepole distance.

One wonders whether Bertie Ahern had a hand in drafting Fianna Fáil’s complex education policy document last month, so vague and impenetrable is the language chosen.

It makes positive noises about local school access for all children but then states that while schools will no longer be allowed to prioritise children of a patron’s religion from outside a locality they can prioritise those within the locality. In other words, if a baptised and unbaptised child live next door to one another the former will continue to have a huge educational advantage over the latter.

Put even more simply - schools will still operate on a Catholics first basis but the kids in the admissions category formerly marked “other” will be promoted from third-class citizenship to second-class citizenship.

Labour’s policy is not much better. Again, their manifesto refers to school access based on proximity “rather than focusing on religion” but it is very light on detail. When expanding on Labour’s plans back in December the Minister for Education, Jan O’Sullivan, referred to a system where schools will allow for a certain percentage of places for children not of the patron’s religion. This complicated quota system is dubious in many respects.

First, it means the compromise of children’s constitutional rights to an education and to freedom from State-imposed religious discrimination - human rights cannot be negotiated or bargained for and children should not have to feel merely tolerated in their local school.

Finally, and perhaps most obviously, one is tempted to ask why the Labour Party waited until now to even begin to recognise the educational rights of children not of a patron’s religion.

In the Dáil on 2nd December Labour TDs voted en masse against equal school access. For the past five years the party has enjoyed its largest ever Dáil presence and it has held the Education Ministry for the entire period - one suspects neither will be the case in a few weeks’ time.

There is very little to be said of Fine Gael in all this as Fine Gael has said very little. Of course, they too voted in December against repealing the law allowing religious discrimination in school enrolment. But while the Labour Equality Minister, Aodhán Ó Ríordáin, dutifully walked the plank that night, referring to taxpayer-funded primary schools as “institutions for religious or charitable purposes”, Fine Gael TDs did not even enter the Chamber until the debate was over and it was time to vote.

There is no mention of equal school access in Fine Gael’s manifesto and instead they continue to flog the failed policy of divestment. The party aims to provide 200 additional multi-denominational schools by 2030 so, depending on their age, your children’s children may be accommodated. If the current rate continues we can expect 6 more schools to be divested of Catholic patronage by then.

The Social Democrats, Sinn Féin, People Before Profit and the Green Party all commit in their manifestos to ending religious discrimination in admissions to taxpayer-funded schools. Indeed, some parties aim to tackle the ostracising experienced during the school day by unbaptised children and children of the “wrong” religion.

Excellent parent-led voluntary groups like Education Equality have drawn attention to this problem and one obvious solution is to simply keep faith formation until the last class of the school day, thus facilitating parents in removing their children should they so wish.

Renua, like Fine Gael, make no mention of equal school access and instead focus entirely on divestment. Such a policy usually hides behind the buzzword “choice”.

The problem is that real choice can’t exist without equality. Many parents simply want to choose to send their children to the local school but cannot do so due to discriminatory enrolment policies. Moreover, prioritising choice may actually increase segregation - a school for every religion in the audience. It is simply not possible for the State to meet the religious demands of every parent in the country. Surely the next Government should instead make it its business to work towards an inclusive education system that welcomes diversity.

Paddy Monahan is a campaigner for equal school access

1 UK to close borders to non-English speakers and unskilled workers
2 New Sinn Féin TD apologises for ‘glib, off-the-cuff tweets’
3 A Russian cruiser with ‘cannibal rats’: What other ‘ghost ships’ could be out there?
4 Memo to Sinn Féin: Not ‘Southern State’ or ‘Free State’, the name is Ireland
5 Draining the swamp? Trump in spree of clemency for rich white men
Real news has value SUBSCRIBE