Noel Whelan: Fine prospects for Fine Gael in the byelection

‘Byelections always become effectively bi-polar events. The pro- and anti-government electors quickly rally behind the stronger-looking candidate on each side’ 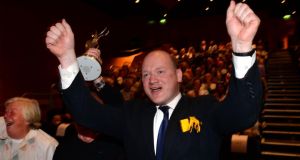 ‘David Fitzgerald (above) is proving to be a strong candidate. Many objective observers who have visited Carlow-Kilkenny in recent weeks speak of his positive disposition which is connecting with voters.’ Above, Fitzgerald, celebrates as it’s announced in Dublin that Kilkenny City is winner of the SuperValu TidyTowns competition, last year. He was there in his capacity as Chairman of the Kilkenny Town Tidy Towns Committee. Photograph: Dara Mac Dónaill / The Irish Times

Any assessment of the potential outcomes for the forthcoming Carlow-Kilkenny byelection has to start with the reality that in the last general election Fine Gael got 40 per cent of the first-preference vote in that constituency and won three of the five seats.

Labour took another of the seats then and indeed the two Government parties combined had a massive 56 per cent of the vote.

Byelections always become effectively bipolar events. The pro- and anti-government electors quickly rally behind the stronger-looking candidate on each side. On the basis of the 2011 results the strongest Government candidate in Carlow-Kilkenny has to have a head start, notwithstanding slippage in support for Fine Gael and Labour nationally since.

The Labour Party candidate in this byelection is Willie Quinn, a county councillor in the Muinebheag electoral area, While Quinn has a reputation locally as a hard worker, the fact that he is based in the smaller of the two counties, as well as the low Labour support relative to other parties in 2011 and the shrinkage since, makes it safe to assume he will not feature in the final shakeout.

The other Government candidate is David Fitzgerald. He was the surprise choice of the local Fine Gael convention in circumstances where it was suggested the party’s headquarters would have preferred former Irish Farmers’ Association president John Bryan as candidate.

However, Fitzgerald is proving a strong candidate.

Many neutral observers who have visited Carlow-Kilkenny in recent weeks have spoken of his positive disposition which is connecting with voters. The mood for Fine Gael in the constituency, as elsewhere, has improved on what it was this time last year during the lead-in to the local elections.

It used to be the case that governments couldn’t win byelections. Opposition parties or Independents won all of the byelections held between 1979 and 2011. However, the current Government has broken that trend.

Labour won the first byelection of this Dáil in October 2011 in Dublin West.

Fine Gael has since won byelections in Meath East and Longford-Westmeath, albeit both in circumstances where the tragic death of a sitting Fine Gael deputy created the vacancy filled in the byelection by a close family relative.

The figures for previous elections and reports from the two counties suggest the only other party in contention in Carlow-Kilkenny is Fianna Fáil.

Indeed, the bookies have long installed its candidate, Bobby Aylward, as the favourite albeit currently with odds only slightly shorter than those offered for the Fine Gael candidate.

Aylward is a former one- term deputy. In 2007 he replaced his brother Liam, who by then had been elected to the European Parliament. Liam had held a Dáil seat in the constituency for 20 years and was a regular poll-topper.

The party won 28 per cent of the vote in Carlow-Kilkenny in 2011 but had been at or about 40 per cent for generations. This, of course, suggests a base on which to build a byelection win.

National polls indicate, however, that the Fianna Fáil vote has improved only slightly since the last election.

The task of the party’s byelection director, Barry Cowen, has not been helped by the traditional rivalry between the Aylwards and the party’s sitting Kilkenny deputy, John McGuinness, or by the latter’s current squabbling with the party leadership

Fianna Fáil’s prospects have also not been helped by the defection four weeks ago of fresh-faced councillor Patrick McKee to become the byelection candidate for Lucinda Creighton’s new party, Renua Ireland. The 26-year-old was impressive in the 2014 local elections in the Kilkenny city west electoral area but this contest is likely to be a warm- up for a more significant Dáil challenge in the next general election.

Sinn Féin’s candidate, Kathleen Funchion, grew the party’s vote to 9.54 per cent in 2011. This was a doubling of its 2007 vote but growing that and getting enough transfers to reach anything approaching the byelection quota of 50 per cent plus one is a big ask.