No room for complacency on youth knife crime in Ireland 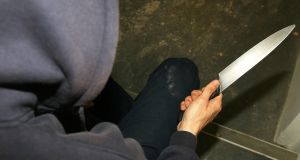 A large proportion of young offenders have been victims of violence and many young people carry knives due to fear and perceived need for protection. Photograph: Katie Collins/PA

Young blood is usually something to be desired but recent events in the UK are giving the term a tragic new meaning as it continues to spill on the streets of our nearest neighbour. The senseless murders of two 17 year olds over the same weekend in early March confirmed beyond doubt that knife crime and youth violence had reached epidemic proportions there.

The number of fatal stabbings in England and Wales last year was the highest since records began and at least 10 teenagers have been killed in 2019 so far. Let me be clear on what is happening in many cases; children are killing each other in one of the most prosperous nations in the world. We shouldn’t take it for granted that it cannot happen here. Knife seizures by gardaí in Ireland have increased by 66 per cent since 2016 and most of these have been taken from young people.

In December 2017, I was asked to be project manager and policy adviser on the Camden Youth Safety Taskforce, which was a 12-month investigation to look at the underlying causes of youth violence and find new ways to combat it in central London. To tackle a problem, we first must understand it.

In certain parts of London, it has become normal to see teenage boys selling drugs on the street

The vast majority of young people involved in serious violence have suffered childhood trauma such as domestic abuse or severe neglect. This has led to many of these young people becoming desensitised and detached from the violent acts they may commit later in life. A large proportion of young offenders have also been recent victims of violence and we know that many young people carry knives due to fear and their perceived need for protection.

The more stabbings there are, the more likely it is that young people will carry knives. This does not provide an excuse but it should give some understanding to help inform effective interventions. It is often the most vulnerable young people who are at the greatest risk and we should shift the question from “why are you doing this?” to “what has happened that is leading you to this?”. This is known as a trauma-informed approach.

Gangs, grooming and the drug trade play a huge role in perpetuating youth violence in the UK. Children as young as 10 are being groomed by gangs using increasingly sophisticated methods to help drive illegal profits for the adults involved. This could start off as something so small as dropping a package off to a nearby address and escalate to a child being driven hundreds of miles from their home to be held in a “safe house” to sell drugs.

In certain parts of London, it has become normal to see teenage boys selling drugs on the street. For some, it is seen as the only way to make money. They say opportunity only knocks once but for many of these children, it never knocked at all.

If children are being recruited by gangs in this country, then how long will it be before we see murders of young people on our streets?

Over here, the Garda recently reported that adolescent children in Dublin are being used by gangs as “spotters” (keeping an eye out for suspicious activity) and “mules” to run supplies. Further research suggests that one in every 10 criminal offences in Ireland is committed by under 18s and gangs rely heavily on the recruitment of children to commit offences and cover their backs.

The question remains as to why Ireland has not had the same shocking levels of knife crime as we have seen across the Irish Sea. Perhaps we’ve just been relatively fortunate so far. Recent reports of gangs of Irish teenagers attacking Deliveroo drivers display a worrying willingness among some young people to commit acts of violence. Research shows the presence of drug markets can drive sudden shifts in violence in local areas. And if children are being recruited by gangs in this country, then how long will it be before we see murders of young people on our streets?

Providing parents with support to strengthen family bonds has been shown to have a positive impact, and equipping young people with life skills to deal with difficult situations

There is no one cause of youth violence and no one solution either, which is why a “public health approach” should be taken. This treats it as a broad public health issue rather than simply a law-and-order matter. It focuses on prevention and involves a wide range of partners working together from schools to the police, community groups to health professionals.

Keeping young people in education, training or employment reduces their vulnerability to getting involved with gangs. Providing parents with support to strengthen family bonds has also been shown to have a positive impact as well as equipping young people with life skills to deal with difficult situations. Youth services, positive role models, trusted relationships, early identification of those at risk, targeting those at the top of the drug trade and providing continuing support for teenagers when they turn 18 are among some of the other ways we can help keep our young people safe. Enforcement action also plays an undeniably important role in any strategy.

The streets of England have seen too much needless bloodshed and loss of young life. Let’s take action now to ensure Ireland never witnesses the same devastation.

Shane Fitzgerald was policy adviser and project manager on Camden’s Youth Safety Taskforce. He was previously a senior adviser in the Policy Research Unit of the UK parliament