No equal right to life if law embraces suicide risk 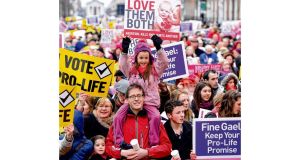 A recent pro-life rally. "The words in the Constitution should be interpreted as the same words would be understood in daily usage." photograph: alan betson

The underlying idea behind putting human rights in the Constitution is to ensure that they cannot be easily reduced just because a (possibly temporary) majority in public or parliamentary opinion wants to do that to meet a popular demand.

This constitutional right to life of a yet unborn child was inserted into the Constitution by the people in a referendum in 1983. In the X case in 1992,the Supreme Court decided, to the surprise of many, that this article could be construed as allowing for the life of an unborn to be ended if the mother was believed to be suicidal.

Following a recent European Court of Human Rights case, the Government is now contemplating introducing a law that would say the life of an unborn child may be ended when there is a threat of suicide by the mother-to-be.

Would a law including a provision allowing a suicide threat to be a basis for ending the life of an unborn child be consistent with the plain words of the Constitution, which require the State to “defend and vindicate” the unborn child’s “equal” right to be allowed to live? I believe the answer to the question is no.

They should not be reinterpreted in some arcane way that can be understood only by a priesthood of constitutional lawyers. If that were to be the standard of interpretation, how could the people be expected to make informed and intelligent decisions in constitutional referendums?

Look at the actual words in the Constitution: article 40.3.3 acknowledges an equal (my emphasis) right to life of a mother and of her unborn child. The sentence would have made have sense even if the word “equal” was not there. It would also have made sense if the sentence had said that “due regard” was to be had to a “superior right to life” of the mother. But that is not the wording of the Constitution.

The word “equal” is there, referring to the right to life of both mother and unborn child, and it was put there with the explicit approval of the people. It would be hypocritical to pretend that the Constitution is not framed as it is, and hypocrisy is not a solid basis for constitutional interpretation.

How ought the words “equal right to life” be interpreted? Many words we use in daily language have ambiguous or various meanings, but the word “equal” has only one meaning. Equal means equal, whether the word “equal” is used by lawyers or by mathematicians.

And, in any normal language, a risk is not equal to a certainty. A risk that someone might unilaterally end their life is not equal to a certainty of the ending of another person’s life by the actions of that person or of another. That, in simple terms, is the difficulty with legislation that says that a threat or an idea of suicide is a ground for ending the life of a constitutionally recognised third party, an unborn child.

A law that took away a right to life of that unborn child before the right in question could be exercised independently could hardly be interpreted as “defending and vindicating” the same right, as the Constitution requires.

Judge Hederman put it this way, in his minority judgment, in the Supreme Court on the X case. “The eighth amendment establishes beyond any dispute that the constitutional guarantee of the vindication and protection of life is not qualified by the condition that the life must be one which has achieved an independent existence after birth.

“The right of life is guaranteed to every life, born or unborn. One cannot make distinctions between individual phases of the unborn life before birth, or between unborn and born.”

The other judges in their X case judgments offered two reasons for not treating the right to life of the unborn child as equal, in practice, to that of its mother, notwithstanding the words of the Constitution.

One was that the mother’s life is to be preferred because she has wider responsibilities. Then chief justice Finlay said that the court must concern itself “with the position of the mother within a family group, with persons on whom she is dependent”.

Essentially he was arguing that once a right is contingent on the behaviour of another person, it does not enjoy the protection of the Constitution. That is a really radical doctrine, which, carried to its conclusion, would undermine almost all human rights law. All lives are “contingent” on the behaviour of others. The life of a baby after birth is certainly “contingent” on the care given to it by its mother and by others.

For these reasons, I would argue that the Oireachtas should interpret the words in the Constitution in their normal meaning, particularly the simple word “equal”.

That should leave them fully free to frame legislation to deal with the C case as decided by the European Court of Human Rights, and with the Savita Halappanavar case, that would be consistent with article 40 of the Constitution. Neither case involved a threat of suicide. They involved medical judgment of objective medical risks.

On the other hand, to introduce a law providing that an expression of a threat of suicide by one person would be sufficient ground for the taking away of the life of another, would not be in accord with the actual words in the Constitution. There would be no “equal” right to life in such a law, and an equal right to life is what the Constitution requires.

If the Oireachtas does not like the way article 40.3.3 of the Constitution is framed it could of course ask the people if they wished to amend it. Personally I would not favour such a change.

But, in the meantime, the Oireachtas should interpret plain language plainly, and forbear from legal sophistry. To do otherwise would be to leave the constitutional protection of the most profound of all human rights, the right to be allowed to live and breathe, resting on sand. It would institute a rule of convenience, at the expense of a rule of rights.

JOHN BRUTON is a former taoiseach

1 Coronavirus: Varadkar returns to practising medicine to help during crisis
2 Restarting Ireland: When and how will we ‘get back to normal’?
3 Genetics shed light on origins of Irish strains of Covid-19
4 Irish doctors on getting Covid-19: ‘In 90 minutes, I deteriorated quite rapidly’
5 Donald Trump’s clown car administration has put the fear in all of us
Real news has value SUBSCRIBE