Nigel Farage: Ireland, if you think Apple is bad you ain’t seen nothing yet 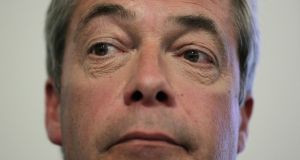 The European Commission’s attack on Irish tax sovereignty using the weapon and subterfuge of state aid rules is deeply harmful to Ireland and a foretaste of more damaging trouble ahead.

The EU has not made public any evidence to back up its claims on the Apple ruling ensuring it is impossible to judge its allegations while the Government is adamant that Apple has fulfilled its tax obligations to Ireland in full. I backed Ireland up on this last week when interviewed on CNN.

Any keen observer of how the EU works will notice the completely arbitrary nature of what it calls its “democracy” and “rule of law”. Treaty law previously forbade financial bailouts, (Lisbon Treaty Article 125) but that did not prevent a bailout for Greece. The Irish people voted No to the Treaties of Nice I and Lisbon I but were told to vote again until they got the “right” answer. The French and Dutch voted against an EU Constitution but they were ignored and the EU carried on regardless, bringing in the Treaty of Lisbon to the same effect.

France and Germany were allowed to break the rules of the Growth and Stability Pact in 2003 eventually contributing to the later euro crisis from which many Irish people suffered.

In this regard the EU is like Lewis Carroll’s character Humpty Dumpty when he says “words mean what I say they mean”.

While EU Treaty law says that the EU has no competence whatsoever on direct taxation, it is clear that the EU is arbitrarily trying to circumvent this by deploying unproven allegations of state aid in order to nobble the Irish corporate tax regime. And seeking retroactive recovery of money from a company just compounds the problem – why would any responsible company invest in the EU when it notices its assets can be seized in an act of political whim. Even Europhiles such as former commissioner Neelie Kroes admit this.

After the EU/ECB unfairly imposed €64 billion Frano-German bank debt on the Irish taxpayer in 2010, and troika officials marched into the Irish Department of Finance most people thought this economic and political disaster was the worst that could happen.

The EU has had its jealous eye on the low Irish corporation rate for many years and is now calling for a Common Consolidated Corporate Tax Base. (CCCTB).

If you think the impact on foreign investment into Ireland has been damaged by the Apple judgment this is a comparatively minor foretaste of what the EU has in store for your country.

In 2012, the European Parliament voted overwhelming for a compulsory corporate tax base (CCCTB) across the EU. The Thyssen report, sets out rules for where and how much corporations pay the tax they owe. The European Commission is now expected to launch its plan for a mandatory CCCTB this year. But even if not mandatory it could still be activated by 9 states through “enhanced co-operation”.

The corporate tax base is the total money that a multinational company pays corporate tax on. The commission will set the rules on where this money goes through an “apportionment formula”. Under the CCCTB, once the company’s tax base is determined, it would then be shared out (apportioned) to all member states in which the company is active on the basis of a fixed apportionment formula. This formula would be based on three factors, assets, labour and sales.

The commission plans to demand companies are required to pay a portion of the corporation tax (a third in the 2011 proposal) they need to pay in the final country where their goods are sold, (ie Spain or France).

Companies with headquarters in Ireland must then give this part of their corporate tax to other EU states, not to the Revenue Commissioners, therefore leading to a severe decrease in Ireland’s corporate tax returns.

By paying a portion of corporate tax at a higher rate in another country these companies would simply ask what is the advantage of being headquartered in Ireland? They may then elect to go elsewhere.

While Ireland can keep a veto on its tax rate of 12.5 per cent – something which attracts and retains a lot of investment in Ireland – the Government would then freely choose whether to live with a smaller corporate tax take or to increase its corporate tax rate to bring in the same level of revenue.

If it decides (with its back pushed against a wall by the EU) to increase its corporate tax rate then Ireland’s competitive advantage in Europe is destroyed, multinational corporations would leave and jobs would be lost – all as a consequence of EU membership.

So if you think the EU’s Apple judgement was bad, you ain’t seen nothing yet.

When the EU destroys your corporate tax regime, you will realise, you are better off out of the EU’s failing political union.