Niall O’Dowd: Irish can be proud of history on racism and slavery in US

There is good and bad when it comes to Irish Americans and racism: here is some of the good 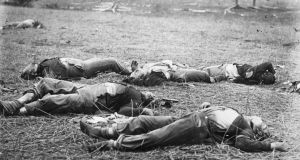 Be wary of historians or writers who paint ethnic stereotypes. In a recent article in The Irish Times Brian Boyd cited events in Irish-American history to argue that the Irish in America were as much oppressors as repressed.

There are two sides to the story and this the other side.

In opposition to the Irish racists cited by Boyd we must count the Kennedys, Eugene McCarthy (who effectively stopped the Vietnam War) and in particular the Irish who fought slavery in the Civil War – so many that Confederate leader Jefferson Davis ordered a secret mission to Ireland to stop immigrants.

Thomas Francis Meagher, founder of the Irish Brigade and the undoubted leader of the civil war Irish in America was a personal friend of Abraham Lincoln and was once called to the president’s sickbed to discuss the war.

When Lincoln declared the Emancipation Proclamation freeing all negroes from slavery, Meagher supported him. He even wrote to the war department to give equal pay. “The Black heroes of the Union army have not only entitled themselves to liberty but to citizenship,” he declared. He swung much of Irish opinion in favour of Lincoln and anti-slavery.

Did he convince all of the Irish? No, not all. Many were plain racist but many felt caught in a fierce vice. Black strikebreakers were brought in when they went on strike in New York docks. They were unable to buy their way out of conscription as the wealthy did at a time when every coach and four brought coffins home from the war. Thus, when conscription was increased they rioted. To their eternal shame they attacked a black orphanage. It should be noted that many Irish tried in vain to stop the riots.

Most of all the Irish hated the fiercely anti-Irish Know Nothings who sprang from the Republican Party, although Lincoln refused to join. Riots against Catholics took place in major cities, in Louisville 22 Catholics were brutally murdered. A priest was tarred and feathered in Boston and churches were burned.

Despite its nativism wing the Republican Party also wanted to end slavery while the Democratic party peopled by the Irish had far more mundane issues such as personal survival in America foremost on their minds.

But many blacks and Irish were actually often very close, both in living proximity and outlook.

As Clarence Page, the African-American Chicago Tribune columnist recently wrote “Irish and African-Americans: Let’s see. Abused? Degraded? Impoverished? Uprooted from shared communal village life? Jammed into overcrowded ships? Jammed into miserable jobs in a strange land? Suffering and dying in mass numbers before the eyes of an indifferent world? Organising for political survival and empowerment in the New World? Oh, yes. African-Americans can relate to all that.”

When racists were warning of the risk of miscegenation the examples they gave were the Irish and African-Americans.

A famous racist pamphlet told Americans that: “Notwithstanding the apparent antagonism which exists between the Irish and negroes on this continent, there are the strongest reasons for believing that the first movement towards [interracial marriages] will take place between these two races.” The pamphlet said that, “Indeed, in very many instances it has already occurred,” and talked about poor “racial hygiene” among the Irish.

In the august figure of Lincoln we see the shifting ground on the issue of the Irish and slavery. Lincoln himself once went armed with an axe handle to a polling booth where Irish brought in from outside were stuffing the ballot box.

But then the war started. “God Bless the Irish Flag.” Lieut James J Birmingham reported Lincoln saying after he raised the edge of it and kissed it during a visit to the Fighting 69th camp. The Irish knew no other foreign leader would dare say that.

He had reason to say it again after the climactic Battle of Gettysburg in July 1863. As Pickett’s Confederate charge threatened to break through the union flank and clear the road to Washington and victory it was the men of the Irish 69th Pennsylvanians who stopped them. As other regiments fled in disarray the Irish stayed firm determined to prove their pride in their new country.

As regards bussing a century later, much of the anger was aimed not at blacks but at white judges and politicians with kids in private schools who were never bussed anywhere but their fathers were forcing working class families to send their kids miles away to bad neighbourhoods as memorably outlined in J Anthony Lucas’s book Common Ground. Racist bastards or concerned parents? There are actually no absolute judgements which makes us as a race in Ireland and America both saints and sinners. That is what objective history teaches, not single issue demonisation.

1 Cork shooting tragedy: Postmortems to be carried out as community shocked by deaths in ‘well liked family’
2 Ciara Kelly: I was pregnant, unmarried, a junior doctor and I got old-school comments
3 Third person arrested in education board corruption investigation
4 The former Rose at the front line of US Covid-19 fight
5 ‘Shellshocked’: Outrage in Australia after women on flight strip-searched in Qatar
Real news has value SUBSCRIBE