Niall O’Dowd: Irish America was first to see the significance of the 1916 Rising 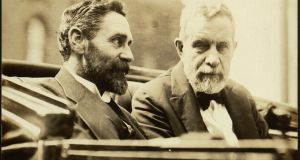 Roger Casement and John Devoy. The Clan Na Gael wrote “the serial and ill informed men who write the editorials have been airing their ignorance this week over ‘riots started by a Sinn Féin mob in Dublin’.”

On August 20th, 1916 Joyce Kilmer, the poet and journalist, interviewed Moira Regan, whom he described as a “slight gray-eyed girl with a charming flavor of County Wexford in her manner and in her voice,” for the New York Times magazine.

Moira Regan was a member of Cumann na mBan and had fought alongside her male comrades in the GPO as well as carrying urgent messages from one Republican outpost to another.

When the fight was over she stood outside the GPO but took one look back at the Tricolour still flying over the building.

Her words capture eloquently what it means to see the birth of a nation.

“You cannot understand the joy of this feeling unless you have lived in a nation whose spirit has been crushed and then suddenly revived. I felt that evening when I saw the Irish flag floating over the Post Office in O’Connell Street that this was a thing worth living and dying for. I was absolutely intoxicated and carried away with joy and pride in knowing I had a nation.”

The revisionists who argue that economic and political relations with Britain were improving before the Rising forget that in 1916 an alien flag flew and a foreign army reigned.

The leaders of 1916 grasped the essential fact that home rule had failed. Even James Joyce, Ireland’s most famous exile, had lots to say about foolishly depending on home rule.

Writing in 1907, Joyce was deeply suspicious of what he satirically called the “Home Rule Comet” – a celestial body he said was sent over the Irish cosmos by the British parliament every few years when home rule fever began to swirl. The comet, Joyce wrote, was “vague, distant but as punctual as ever”, tantalising but never delivering.

There were many others, most notably the Rising leaders, who felt exactly the way that Joyce did about home rule, if not even more strongly. They saw the Curragh Mutiny by British army elite in 1914. They knew of the sedition of Bonar Law, the Tory leader and future prime minister, when he stated in 1912 that he could “imagine no length of resistance to which Ulster can go in which I should not be prepared to support them”.

When would home rule have come? We might still be waiting for it, given the Versailles Treaty, the Great Depression, the Weimar Republic, the second World War, the Cold War – so many crises, so many reasons to abstain from acting. Britain was busy drawing arbitrary border maps all over the Middle East which haunt us to this day.

The historical inflection point for the Irish Americans was not home rule but the American Revolution, which began in 1765 when farmers and peasants took up arms against a far superior army and somehow defeated them.

As is often noted, most Americans started the war as loyalists but ended it as republicans or patriots. Ironically it was Englishman Thomas Paine and his hugely influential pamphlet Common Sense with its rallying cry to fight that convinced many of them. Empires and monarchies were never to be trusted, Paine insisted, and the Great War proved him right. A pity Redmond never took note.

For Irish America, once news of the Easter Rising broke, the great mission was first to get President Woodrow Wilson to speak out, but while the patrician president agreed with them heartily in public, he mercilessly mocked them in private, as Prof Robert Schmuhl’s excellent new book on the Easter Rising, Ireland’s Exiled Children, makes clear.

Short of gaining Wilson’s support, the Irish American leaders wanted to turn back the global tidal wave of condemnation surrounding the Rising.

Significantly, their media sensed the importance of the moment long before more august publications who dismissed it as caused by a rabble-rousing mayhem.

Clan Na Gael leader John Devoy, in many ways the forgotten architect of the Easter Rising, along with Philadelphia-based Irish native John Joe McGarrity, wrote in his Gaelic American newspaper that “the serial and ill-informed men who write the editorials have been airing their ignorance this week over ‘riots started by a Sinn Féin mob in Dublin’.”

The power of the dream

History would prove that judgment to be totally correct, as Devoy, the flinty old Fenian, understood better than most the power of the dream of nationhood and the larger meaning of 1916.

The New York Times, on the other hand, approved of the executions, stating: “War is a stern business and the subject who sets himself against his King . . . can hardly expect mercy.” Except he wasn’t their king. All the major Irish papers backed the executions, so it fell to Devoy and a very few others to put forward the defence of the Rising.

Then there was the Irish role in the American civil war: 250,000 or so Irish fought on the Union side to end slavery and partition and were so effective that Confederate leader Jefferson Davis personally sent an Irish priest and rebel hero Fr John Bannon, to Ireland to try to convince the clergy to stop emigration.

The American civil war neatly dovetailed with the Fenian movement, with Fenian membership a badge of honour in the Union ranks. The Fenian bonds that were sold at the time to be redeemed when Ireland was a nation show an Irish Union army soldier rising from his knees, victorious, as an Irish spéirbhean, or goddess, beckons him to fight once more for Ireland, which shimmers in the distance.

The Irish Americans always believed a fight for Ireland would come again soon – and it did. To Devoy and millions of Irish Americans, the men and women of 1916 were freedom’s sons and daughters as surely as the Americans at Lexington and Concord and the Irish Union soldiers at Gettysburg. They remain the same today. “Gentlemen you have a country,” Thomas Davis said to an earlier generation of insurgents. Not until 1916 did that come true.

Niall O’Dowd is founder of the Irish Voice newspaper, Irish America magazine and IrishCentral.com, based in New York

1 Steve Coogan: ‘Come Out, Ye Black and Tans is two fingers to the British’
2 Anti-Irish bigotry in Britain has not gone away
3 Ryanair’s Michael O’Leary under fire for comments on Muslim men
4 Lithuanian man given until midnight on Saturday to leave Ireland
5 30 great family holiday destinations in Ireland and abroad
Real news has value SUBSCRIBE