Newton Emerson: Tory-hating is the last bastion of Anglophobia 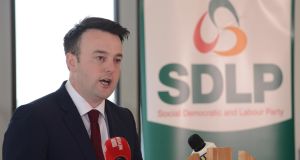 Strictly speaking, there are almost no Tories in Northern Ireland. The Conservative Party consistently polls below 1 per cent. In 2010, when it stood with the Ulster Unionist Party (UUP) on a joint ticket, their combined vote fell 2 per cent.

But by the same token, strictly speaking, most people in Northern Ireland used to be Tories. The Conservative and unionist parties were in effect the same party from partition until the suspension of Stormont in 1972. The UUP stood explicitly as an offshore Tory franchise, even facing a “Northern Ireland Labour Party” opposition, yet it consistently polled about 70 per cent. Did all this Toryness just evaporate, to the point where it can safely be ignored?

The question arises over a statement from new SDLP leader Colum Eastwood. Responding to David Cameron’s financial disclosures, Eastwood demanded – on the basis of apparently no evidence whatsoever – that secretary of state Theresa Villiers “must declare any offshore interest”. The SDLP leader then embarked on what can only be described as a rant against “a cabinet of Tory millionaires” with “no sense of social responsibility” who are fighting a “Tory class war”.

This was terribly ungrateful towards Villiers, who only months ago renewed the special secrecy provision for Northern Ireland party donors at the behest of the SDLP, among others.

It was also terribly familiar, as the phrase “a cabinet of Tory millionaires” was used by Sinn Féin throughout the welfare reform crisis that paralysed Stormont over the past three years.

As nationalists did so much to demand, create and enforce a new politics of mutual respect, they should know what dangers lurk behind a blind spot in the system. Attitudes towards the Conservatives would unquestionably be branded hateful if directed at anyone else. Gentle jokes against the SDLP have been denounced as “racist”, while Sinn Féin considers “anti-Sinn Féin” to be a self-explanatory accusation of prejudice.

I do not believe that nationalists attack Tories as a proxy for unionists, nor is there any evidence that unionists feel attacked. However, I have a strong sense that Tory-hating is the last acceptable face of Anglophobia. The class-war posturing rings untrue – in the phrase “Tory millionaires” it is the “Tory” that is pejorative. Irish millionaires and even billionaires are demonstrably acceptable to Sinn Féin and the SDLP.

East-west relations are one of the three strands of the Belfast Agreement. Intolerance in this relationship is as important to address as in any other. Northern nationalists might say their only problem with the English is that they are governing part of Ireland. However, that is supposedly addressed by the agreement’s devolution and consent mechanisms.

Welfare reform revealed that Westminster only rules Northern Ireland to the extent that it subsidises it – a fact that left-leaning nationalism clearly finds hard to process.

The role of the Conservatives in the Troubles also merits better understanding. Commonly boiled down to Margaret Thatcher killing Bobby Sands, the longer view shows that Labour brought in all the hardline security policies, then the Tories relaxed them. Thatcher introduced the Anglo-Irish Agreement – destroying the unionist-Tory relationship – and her successor, John Major, began the peace process. Thatcher even made an offer to save the hunger strikers, which was spurned by Sinn Féin.

This may be ancient history to the post-ceasefire generation but misperceptions of it have fed into the modern intolerance between left and right. The Scottish independence debate suggests this is mainly a unionist concern, with the UK falling apart over left-Celtic incomprehension that anyone could even be a Conservative. But of course there are small-c conservatives aplenty in Northern Ireland – unionist and nationalist. Opinion polls on economic and social issues show that, far from evaporating, “Toryness” is about 50 per cent.

This inconsistency must be resolved, and the otherwise moderate Eastwood starts from a more reasonable place. If he can find one, he should learn to hug a Tory.