Newton Emerson: Party’s new southern supporters unaware of what they have let over the threshold 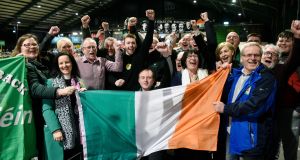 Sinn Féin supporters celebrating after the elections in Dublin. It is easy to see a narrative taking hold in the Republic where rather than Sinn Féin being rewarded for moving away from violence, rivals and critics are seen to be punished for daring to mention it. Photograph: Aidan Crawley/EPA

In an important respect, the Republic now faces a greater challenge incorporating Sinn Féin fully into its political system than Northern Ireland has faced over the past quarter century.

When Sinn Féin’s northern vote began to grow in the early years of the peace process, from its steady 11 per cent during the Troubles to double that today, this was clearly understood as the electorate rewarding progress away from violence and towards political engagement.

That view held up throughout the decade it took to deliver IRA decommissioning, disbandment and the acceptance of policing.

Sinn Féin has continued to equivocate over Quinn’s murder because the party remains beholden to IRA gangs on the Border. The violence and criminality of those gangs spills into the Republic to the present day

Sinn Féin has since sought to present its support at the ballot box as an endorsement of past IRA violence, by portraying the Troubles as a regrettable yet necessary human rights campaign, rather than a failed fight for a united Ireland. Many people appear to have fallen for this, or at least to have found it more comfortable to believe.

However, northern nationalism has never lost its sense of being a moral arbiter of the peace process and of having a duty to address any Sinn Féin backsliding.

The return of Stormont last month followed just such a crack of the whip by nationalist voters.

None of this applies to Sinn Féin’s jump in support in the Republic, which is being interpreted as indifference to IRA violence. Within minutes of the exit poll, party members and supporters were extending that interpretation, claiming if voters were unmoved by the 2007 murder of Paul Quinn then the IRA’s 2,000 Troubles murders must not be an issue either.

There was rage at the media for raising the Quinn case during the election, and gloating that this had not harmed Sinn Féin’s vote and might even have helped it.

It is easy to see a narrative taking hold in the Republic where rather than Sinn Féin being rewarded for moving away from violence, rivals and critics are seen to be punished for daring to mention it.

This position, essentially the opposite of what has evolved in Northern Ireland, might be excusable if it related only to the Troubles, which for most southern voters happened long ago and far away.

However, the Quinn murder happened after the Belfast and St Andrews agreements and the supposed political transformation of the republican movement.

Sinn Féin has continued to equivocate over Quinn’s murder because the party remains beholden to IRA gangs on the Border. The violence and criminality of those gangs spills into the Republic to the present day. Tiptoeing around it has been a major factor in Brexit agreements, over which Sinn Féin may be about to have a government role.

While Brexit is high-level politics, the most insidious aspect of tiptoeing around the IRA seeps into politics and society from below.

The reason Sinn Féin falsely branded Quinn a criminal, as initially did others in authority North and South, is that it allows everyone to conveniently dismiss the murder as “internal housekeeping” – a term coined by former northern secretary Mo Mowlam to ignore paramilitaries killing each other. The concept is readily accepted for violence between gangsters, as people in the Republic are well aware.

People seem less aware of what it might mean to have this concept operating at Irish Cabinet level, or that “internal housekeeping” continues to kill and injure in Northern Ireland. An attempted murder in Belfast last month revealed a senior republican was wandering the city in a bullet-proof vest.

Northern voters have the depth or the excuse to set these hideous compromises off against worse potential outcomes. They live in a divided, damaged society, where a constitutional question hangs menacingly over everything.

Sinn Féin’s new southern supporters, by contrast, have formed a purely transactional relationship with the party. They want change on housing and healthcare, or just somewhere else for the democratic pendulum to swing.

At first sight, this suggests they might be less tolerant of the IRA remaining active and lauded by Sinn Féin.

However, it also means they are less vigilant and informed than their northern counterparts about what they have let over the threshold.

Too late for the Republic

It is probably too late for the Republic to protect itself by launching a law and order crackdown against the Provisional IRA. Large numbers of people might sympathise with Sinn Féin claims of an establishment conspiracy.

The only alternative is the approach pursued in Northern Ireland, where republicans are steered endlessly towards politics, while accepting that politics and the rule of law will be steered slightly out of line as a result.

This is not a doomsday scenario. As Northern Ireland has shown, its most sinister aspect is how easily everyone comes to accept it. That includes coalition partners who depend on Sinn Féin to stay in office. There is no reason to believe that would apply any less in Dublin than in Belfast.

1 Could Ireland put towns under lockdown if coronavirus arrived?
2 Dublin man may have been stabbed to death by woman in parking space row
3 IRFU seek meeting over call to postpone Ireland-Italy match
4 Irish in Italy on coronavirus: ‘The city is in a bit of panic – the streets are empty’
5 Coronavirus: Irish holding back on holiday plans
Real news has value SUBSCRIBE