Newton Emerson: Nobody in NI believes in self-reliance

Both sides have been cheaply bought by those who march them around in circles, 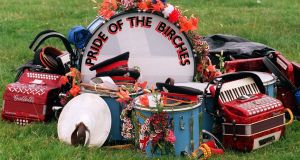 For decades if not centuries before 2011, Northern Ireland’s marching bands – its “largest community arts sector”, to use Givan’s heroic description – managed without any public money. Photograph: Eric Luke

About 100 young people will be affected. The bursary, set up by Sinn Féin former minister Carál Ní Chuilín, was targeted at disadvantaged families.

There was just enough time for this to cause the last Stormont political crisis of 2016. Sinn Féin representatives denounced the cut as bigotry, motivated by a hatred of all things Irish.

Many others, like Alliance leader Naomi Long, compared the tiny saving to the £490 million cost of the Renewable Heat Incentive fiasco. Where opinions differed was on the DUP’s intention. Was it actively seeking to undermine Sinn Féin and the powersharing executive?

It says a lot about the excitable atmosphere around Stormont that such a thing could be suggested.

Givan’s department revealed the cut in an email sent to Gaeltacht colleges last Friday – the final weekday before Christmas. This was clearly an attempt to bury bad news, rather than to rub it in.

Opinion also differed on the Minister himself. Givan was praised last month for a high-profile visit to a GAA club, so does he hate all things Irish or not?

As the row dragged on right up to Christmas, however, one view became conspicuous by its absence. Nobody suggested raising the money from alternative sources.

A clue as to why came from Sophie Long, an election candidate for the loyalist Progressive Unionist Party.

“We can have a society where the Irish language and flute bands are both respected and supported,” she tweeted last Friday evening, adding: “DUP are a shame on unionism.”

The reference to flute bands recalls a £200,000 annual fund set up by DUP former culture minister Nelson McCausland in 2011, suspended by his successor Ní Chuilín in 2015, then reinstated by Givan this July.

For decades if not centuries before 2011, Northern Ireland’s marching bands - its “largest community arts sector”, to use Givan’s heroic description – managed without any public money.

Yet when that funding was cut, they did not suggest replacing it themselves. A small sum was all it took to make them a large football, kicked back and forth between alternating Sinn Féin and DUP Ministers.

Long’s comparison of nationalist and unionist cultural battlegrounds is likely to be rejected by nationalists on the grounds that unionists have no culture – or that what culture they do have is inferior for being supremacist. The best that can be said about this remarkable argument is that it has not won many converts.

One thing both sides undeniably have in common, however, is a fragile belief in self-reliance – even among its most successful proponents.

Earlier this month, GAA commentator Joe Brolly penned an emotional tribute to his home parish of Slaughtneil, where 20 years ago people “decided to create a community strategy covering all aspects of life”, based on “social cohesion and Irish identity”.

Irish-language classes and schools were founded, everyone under 21 is now apparently fluent and all of this was initiated from the ground up.

Where was that spirit last Friday, when all the Gaeilgeoiri were gurning about a little subsidy from Stormont?

It seems that for Northern nationalists, independence from the state is not a goal in itself but just an awkward transition stage, en route to a state reformed enough to pick up the tab. The aim is achieving dependence, despite the example of the Republic, where official support for Irish appears to have done more harm than good.

Unionists will happily toot their flutes to a victimhood tune if it takes them in the same direction.

What actually happens is that everyone ends up marching around in circles, having sterile arguments about who has the better culture while their leaders tell them they are under attack.

A true commitment to self-reliance, as a permanent ideology, might break this cycle. But who would take a stand for that?

Stormont estimates there are 20,000 marching band participants, so it has bought them for £10 a year each. The Gaeltacht bursary worked out at £500 a head.

During the Good Friday Agreement negotiations, SDLP deputy leader Seamus Mallon warned unionists: “If you can be bought, you can be sold.”

Nobody in Northern Ireland cares to heed that warning today.