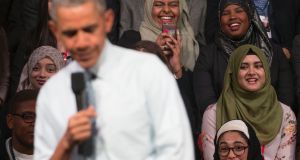 You can see why some nationalists were horrified by US president Barack Obama’s statement in London last Saturday.

At a town hall meeting of 500 UK youth leaders, the first question Obama took was on how the US would continue to help the peace process. The president spoke of “forging a new identity that is about being from Northern Ireland”, as opposed to the “tribal identities” he characterised crassly as “unionist or Sinn Féin”.

This is a controversial argument – and not just because it criticises division north of the Border rather than the Border itself.

Since the 2011 UK census, which suggested a strengthening Northern Ireland identity would compensate for a declining Protestant population, the encouragement of such an identity has been perceived across nationalism as a unionist trap or even a British trick.

All the legal and institutional architecture of the peace process is about respecting two identities, not forging one.

If this is a trick, the Americans seem to be in on it. The London audience was selected from a US embassy youth programme, the questions were submitted beforehand and the president called out questioners by name. Despite his rolled-up shirtsleeves, nothing was spontaneous.

Obama’s remarks were a précis of his speech on his only visit to Northern Ireland, in 2013, when he told another youth audience they lived in a “thoroughly modern Northern Ireland”, which he appeared to refer to as a “country”. Reject fear and end division, he exhorted, then as now.

But there was more time then for Obama to be clear that he sees a united Northern Ireland as the precursor to a united Ireland. His 2013 speech was littered with references to Irishness and the island of Ireland, ending with the words: “This little island, its best days are yet ahead.”

He made no references to Britishness – a glaring omission – while his one mention of the UK was to say it would be better off with a “permanent peace”, unsubtly implying an end to the union.

Yet this also caused nationalist horror, because the example the president gave of ending division was integrated education. He likened Northern Ireland’s school segregation to the racial segregation of the pre-civil rights US.

Northern nationalists see their rise and moral purpose as stemming from the civil rights movement. They also see Catholic schools as the bulwark of their community and identity. To have this turned inside out by the first African American US president was an ideological catastrophe.

Obama was brutally frank on this point. Sinn Féin and the DUP had just launched a policy document that replaced the Belfast Agreement goal of integrated education with “shared education” – which involves two systems making the minimum of civilised engagement to justify segregation forever.

Obama referred to the document but refused to say “shared” or any variation thereof. He then visited an integrated school – his only other public engagement of the trip. If he had heard the plan for “shared schools” with separate entrances, classrooms and uniforms he must have wondered about the drinking fountains.

Nationalists were so upset by the speech that the Northern Ireland Office felt obliged to declare the British government had no agenda against Catholic schools, while the US consulate in Belfast declined to repeat its usual support for integrated education.

Last Saturday, Obama did it again. Integrated education was the example he praised of progress towards a Northern Ireland identity, though many nationalists see that as precisely integration’s problem.

Some of this fear is misplaced ignorance. A common belief that integrated schools do not teach Gaelic games or Irish is wrong and always has been. But nationalists have a point that schools unique to Northern Ireland will inevitably foster a Northern Ireland identity, which challenges those who ultimately do not want Northern Ireland to exist.

It now appears the SDLP has confronted this challenge. New leader Colum Eastwood has taken pains to say he wants Northern Ireland to work. The party’s Assembly manifesto commits it for the first time to integrated education. Obama’s question in London was from the SDLP youth vice-president, who welcomed his answer. A cynic might suspect this was all rather unsubtle as well.

But the majority of Northern nationalists are represented by Sinn Féin, a party that cannot even bring itself to say “Northern Ireland” and whose Minister for Education was found by a judge two years ago to be pursuing “the opposite” of his duty to encourage integrated schools.

It is very much part of the identity of Northern Ireland that by the time moderates agree, it is too late.

3 Mairead McGuinness: They don’t call me ‘Elbows McGuinness’ to my face