After some noxious last-minute compromises, the outcomes are not as transformational as they claim to be. 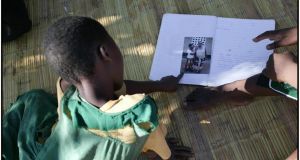 The 2030 Agenda for Sustainable Development: “Leave no-one behind. ”

This weekend in New York, the United Nations’ 193 member states will sign off on a new global development agenda designed to ensure a better and more just future for all the world’s people. The 2030 Agenda for Sustainable Development replaces the Millennium Development Goals (MDGs), a set of eight global objectives agreed back in 2000, which expire this year.

The new framework is far more comprehensive than its predecessor, with 17 goals and related targets tackling everything from ending extreme poverty and hunger to confronting inequality and combating climate change. The announcement that final agreement had been reached on the new agenda on August 2, after three years of debate and consultation, was understandably delivered with an air of triumph and celebration by co-chairs Ireland and Kenya, who guided the final phase of negotiations over a long and rocky road. However, after some noxious last-minute compromises, the outcomes are not as transformative as they claim to be, and it is far from a fait accompli that the resulting agreement will deliver on its promises.

China and the “Group of 77” developing countries have long argued that rich countries should be required to contribute more financial resources to global development than their poorer neighbours. The wealthier states do not agree, however, and their reticence has been much in evidence at the Financing for Development (‘FfD’) talks - a parallel set of negotiations on how resources for global development should be raised and deployed, which has also been unfolding over the past few years. The FfD process came to a head at a recent summit in the Ethiopian capital Addis Ababa, with a deal that fell far short of what was needed. On that occasion, a number of wealthy countries put paid to proposals for an international tax body that might effectively confront crossborder tax evasion - one of the greatest impediments to the development of poorer countries - along with dysfunctional tax competition. And soon afterwards, as the sustainable development talks neared completion at the UN in New York, some industrialized nations sought to further water down the already weak commitments made in Addis.

These were not the only retrograde pressures being brought to bear in the drafting process. Just as richer countries were fighting to avoid more stringent obligations under a new global partnership for development, the African and Arab negotiating blocs raised fierce resistance to the inclusion of language on non-discrimination which they feared could be construed as recognizing the rights of LGBT people around the world. Meanwhile, the desires of most states not to alienate the private sector resulted in the almost-total omission of any language calling for regulation or accountability for private sector abuses.

But despite all this, the new agenda represents a major improvement on the one agreed at the turn of the Millennium. In its breadth and scope it provides a comprehensive consensus vision on what a better world, 15 years from now, should look like. Its universality and determination to “leave no-one behind”, represents a clear declaration of intent that applies in both developed and developing countries. In this sense, it isn’t just a vow to end deprivations in poorer countries; the commitments set out in Agenda 2030 also apply in wealthier countries such as Ireland, not just because of their international responsibilities as donors, but also in view of their domestic obligations to address preventable deprivation and rising inequality at home.

But the true test of whether the new sustainable development goals will deliver where the MDGs fell short lies in their implementation, and it is here that the 2030 Agenda leaves most to be desired. The goals are not legally binding, and although the new framework is explicitly anchored in existing international human rights treaties, and as such offers a declaratory shift away from the outdated charity model of the past to a vision of development based on justice, the provisions for monitoring and review remain vague and voluntary.

The transformative potential of the new development framework is contingent on those in power being held answerable to ordinary people for achieving the goals and targets. This in turn requires effective and democratic systems of monitoring and accountability, at the national, regional and international levels, capable of ensuring governments deliver on the commitments they have made.

Member states have delivered a set of sustainable development goals that is laudable in its scope and ambition, but rich nations’ reluctance to reform the structural injustices of the global economic order, together with a more general reticence to deliver meaningful systems of accountability, may wind up costing the world dearly.

1 Six weeks of Level 5: Non-essential shops to close, no visitors to homes and a 5km travel limit
2 Life under Level 5: What will the next six weeks look like for the State?
3 Much of what we think about Covid-19 is wrong. We need to change the conversation
4 Don’t panic-buy! Don’t panic-buy! How to spend your last hours before lockdown
5 Covid-19: State moves to Level 5 for six weeks with hopes of ‘meaningful’ Christmas celebrations
Real news has value SUBSCRIBE