Michael McDowell: No optimism that coalition will last four years 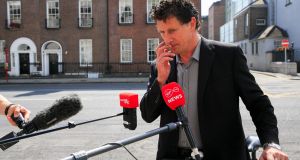 The draft programme for government for Fianna Fáil, Fine Gael, Green coalition is historic in at least one sense. Some 98 years after the National Independence Movement broke apart in a bitter and, I think, wholly unnecessary fratricidal bloodbath on a point of high principle and little consequence, the two political descendants of that rupture are finally forced by the logic of electoral arithmetic to sit together around a cabinet table and to govern Ireland in accordance with their shared values and ideology.

Personally, having engaged in electoral politics and political organisation within Fine Gael and having collaborated politically with Fianna Fáil for many years, I have always thought that this day should come – but I must confess that I always doubted it would.

Like Liverpool and Everton, like Rangers and Celtic, the activists in both parties very frequently defined themselves in terms of not being the other. Each party attempted to be a broad church and inclusive ideologically. Both of them aspired to be centrist. Excluding the other from office often appeared to be their shared raison d’étre.

Their proposed joint venture, in principle, brings me happiness.

Reading the enormously aspirational and often-waffly draft programme for government, I have to confess I have a sinking feeling as to whether the three-party government really will deliver on all of its commitments. The problem with the vast array of policy promises and positions is that it will hand the opposition, now to be dominated by Sinn Féin, vast quantities of bricks and stones to be thrown in the direction of the government benches and their complement of sullen backbenchers.

While some may think there is an element of equity in sharing the position of taoiseach for two two-year terms (and I understand why that is being proposed), I have to express my doubts as to the wisdom of such an arrangement.

The permanent government, our Civil Service, has an entirely different view of ministers who have a two-year sell-by label stitched into their political collar than of a minister who intends remaining in position for five years and is likely to do so.

My experience of the requirements of departmental management, legislative programmes and implementation of policy objectives tells me that a two-year term will be a poisoned chalice for some, at least, of the ministers about to be appointed if and when each of the political parties approves the coalition deal.

This issue is magnified in the case of a rotating taoiseach or ministers placed in charge of one of the central core departments of our administration. Presumably the Green Party intends on this occasion not to repeat the farcical antic of rotating its own ministers half-way through its projected term of office. The last time they were in office such a ministerial rotation commitment blew up in their faces and the beneficiaries were, surprise surprise, Eamon Ryan and John Gormley who simply carried on for their full term (or nearly all of it).

The programme is a loosely stitched patchwork quilt of green political aims.

But, even so, there are problems. It’s all very well in 2020 saying that you will legislate now to ban the registration of all internal-combustion-powered cars in 2030. This commitment, already given by Fine Gael in its environmental programme issued by Richard Bruton, cannot be delivered by this government except on paper. And the truth is that our capacity to fulfil this commitment largely depends on what Britain, which shares the right-hand drive with us, and the other EU countries achieve. It also depends on building, some eight or 10 years from now, infrastructure to sustain such transport.

Banning fur farms in two years’ time means that the mink coat brigade will either have to go without or go abroad to satisfy their lavish lifestyle.

More seriously, the commitment to ban all new exploration of gas in Irish waters is, frankly, daft. Ireland will be dependent on gas as a back-up fuel for the next 30 years on current projections, even if a massive programme of renewable energy is implemented over the next decade.

Having drawn the readers’ attention last week to Theodore Roosevelt’s comparison of the “man in the arena” with critics, I don’t wish to appear churlish or negative about those now embarking, should their parties allow them, on four very difficult years of economic governance.

But I simply don’t have a sense of confidence or optimism that this government will last four years. It seems to me that shouldering the unpleasant responsibilities of office with unemployment, a hugely weakened exchequer and volatile and depressed international economic weather is a very burdensome commitment. It also seems to me that backbenchers who fear for their seats may have every reason for their anxiety in 12 months’ time.

I wish the parties well – for all of our sakes. But this programme for government, long on ambition and short on reality, doesn’t seem to me to be the pre-nup for a happy and enduring marriage.