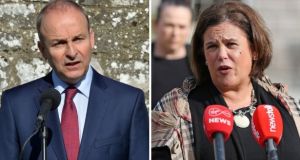 A recurring theme in the Covid crisis is that it will radically transform society both culturally and economically. Left-wing thinkers look to the pandemic as having a catalysing effect on the long-awaited demise of global capitalism and its domestic out-workings.

In 1914 some of the Kaiser’s ministers predicted that a German win in the Great War would, nonetheless, bring about internal political radicalisation in Germany itself. While the pandemic is not directly comparable to a third world war, it would be foolish to discount its radicalising potential.

The very fact that Ireland is running massive exchequer deficits to minimise the economic consequences of Covid for employees and enterprise may have lasting potential for left-wing politics. No one is arguing for austerity and very few are championing major tax rises to pay back the increased indebtedness that we are incurring over the last year and, quite likely, for a further six months.

It is reasonable to assume that there will be a bounce back in economic activity as lockdown is gradually dismantled. But a lot of enterprises now dependent on the economic equivalent of ventilators may not survive their admission to the Intensive Care Unit.

Taking out the political crystal ball, it is difficult to predict exact consequences for each of our political parties. Murmurings among Fianna Fáil grassroots this week against Micheál Martin were predictable, but are they significant? If the party’s poll support is truly of the order of 14 per cent to 18 per cent, its members have much to worry about. It is hard to gauge the impact on Fianna Fáil’s electoral fortunes of an “openess” to coalition with Sinn Féin. But on these figures FF would be the minority mudguard in any SF-led government. That bodes ill for the party.

Martin has no choice but to declare his intention of leading the party into the next general election. Any other indication would immediately transform him into a lame duck Taoiseach. But the crucial question is as to whether his parliamentary colleagues will want to replace him as party leader as soon as his term as Taoiseach comes to an end. It is by no means clear whether any of the four or five alternative leaders could use the then-remaining two years of the projected life of this Government to recover the party’s poll position. If, as seems to be the case, every alternative leader is open to Sinn Féin coalition, the real problem will lie in convincing the electorate that FF is not a mere political mudguard-in-waiting for a coalition led by Mary Lou McDonald.

Apart from Sinn Féin, other parties of the broad left – the Greens, Labour, Social Democrats and People Before Profit (by whatever label they are described in two years’ time) – might each aspire to modest growth if there is a general swing to the left.

While we know that Solidarity-People Before Profit is in substance a Leninist Trotskyist Marxist party which, while curiously condemning Sinn Féin as a “pro-capitalist, sectarian” party, seeks to hide its true complexion from voters, it isn’t clear whether there is a whisker of difference between Labour and the Social Democrats, or between Labour, the Social Democrats and the Greens in terms of broad ideological outlook.

Fine Gael, for its part, is receiving about 30 per cent of opinion poll support largely as a “none of the above” party. While Leo Varadkar has abandoned trumpeting his posture on behalf of “the people who get up early in the morning”, its role in implementing massive Covid exchequer borrowing and the exhaustion of low-hanging political fruit on the branches of the liberal agenda may leave the party politically marooned without any viable coalition partners in the next general election – especially if FF has taken to speed-dating SF so as to dispel any hint of a renewed “confidence and supply” arrangement with FG.

What about Varadkar’s Fine Gael?

Perhaps Varadkar believes that he can cannibalise despairing FF support once the prospect of an FF-led government disappears. Certainly, he is showing no great empathy for his present Coalition partners in their struggles with Covid.

But one way or the other, the bottom line for Fine Gael is whether they can emerge from this Government with any real prospect of heading the next government.

Back in 1985, the Progressive Democrats emerged as an alternative to the unpalatable choice of a Haughey-led Fianna Fáil majority or a second term for an unpopular FitzGerald-Spring led coalition.

Politics like groundwater tends to find its own level. There may be among some of the more ambitious and politically circumspect Independents a dawning understanding that they will be marginalised unless they group together to offer middle Ireland a credible electoral vehicle as an alternative to picking and choosing between the remnants of the present Coalition. It could yet happen.