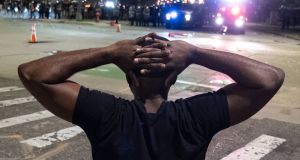 A protester in front of a formation of Detroit riot police in the wake of the killing of George Floyd by a white officer. Photograph: Seth Herald/AFP)

In July, 2017, Donald Trump, newly elected president of the United States, organised a rally of uniformed police officers on Long Island in New York state. His audience were ranged in front of him and a number were seated behind him as he spoke. This was a classical visual format to suggest to television audiences that his uniformed audience were, in effect, supportive of him and his remarks.

Boris Johnson, by the way, unsuccessfully tried a similarly crass visual stunt in the course of the run-up to his 2019 election campaign, addressing police in West Yorkshire – having kept his uniformed trainee police officer audience waiting an hour. It backfired for Johnson.

1 Many people identified as close contacts refusing to come forward for Covid-19 testing
2 David McWilliams: ‘Ireland is three decisions away from being a perfect country’
3 Two in custody after Ryanair flight to Dublin forced to divert
4 My aunt never told us that Gran passed away with no will
5 A US food writer moved to Ireland. Here’s what he found
6 Gardaí found naked man on crucifix being whipped in Dublin club, court told
7 Leo Varadkar says Barry Cowen has more questions to answer
8 Game Changers: Gary O’Toole took a stand when others turned their heads
9 Mandatory quarantine and flight cancellations unlikely despite rise in cases
10 Gerry Thornley: Munster will make for interesting case study when rugby resumes
11 Green Party TD queries ‘usefulness’ of another appeal in €13bn Apple tax case
12 Fintan O’Toole: Jack Charlton allowed us to accept the English part of our Irishness
13 Marian Keyes: ‘I thought when I stopped drinking my life was over. It was just beginning’
14 Random coronavirus testing for people entering Ireland under consideration, says Varadkar
15 Government to push through €2bn credit guarantee scheme next week
16 Covid-19 laces granting of Irish citizenship with danger
17 Naya Rivera: Glee actor’s body found in lake, authorities say
18 The $6bn judgment pitting Nigeria against Irish businessmen
19 California shuts down again as US coronavirus cases surge
20 If it’s safe to do so, could this be the time to spend for Ireland?
21 ‘Mother Mooney’, the Mayo woman who campaigned for justice for her wronged son
22 McKinsey warned Wirecard a year ago to take ‘immediate action’ on controls
23 US passengers fly into Dublin: ‘I’m here for six days. I guess I’ll have to stay inside’
24 Iftas: Normal People arrives too late for ‘virtual’ awards
25 Warnings over theft and scams after fourfold rise in puppy prices
26 Brussels plans attack on low-tax member states
27 Covid-19: 200 to 250 people arriving in Ireland from US daily - Coveney
28 50 best Irish albums of all time – in order
29 How safe are beauty treatments? A spa session reveals a new world
30 Cowen under pressure to answer further questions on gardaí encounter
31 Costs and borrowing rules locking a generation out of home ownership, builder warns
32 Covid anxiety among domestic holidaymakers could sink this summer
33 Coronavirus: Parents of new babies to get three extra weeks’ leave
34 Georgia and Fiji in line to join Six Nations sides in eight-team tournament
35 Roger Wilson tackling the problem of bad technique in Texas high school football
36 My daughter won’t go out to meet friends after lockdown
37 Majority of employees don’t want to return to pre-Covid working patterns
38 Thandie Newton names names. Will Hollywood punish her?
39 Back with our old friends at eir – and nothing seems to have changed
40 More than 10,000 charities registered in Ireland last year
Real news has value SUBSCRIBE