Mary Lou Quinlan: Why it matters that Clinton is a woman

I keep hearing this drumbeat from men and women: “Oh, I’d like a woman to be president . . . but just not this woman.” 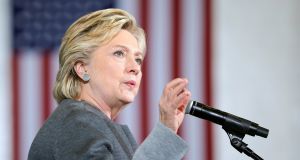 Hillary Clinton: she “has never lost the compassion that is part of her DNA as a woman, mother and grandmother”. Photograph: Brian Snyder/Reuters

American voters are less than a month away from the end of the most bizarre political slugfest any of us can remember. In the red Republican corner is a candy-haired, spray-tanned, real estate tycoon whose primary global experience is owning the Miss Universe pageant and a few brass-plated hotels. In the blue Democrat corner is a former first lady, US senator, secretary of state and attorney who has been a lifelong advocate for women and children.

Hillary Clinton should be a unanimous decision. She is the most qualified candidate in history to run for president. You would also think that the United States would be proud to elect a woman to the top office in the land.

Yet the presidential election is still a nailbiter. Last week ended with a bombshell, a recording of Republican candidate Donald Trump spewing lewd comments about women. Within an hour, a former US congresswoman who supports Trump passed it off as “bad boy talk”. With just a few weeks to go, Hillary should be doing a victory lap. But then there’s that “woman thing”.

I keep hearing this drumbeat from men and women: “Oh, I’d like a woman to be president . . . but just not this woman.”

It reminds me of the lines I heard as I climbed the rungs of corporate America during my successful 40-year business career: “We want women at the top but there just aren’t enough in the pipeline” and “We don’t want to promote a woman just because she’s a woman. What good would that do?” It would do a lot of good.

I was lucky to grow up with a mother who worked outside the home in the 1950s and 1960s and who instilled in me the belief that succeeding at my chosen profession would be a worthy use of my energy and talents.

Mom was such a career cheerleader that she didn’t hang my graduation or wedding photo on her bedroom wall. She hung my corporate headshot: me in a black suit with hands folded in that “I’m the chief executive but a nice person” pose. She even lit a votive under it. In my house, a woman at the top was not the exception, it was the expectation. So why not in the White House?

I saw it again and again in corporate life where women were never “something enough” (fill in the blank with “commanding/decisive/strong”). Or there was its corollary: we were “too pushy/ agreeable/shrill”. And these prejudices come into play when that woman suddenly becomes the boss.

I often speak to large audiences of women about leadership. Invariably, at the closing question-and-answer session, a woman will stand up and say, “I’d rather work for a man than a woman”, and then egg on the crowd with an incident where a female boss failed her. That’s when I call her out: “Every time you say that, you are hurting the chances of every single woman here to ever become a boss, including yourself.”

Why are people so much harder on women than on men? As Marlo Thomas famously said: “A man has to be Joe McCarthy to be called ruthless. All a woman has to do is put you on hold.”

Many will stick by a quite imperfect man who brags that he is smart not to pay taxes and who insults minorities, degrades women, mocks the disabled and disrespects parents of war heroes. They laugh at Trump’s profanities while they scrutinise Clinton’s “cackle”. They cheer him as he chomps greasy burgers while they blame her for stumbling with pneumonia at a 9/11 memorial event. They wink at his three marriages to younger models while judging her for staying with Bill through his infidelities.

Hillary Clinton has weathered world crises, forged bonds of peace in a world gone mad and proven she can withstand the fishbowl existence of the loneliest job on earth. Yet she has never lost the compassion that is part of her DNA as a woman, a mother and a grandmother who is devoted to human rights and who is ready to start mending a divided nation.

I watched my own mother raise a family, negotiate at the office, persist despite blood cancer and still find time to care for others, inserting her concerns into her personal “God box” of prayers: “We’re stronger than we look.” Can we reframe “strength” through a female lens, as listening, collaboration, a steady hand on the tiller?

Those of us who want a level playing field for the women in our lives might ask: “What ‘right’ woman are you waiting for?” She’s right here, right now.

Mary Lou Quinlan, author, actor and founder of Just Ask a Woman, is performing her one-woman play The God Box: A Daughter’s Story in nine venues in Ireland from October 13th-30th to raise funds for local hospices through the Irish Hospice Foundation. See www.theGodBoxProject/events for details

1 Caroline Flack death: Public disquiet over media conduct grows
2 Storm Dennis washes abandoned ‘ghost ship’ onto rocks off Co Cork
3 Dancing with the Stars has hit Father Ted levels of farce
4 Storm Dennis: Thousands without power as wind warning issued
5 Life as a female TD: ‘If I had a euro for every time I’ve been called the C word’
Real news has value SUBSCRIBE