We need more passionate contributions, like those of Pat Carey and Seán Fleming 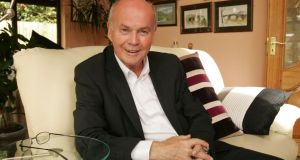 ‘The media coverage surrounding Pat Carey arose because he had expressed reservations about Fianna Fáil’s state of readiness for the forthcoming marriage equality campaign. By going public with his own story he has made a significant and timely intervention into that national debate.’ Photograph: Alan Betson

It was fascinating this week to hear two of Fianna Fáil’s most mild-mannered men provoked to emotional engagement in the debate around family, relationships and marriage equality that is currently prominent in our politics.

First came former minister Pat Carey, who, in a series of interviews, discussed his being gay. It was poignant to listen to him reveal that he was in his mid-60s before he felt comfortable acknowledging his sexual orientation, even privately. He has given all of his life to public service, as a teacher and community activist in Finglas, as a councillor and then as a TD and minister. He no doubt would have wished it otherwise at the time but it now seems clear that he was fortunate to lose his Dáil seat in 2011. It gave him the time and space to reflect on his life, to find love and to get to a position where he could speak to close friends and family about being gay.

Carey’s story underlines the extent to which many gay men and lesbian women have been made to fell uncomfortable in and excluded from our society. The media coverage surrounding Carey arose because he had expressed reservations about Fianna Fáil’s state of readiness for the marriage equality campaign. By going public with his own story, he has made a significant and timely intervention into that national debate.

The other significant intervention occurred during the course of Claire Byrne’s radio show on Saturday. Among those in studio was Bishop of Elphin Kevin Doran and Ben Conroy from the Iona Institute. Also on the panel was Seán Fleming, the Fianna Fáil spokesman on public expenditure.

Fleming was a bit out of his political comfort zone: listeners are more used to hearing him speak on financial and economics matters rather than issues such as the Children and Family Relationship Bill, which was the topic of the week.

At one juncture in what was at times a noisy discussion, Byrne asked Bishop Doran to articulate the nature of the substantial objection to the proposed legislation. The church view, he replied, is that it is preferable for a child to be brought up by a couple composed of a man and woman and that there should be a legally provided for preference for such parenting in our laws, including our adoption laws.

He went on to wonder aloud how two male parents could respond to the human, personal and feminine needs of a 14- or 15-year-old daughter. It is a remark I suspect caused offence to every father of daughters in the land.

However, more immediate offence was taken in studio to the bishop’s suggestion of a legal preference for children to be reared by two parents of different genders, a scenario Conroy had earlier in the programme described as “ideal”.

The strongest reaction to what the bishop had to say came from Fleming, who is not a man who is easily riled. Fleming told of how he had been reared by his mother on her own because his father had died when he was young and he was concerned by the suggestion that his family situation was therefore somehow less than ideal. He was particularly angered by the implication that his widowed mother should somehow be legally classified as second-class citizen to a couple in terms of her capacity to adopt.

It was a passionate intervention of the type that we need more of in the current debate. It is the personal stories that best illustrate the complexity of Irish family life.

The electorate won’t engage with discourse that merely involves competing spokespersons quoting or misquoting from their preferred international studies on the supposed impact on children of being reared in different types of households.

We don’t need that. Each of us has only to consider our own extended families or neighbourhoods. The full diversity of family formation and parenting is all around us.

In most households children are reared by two parents of different genders but a third of Irish households are organised differently.

In most households children are conceived naturally but there are also many children born through assisted human reproduction and the overwhelming majority of those are born to couples of mixed gender.

We also know from our life experience that good parenting is not determined by the age, number, gender or orientation of a child’s parent but rather by the capacity of those doing the parenting to love and care for children.

1 Covid-19: Government set to reject advice and approve reopening of gastropubs and restaurants
2 Miriam O’Callaghan’s ‘forever sorry’ apology puts her usual touchy-feeliness in the shade
3 Miriam Lord: Helen McEntee holds up well for someone with barely a leg to stand on
4 New direct ferry to Dunkirk will be valuable entry point for lorries to Europe after Brexit
5 Anti-alcohol zeal of public health experts peppers reopening debate
Real news has value SUBSCRIBE