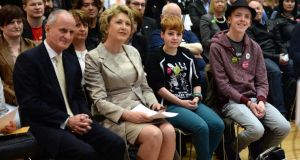 ‘Slowly, but surely, we have been chipping away at what former President Mary McAleese succinctly describes as “the architecture of homophobia”.’ Mary McAleese, who was speaking at a Belong To Yes event, with Dr Martin McAleese, Ciara Sheehan and Nathan Beatty, (right). Photograph: Dara Mac Dónaill / The Irish Times

Last weekend will go down in Irish history. We did far more than just extend marriage to same sex couples – we changed forever what it means to grow up lesbian, gay, bisexual and transgender (LGBT) in Ireland. We helped shape a fairer and more equal Ireland for this generation and future generations of children and young people.

A quiet revolution underpins the weekend’s historic victory for LGBT rights. This revolution has gone on among Ireland’s young people, with tens of thousands having the confidence to come out all across the country.

It has been far from easy for them but they did not leave home, they stayed put and their voices changed their communities, culminating in this marriage equality referendum victory. Those teenagers who have been coming out for over a decade – together with their friends and families – are now today’s voters and have secured marriage equality for us all.

This has change has been occurring since 2003, when BeLonG To (the national organisation for LGBT young people aged between 14 and 23 years) was established. At that time, young people’s sexuality and gender identity were taboo issues. It was widely believed that, even among other youth organisations, young people could not become LGBT until they became adults.

At first we couldn’t meet politicians and the existence of homophobia and resulting poor mental health among LGBT young people was categorically denied. The organisation was formed precisely because we – a group of youth workers – became acutely aware that existing services were not adequately equipped to support LGBT children and young people struggling with homophobic bullying.

In the last 12 years, we’ve come a long way. The Department of Education and the Catholic Management Body endorses BeLonG To’s Stand Up LGBT Awareness campaign in all secondary schools in Ireland and we’re one of the only countries in the world to have an LGBT school curriculum in place. The National Strategy for Suicide Prevention and National Action Plan on Bullying now also accepts that homophobia leads to suicidal behaviour.

Slowly, but surely, we have been chipping away at what former President Mary McAleese succinctly describes as “the architecture of homophobia”. And so from supporting 52 people in our first year of opening, BeLonG To has since been able to help over 4,000 LGBT young people and their families each year in 20 locations across Ireland – the same small towns and villages that voted Yes on May 22nd.

It has taken years for us to deliver this step change in policy and even longer to win the hearts and minds of parents, teachers, families, the media and young people themselves. Attitudinal change takes time and it is notoriously difficult to measure, but I believe a shift has taken place over these years, resulting in a deep understanding across Ireland that, once LGBT young people (just like their peers) are safe and supported by their families, communities and schools, they thrive.

But we are in no way out of the woods. It is still tough growing up LGBT in Ireland, as exemplified to our youth workers during this campaign. They have seen a tenfold increase in the number of first time service users, owing to negative and disturbing comments they have been forced to hear during the marriage equality debate by the No camp. Coupled with the fact that 50 per cent of LGBT young people still consider suicide owing to stigma and homophobic bullying and one in five LGBT pupils avoid school, we are far from where we need to be.

However, in tapping into this quiet revolution, underway in our towns and villages, the marriage equality referendum has showcased the best of what it means to be Irish – to have open, kind hearts, a generosity of spirit and a great capacity to love. It has led the way and opened the door to a more progressive Ireland.

On Sunday, I spent time with LGBT young people at BeLonG To offices and I asked what we need to change next. Filled with hope and excitement for the future, they now want inclusive gender recognition legislation for transgender young people. So that will be BeLonG To’s next fight. That and social justice for all young people.