‘Why did the atheist go to Mass?’ 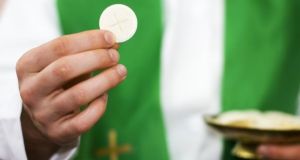 Sir, – The article “Why did the atheist go to Mass?”, by Joe Humphreys, (Life, Online, December 10th) should be required reading for all those who are engaged with the process of seeking to understand faith in a changing world. However, to equate the “One, Holy, Catholic and Apostolic Church” with the administrative location of a worldwide institution is to miss the very expression of that catholicity in the day-to-day lives of the parishes which, as struggling communities of faith, witness to the person of Christ present in the “people of God”.

Apart from this, his exploration of the meaning of ritual combined with his call to “question underlying assumptions we have about religious practice” serve to thoughtfully engage one in reflection on the advent season in concrete and accessible ways. – Yours, etc,

Sir, – There is a long-standing theological understanding of Mass, and its ritual language has carefully been honed over centuries, but your house philosopher Joe Humphreys has attempted something unusual and insightful.

He has applied the findings of philosophy, psychology and cultural anthropology in an effort to explain the benefits that atheists and believers might derive from attending Mass occasionally.

Rituals with solemn verbal utterances in all cultures indeed have their social-psychological functions. The insights of Ruth Benedict, Franz Boas or Claude Lévi-Strauss – even less so their names – rarely feature in the pages of Irish newspapers, so it is refreshing to see Joe Humphreys fearlessly visiting such territory, and in accessible language.

Perhaps he might offer commentary on the recent willingness of thousands of French citizens to endure icy temperatures so that they could pay tribute to deceased rock star Johnny Hallyday as his funeral cortege proceeded, escorted by Harley-Davidson motorbikers, along the Champs-Élysées to the Madeleine church where President Emmanuel Macron delivered a short secular eulogy on the steps of the symbolical Greek temple facade before the coffin was received by priests into the church interior for a funeral Mass.

It was a perfect tête-à-tête between France laïque and France catholique, even if Hallyday was no Voltaire.

The sacred and the secular have their separate spaces, but in the human psyche and the public domain, they experience their solemn moments of intersection. – Yours, etc,

Sir, – I share Joe Humphreys’s experience of Mass attendance; for example, offering each other the sign of peace and the confession of sins (making time and place to admit responsibility for personal wrongdoings) among the other issues which he articulates. However, alluding to the Catholic Creed he incorrectly states a vow to the “one, holy, Catholic and Apostolic Church”.

The actual words of the Nicene Creed are in lower case and with no prefixed definite article – thus, “to one, holy, catholic and apostolic Church”. It is therefore not referring to the Catholic Church but to a universal church (from the Greek katholikos). This is both a reflection on the original church and an aspiration for greater unity. – Yours, etc,

Sir, — Joe Humphreys made the extraordinary claim that transubstantiation (the belief that the bread and wine in the mass become the body and blood of Christ) is “a cornerstone of faith over which millions of people were killed during religious wars down the centuries”.

Thankfully he avoided another common atheist myth that blames religion for most of the wars in history. In reality, while in my book even one war over religion is one too many, less than 7 per cent of all wars fought in history had any significant religious component.

Half of all religious wars were wars of conquest fought on behalf of Islam. Other religious conflicts have included the Crusades, and wars where Protestants and Catholics refused to tolerate each other’s beliefs on such issues as justification by faith and papal authority.

But millions of people killed over the issue of transubstantiation? Perhaps in some parallel universe – but not in this one.

Perhaps the lesson is that atheists are as prone to create myths as the religions they reject. – Yours, etc,

1 Conor McGregor stops Donald Cerrone in 40 seconds on UFC return
2 Harry and Meghan will no longer be working members of British royal family
3 Netflix: The best 101 films to watch right now
4 Mary Lou has to call for the smelling salts as SF councillor deals a knock-out blow
5 ‘He was some man’: Shane’s journey from care child to fearless activist
Real news has value SUBSCRIBE