‘Russian state guilty of attempted murder in a British city’ 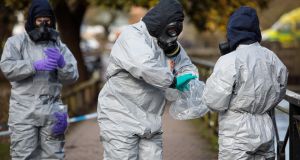 Police officers in protective suits and masks work near the scene where Sergei Skripal and his daughter Yulia were discovered after being attacked with a nerve agent in Salisbury. Photograph: Jack Taylor/Getty Images

Sir, – On a quiet Sunday in one of Britain’s most beautiful cathedral cities, a father and daughter were struck down by the first offensive use of a nerve agent in Europe since the second World War.

Sergei and Yulia Skripal lie stricken in hospital. A police officer who went to their aid was left in a critical condition. A total of 35 people had to seek medical treatment simply because they were nearby when the nerve agent was released.

What happened in Salisbury on March 4th was a brazen attempt to murder civilians on British soil, endangering anyone – of any nationality – who happened to be nearby. If this could happen in Salisbury, the blunt truth is that it could happen anywhere.

Our scientists have identified the substance used against Sergei and Yulia Skripal as a Russian military-grade nerve agent known as “Novichok”. Only Russia combines a record of state-sponsored assassination with an avowed motive for targeting Sergei Skripal – and a history of producing “Novichok” agents.

After the attack, the British government gave the Kremlin an opportunity to explain if any “Novichok” nerve agent had gone missing.

But this request was ignored, leaving the government with no choice other than to conclude that the Russian state was guilty of attempted murder in a British city, using a lethal nerve agent.

The incident in Salisbury is part of a pattern of the Kremlin’s lawless behaviour. Since 2014, Russia has annexed Crimea, fanned the flames of conflict in eastern Ukraine, hacked the German Bundestag and the Danish government, and interfered in European elections.

Now the Russian state has used a lethal, banned nerve agent on European soil. That more people are not in hospital in Salisbury is only down to luck. The perpetrators obviously did not care how many innocents they endangered.

Britain has responded by expelling 23 undeclared intelligence officers from the Russian embassy in London. The international community now needs to stand together to uphold the rules on which the safety of all our citizens depend. If we do not, the Russian state will continue its dangerous and destructive behaviour.

I want to be clear: our quarrel is not with the Russian people, whose cultural, scientific and literary achievements shine down the centuries. Nor will we forget the sacrifice and fortitude shown by the Russian people during the second World War.

Those of us who prize the values of liberal democracy and the rule of law share an obligation to oppose the Kremlin’s ambition to divide and weaken the international community.

Our response has been robust while remaining true to our values.

Many Russians have made Britain their home. They abide by our laws and make an important contribution to our society, and they are welcome.

But every time the Russian state breaks the international rules and remains unchallenged, it becomes even more of a threat. This latest outrage took place in a peaceful city in Britain. I hope it never happens anywhere else, least of all here in Ireland. – Yours, etc,