Lebanon struggles to shelter and feed over a million Syrian refugees

Failure to meet UN’s appeal for $7.4 billion to deal with the fallout from the Syria conflict has far-reaching consequences 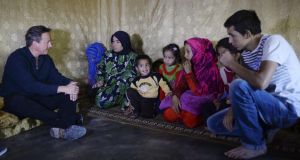 The sandstorm that hit Lebanon recently smothered Beirut in swathes of choking red dust. Scarves covered people’s noses and mouths. With the air hazy and dulled, and temperatures soaring into the late 30s, it was like viewing the world through a sepia lens.

Lebanon is subject to the vagaries of the seasons in a manner Irish people rarely experience.

I was last here in 2013, during a winter so bitterly cold that it cut to the bone in a way I will never forget. At that time, there were nearly 800,000 Syrian refugees here enduring the harshest of seasonal conditions. In the interim, the situation has deteriorated drastically. Almost 1.2 million displaced people – nearly one third of Lebanon’s entire population – are taking refuge here from the horrendous conflict in their home country.

This is buckling the resources of a country smaller than Munster.

And yet, despite its tiny size, Lebanon has offered safety, shelter and solidarity to so many of its Syrian neighbours who were bombed, attacked and uprooted from their homes.

Contrast that with the fact that earlier this year, the UN launched its largest ever humanitarian appeal – for $7.4 billion – to deal with the fallout from the Syria conflict and that appeal remains chronically underfunded, with a current shortfall of $4.7 billion as we enter the last quarter of the year.

The consequences of such chronic underfunding on a scale of this magnitude for a UN appeal are tangible. These aren’t numbers conjured out of this air. They translate into failure to deliver basic humanitarian services and the kind of desperation that drives families to take extreme measures.

Only last December the United Nations World Food Programme announced it has been forced to suspend a critical programme providing food vouchers to more than 1.7 million Syrian refugees in neighbouring countries, due to a funding shortage.

Global funding for effective international humanitarian responses is at a critical juncture and must be addressed with great urgency.

Organisations such as Concern Worldwide can help to meet some of the humanitarian needs on the ground, but ultimately that will not solve the problem.

For as long as the Syrian war continues, the plight of the millions of refugees will go on, and their number will increase. The situation will only stabilise and rescind when there is peace; we desperately need an international political solution.

Because this always comes back to real people.

I have met so many Syrian families this week, all of them with heart-rending stories of death and destruction. Mothers who jump at loud noises, remembering the crash of bombs. Children who have grotesque nightmares and need close comfort at night. Fathers who feel ashamed that they cannot provide for their families.

They cannot go home; they are stuck, reliant on the kindness and assistance of others, not knowing when this will all end.

I talked to many Syrians, many of them fearful of giving their names, many unregistered and undocumented in Lebanon and therefore unsure of their status and not receiving any assistance. Leila (not her real name) fled from Homs as the bombs were falling and she saw her home being destroyed. She fled with her family, with nothing but the clothes she was standing in.

She lost two family members as she fled.

Her eyes welled up and she did not want to talk any more about it. That was then, life is so different now. She met a group of other Syrians who had fled to Lebanon and joined their camp. They have been moved several times since arriving in Lebanon.

ow she lives in a plastic covered tent with a concrete floor. She does not know what the future holds for herself, much less for her beautiful children. She wants to go home to Syria. She does not care who is in power. She just wants peace.

These are the people who have been left behind, and who the world is fast forgetting. They do not have the money to buy train tickets or plane tickets to a better life.

Refugees in Lebanon are not permitted to work. Rations, for those registered, have been cut from $30 per person per month to $13 per month. They cannot live on this. One man told me that they are slowly dying here, that it is better to die quickly by getting a boat to Europe than slowly dying where they are sitting. They may succeed, they may fail. At least they will know they have tried. There is a dignity in that.

These are the people we must remember – the poorest, and most vulnerable.

It is only when the war ends that Syrian refugees can finally think about going home. The dream of returning was echoed, not just by Leila, but by every family I met here in Lebanon this week.

Until peace is achieved and this dream can be realised, we must continue to offer them our assistance, support and friendship.

Whatever funding there is for us to respond to such population displacement and to meet basic humanitarian needs is only sticking plaster. The UN General Assembly, to be held in New York later this month, must address the Syria conflict itself.

Because, for these tragically displaced people, home will always be home.

And that’s a feeling that will resonate with every Irish person.