Lara Marlowe: An Irishwoman’s Diary on paintings that tell the story of war 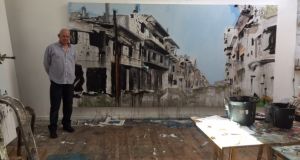 Irish painter Brian Maguire stands beside one of his paintings of devastated eastern Aleppo, after it was reconquered by Syrian government forces.

The Irish painter Brian Maguire’s giant canvases of eastern Aleppo are so real one feels one could walk into these streets of devastation.

Maguire’s Aleppo paintings are on exhibit at the Wilford X Foundation in Antwerp until the end of September. Seeing them, one can’t help remembering an earlier Maguire painting of the then abandoned Anglo Irish Bank construction site, at the height of the banking crisis.

“As an artist you look for images that can tell the whole story,” Maguire says. “The Anglo Irish building explained what banking had done to Ireland. The Aleppo paintings explain what a civil war does to a country.”

The ruins of a century of wars have also left deep impressions. The siege of Aleppo, which ended last December after a four-year battle, was called Syria’s Stalingrad. Satellite imagery showed more than 33,500 residential buildings partly or completely destroyed, the vast majority in the formerly rebel-held east of Syria’s largest city.

“The remains of buildings are the easiest way to explain warfare,” Maguire continues. “I remember a magnificent photograph from Gaza a few years ago. In the middle of the rubble, a sign said, “The US did this . . . All these things remained in my mind. It’s a kind of editing process.”

Maguire watched news images coming out of Aleppo. They reminded him of second World War photographs. “I got interested on the basis of the buildings,” he recalls. “That’s usually the starting point for buying the airline ticket, that I think there’s some work I can make here that explains what’s going on.”

His work, he says, “is as close as you can get to being a photo-journalist without actually being one”.

For paintings of the Mexican drug war, Maguire “embedded” himself in the newsroom of El Norte newspaper in Juarez for weeks. He pored over the archives, and Mexican journalists offered him photographs which he based his work on.

“There’s one thing I share with photo-journalists. I actually go there,” he says. “It doesn’t work unless you do that. There’s something about sharing a space with the people who are there that enables you to have some ownership of the images.”

Photographs of soldiers captured by jihadists in Aleppo sparked Maguire’s interest in painting the Syrian civil war. “In the first, their hands were tied with plastic. In the second, they were dead. Executing prisoners is a red line.”

But as a human being, he adds, “I couldn’t fail to be influenced by what I actually saw, and heard, and was told by the people I met. That was a different story than the one I read in the papers.”

During his 10 days in Syria, Maguire talked to university students in Aleppo and to women and communists who support the regime.

Amnesty International reported in February that the regime executed up to 13,000 people in one prison alone since 2011. The anti-government watchdog Violations Documentation Center reports that more than 1,100 Syrians have been killed in chemical weapons and gas attacks.

Maguire admits that the buildings he has painted were destroyed by Russian and Syrian warplanes.

“The death toll is estimated at hundreds of thousands,” he says. “Every death is laid at (President Bashar al-) Assad’s door, including his own soldiers. It’s nonsense, propaganda.” He likens reports of chemical weapons use to the Bush administration’s fabrication of evidence that Saddam Hussein had Weapons of Mass Destruction.

This vision of the conflict is hotly disputed by human rights groups. But it is now embraced by most of the powers who have a say in its outcome. Washington allied itself, de facto, with Putin’s Russia and the Islamic Republic of Iran when it recently announced it was withdrawing support from anti-Assad groups. The presidents of France and the US no longer say Assad must leave power.

1 Are we really facing the death of the office?
2 New Zealand marks 100 days without a case of coronavirus
3 10 upgrades that will add value to your home and 5 that probably won’t
4 Gardaí cannot prosecute people who breach midlands movement restrictions
5 Covid-19: One more death and 174 further cases confirmed in State
Real news has value SUBSCRIBE