Labour pains in Scotland: how the SNP is driving the agenda

‘The SNP will fight the coming election with some clear themes: Scots were robbed, Labour is dying and only they can deliver for Scotland’ 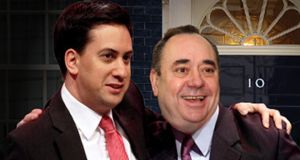 ‘The image is a rare example where the interests of the Conservatives and the SNP collide, since both want to emphasise Labour’s weaknesses.’ Above, detail from a new Conservative Party political poster showing Labour leader Ed Miliband, and Scotland’s former First Minister Alex Salmond of the SNP. Photograph: Conservative Party/PA

The Conservatives recently produced a Twitter image photoshopped to show Ed Miliband on the steps of No. 10 Downing Street, arm-in-arm with Alex Salmond of the Scottish National Party.

The image is a rare example where the interests of the Conservatives and the SNP collide, since both want to emphasise Labour’s weaknesses.

For the Conservatives, the image plays well with voters in England who recoil at the prospect of a party from the UK’s regions — be it Scotland, Northern Ireland or any other region – dominating Westminster.

For the SNP, the image drives home the message to Scottish voters to vote SNP, not Labour when they go to cast their ballot in the British general election in May.

Since devolution to Edinburgh in 1999, Scots have made distinctions in their voting: increasingly swinging to the SNP in Holyrood elections, but, largely, sticking with Labour for the Commons.

Currently, Labour holds 40 of Scotland’s Westminster seats: the Liberal Democrats hold 11; the SNP has six, the Conservatives just one, plus a single independent in ex-Labour MP, Eric Joyce.

The SNP has ruled out supporting the Conservatives in any guise. In reality, it has no more interest in propping up a Miliband administration.

The ambition is not to be in government in London, with all of the responsibility that that entails. The ambition is to destroy Scottish Labour and provoke the circumstances that will lead as quickly as possible to a second referendum. For many in the SNP that means a Conservative victory, not a Labour one.

But even the possibility that Alex Salmond could be deputy prime minister is manna from heaven for the nationalists as they seek to undermine Labour in Scotland.

First, it provokes the “little England” camp, who can be depended upon for a flurry of anti-Scottish remarks that can be then used to feed Scotland’s often-justified, but never-ending sense of grievance.

Already, there has been one example. Murphy boasted that Labour’s mansion tax – one that would hit tens of thousands of houses in the South-East of England, but few in Scotland – would pay for an extra 1,000 nurses in the National Health Service in Scotland.

The declaration is a statement of the obvious: taxes are centrally-raised and then dispersed. However, the baldness of Murphy’s boast infuriated Labour colleagues down south.

Much of the work of undermining Labour in Scotland has already been done, and done by Labour, not by the SNP. Its organisation calcified during decades when voters’ support could be weighed, not counted.

A succession of polls all predict the same outcome for May: massive gains for the SNP at the hands of Labour, with some even predicting Labour’s wipe-out.

Labour’s lowest-ever share of the vote in Scotland came in 1983 – the Michael Foot general election. This time, the result appears certain to be worse. The question is by how much.

However, Labour can suffer major losses in many constituencies in Scotland and still stagger home, even if victory would look far from decorous.

Since his election, Murphy has put some spring back into the step of Labour staffers around the Holyrood parliament – even though he is not yet an MSP.

However, it is as yet far from clear whether Murphy – a Blairite in a land where Blair never reached the heights of the popularity he achieved elsewhere — can do the same for the organisation throughout Scotland.

His relationship with trades’ unions is fractious. None of Scotland’s three major unions – Unison, Unite and the GMB, his own union — backed him in the race for the party leadership, for example.

Meanwhile, the SNP’s march continues, despite losing the independence referendum last September by more than 10 points. Membership now stands at over 100,000.

Privately, some in the SNP believe they will win more than 20 seats in May, perhaps substantially more – a great result, but not the wipe-out landscape being predicted by other quarters.

However, it is difficult to see an outcome whereby Labour could be destroyed, or nearly destroyed in Scotland where it would then be in a position to form a Commons majority with the votes of the SNP.

And the votes would be dearly bought. So dearly, in fact, that the prospect that Labour MPs would accept such a deal is one that could not be taken for granted, or even regarded as a probability, since it would be seen as the signing of a death sentence on Labour’s ambitions to be a British-wide party.

Meanwhile, the devolution proposals in the Smith Commission are the gifts that keep on giving – particularly following the draft legislation published in Westminster last week.

Extra powers over tax and welfare are included; authority, too, over the revenues from the Crown Estate. Scotland was left unimpressed.

Final decisions over changes to welfare rules would have to be agreed with Westminster, says the legislation. A veto, declared Scottish First Minister Nicola Sturgeon indignantly.

The sense of grievance was, perhaps, over-played; but even dispassionate observers see holes in the devolution offer that could make some elements of it unworkable in practice.

Much has changed in Scotland since September 18th. For now, the SNP readies to fight the coming election with some clear themes: Scots were robbed; Labour is dying and only they can deliver for Scotland. Few parties will ever have enjoyed such favourable winds.

1 Dr Tony Holohan expected to return to his post next week
2 NPHET recommends stricter household visitor limits across the State
3 Don’t use Google, don’t use work email, don’t hit ‘accept all’: how to fight for your privacy
4 How one couple’s weekend away resulted in 30 Covid-19 cases
5 Return to normal life, Russians were told – except for Vladimir Putin
Real news has value SUBSCRIBE