Irish Water is to Murphy what Euroscepticsm was to Johnson. It is the single issue that keeps on giving and that he never wants to see resolved 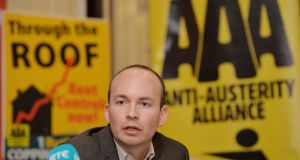 Anti-Austerity Alliance TD Paul Murphy. The car is still speeding along and he is in no danger of catching it. Photograph: Alan Betson / The Irish Times

Boris Johnson and Paul Murphy have more in common than you might think. Both went to posh schools and good universities and their lives thereafter seem to have gone in vaguely similar directions.

Murphy dabbled in student union politics, became a full-time “activist” with the Socialist Party and ultimately a TD.

Johnson went into journalism and then into politics, first as an MP, then as mayor of London and then as an MP once again. The real similarity, however, is in how they play the game of politics.

One of the more stinging criticisms of Johnson after his post-Brexit referendum flame-out came from Thomas Friedman of the New York Times. He likened Johnson and his fellow travellers to a dog chasing a car they will never catch.

They had advanced their careers by supporting something populist in the knowledge that they would never have to deal with the consequences, he wrote.

The argument is that Johnson no more wanted a Yes vote in the Brexit referendum than he wanted a hole in the head. What he expected was a narrow defeat that would allow him continue to beat the Eurosceptic drum that had served him so well.

It makes sense - no politician in their right mind would really want the job of sorting out the entirely predictable but utterly intractable mess that Britain now finds itself in.

The accusation of being an irresponsible fraud who put his own career ahead of the national interest came up time and again in the various demolitions of Johnson post his decision not to run for the position of prime minister.

When you look at the dumping of Joe O’Toole from the role of chairman of the expert commission on water charges this week, you can’t escape the conclusion that Irish Water is to Murphy what Euroscepticism was to Johnson. It is the single issue that keeps on giving and that he never wants to see resolved.

It may well have been Fianna Fáil that administered the coup de grâce, but the writing was on the wall for O’Toole once Murphy and the Anti-Austerity Alliance got the bit between their teeth on the issue of his impartiality.

Micheál Martin’s determination not to be outflanked on the water issue by Murphy meant it was inevitable O’Toole would have to go.

It’s a pity. O’Toole’s only crime seems to have been to speak the truth when nobody else would.

What appears to have done for him in Murphy’s eyes – and thus Fianna Fáil’s – was a radio interview in which he described the commission as follows: “A political exercise to resolve a problem that has emerged from the democratic process. People voted a certain way. Leinster house is not prepared to grasp that particular nettle, so we have to find a solution that will have enough sugar on it to make the medicine go down easily.”

It is hard to argue with O’Toole’s refreshingly frank description of the job. In fact, such was the clarity of his understanding of what was expected of him, there was a decent chance he might have got the job done.

It is exactly the sort of pragmatic approach you would expect from a former senior trade union official and one suspects very similar to the one that his successor, former head of the Labour Court Kevin Duffy, will adopt. Duffy might however eschew radio interviews.

The proof will come in five months’ time when the commission reports back to the Dáil, which will vote on its recommendations. Expect a well-sugared pill.

The upshot of all these theatrics is that Murphy has scored a victory, and the process of resolving the problem of how we are going to pay for water services has been delayed.

It is clever politics by Murphy.The car is still speeding along and he is in no danger of catching it.

You cannot say the same for Fianna Fáil. If this week’s opinion poll in The Irish Times is anything to go by, it may be much closer to catching the car than it thought. And then what happens?

It could find itself within the Government, trying to balance the books and with the problem of how to pay for Irish Water unresolved. Sabotaging the process it helped design will seem very short-sighted. Particularly if the economy is not delivering the better-than-expected levels of corporation tax revenue we are experiencing.

Fianna Fáil knows water services have to be paid for. It also knows paying for them out of general taxation rather than from a ring-fenced income stream is a bad idea.

It knows the European Commission is serious when it says that, having introduced water charges, the Government cannot simply abolish them.

Europe is as likely to agree to such a paradox as it is to let the UK leave the EU and enjoy all the benefits of membership.