John Horgan: An important landmark in the freedom of the press

‘There may well be deficiencies in political or parliamentary accountability, but remedying these has to remain the responsibility of parliament itself’ 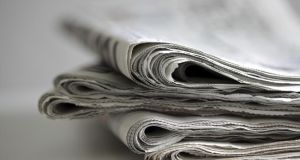 ‘The core requirement here is that any system of accountability should enhance rather than diminish public trust in the media’s ability to do its job.’

The High Court clarification yesterday, although it might have been anticipated by lawyers, is an important landmark in the freedom of the press, which is none the less valuable because it has come as the result of complex legal proceedings whose implications were initially unclear and appeared – from the viewpoint of the press at any rate – to be unwelcome.

In the context of this court clarification (that a speech made by Deputy Catherine Murphy in the Dáil could be reported by the media) it can now clearly be seen that the freedom of the press is a country cousin of the freedom of parliamentarians to say whatever they like without fear or favour. It is not imbued with the same power, but neither can it escape the demands of the responsibility that always accompanies power.

The default position cannot avoid the possibility that mistakes can and will be made in both areas, but this should not obscure the fact that press and parliament alike, with all their imperfections, on balance serve the public interest more than they impair it, and that there is a clear public interest in the freedom of the press itself.

All of this is conditional on two factors. One is that no freedom – not even that of parliament in a country like ours with a written constitution – is absolute.

The degree to which any freedom can be circumscribed or made accountable is a matter for society itself and, within that society, for those who are responsible for political or media accountability.

Journalists are rightly suspicious of the attempts of those with political or economic power to bend the media to their will; but the power of the market is sometimes as inimical to press freedom, and more insidious, as heavy-handed attempts at regulation or control.

The core requirement here is that any system of accountability should enhance rather than diminish public trust in the media’s ability to do its job.

The second factor is the inescapable fact that the truth sometimes hurts. The press (including of course the electronic and online media) should always exercise the appropriate level of sensitivity that is enjoined by the Press Council’s Code of Practice, which in essence means avoiding the inflicting of gratuitous pain or distress unaccompanied by any public interest justification. But a clear understanding of where the public interest lies, and how best to reflect and inform that public interest, will betimes have to trump personal feelings and on occasion even privacy.

The public’s understanding of all of this is often partial and contradictory. A 2012 survey on the press carried out by the Carnegie Trust in the UK showed disappointingly low levels of trust in the media of that country.

The public, they also found, seems to support publication for stories where there is greater evidence of harm to others, or to the public at large, rather than signs of wrongdoing per se. Stories calling someone’s professional competence into question also enjoyed higher support for publication than those revealing deceit, for example. This may seem like a pragmatic rather than a moral or ethical judgment; but it could also be argued that it has a high ethical content.

In all of this there is the issue of competing rights, and who or what should resolve conflicts of rights. The European Convention on Human Rights, for example, enshrines everyone’s rights to respect for private and family life, home and correspondence (Article 8). But Article 10 also enshrines the right of everyone (ie including the press) to “hold and receive opinions and to receive and impart information and ideas without interference by public authority”.

In the final analysis, the resolution of conflicts between these rights is generally, and quite properly, a matter for the courts. But in Ireland, and indeed in other countries also, the primary context in which those rights are exercised, and conflicts between them resolved, is the constitutional one.

And on the freedom of the press, and of parliament, our Constitution – and now our courts – are gratifyingly clear.

1 Life in Level 3: What will happen under new restrictions in Dublin?
2 Coronavirus: Dublin hospitals under ‘significant pressure’ as county set for Level 3
3 Coronavirus: Indoor dining, weddings, funerals, travel to be hit as Dublin set for Level 3
4 Stephen Donnelly dodges the questions as Matt Cooper mercilessly pursues the answers
5 Cluster among golfing group in Midlands a 'significant Covid-19 incident'
Real news has value SUBSCRIBE