John Fingleton: Ireland is the passenger in the Brexit car crash 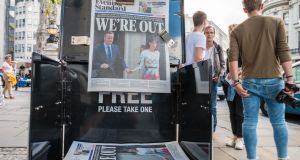 In April and May I gave talks in Ireland about the implications of Brexit on Ireland. I did not expect the UK to vote for Brexit, although I saw it as a clear possibility. I likened Ireland to the passenger in a car who has little control over the steering wheel, but who may be more harmed by a crash than the driver. So what now for Ireland?

There are at least four mechanisms by which Ireland will be affected by Brexit.

First, there is the direct economic effect. The UK is an important trading partner and Ireland is a net exporter to the UK. Irish exports could be harmed by a weaker UK economy and the loss of competitiveness from sterling falling. Political and policy uncertainty may harm business investment. The size of these effects is currently unclear. Some sectors would be more affected than others.

On the other hand, Ireland, and Dublin in particular, may benefit from businesses moving from London and locating in Ireland to access the EU market. This effect would likely be positive, but it would increase congestion and house prices in Dublin, leading to potential social inclusion issues. Careful policy responses may be required to avoid Dublin becoming as divorced from the rest of Ireland as London is from England.

Second, there is the indirect effect on Ireland via the impact on the EU as a whole. We have already seen the euro and European shares fall. The good scenario is that the EU responds well, and that there is little reduction in demand for Irish exports. A less good scenario is that EU demand falls, and political uncertainty across the EU holds back investment. Even worse would be the destabilisation of the EU due to the rise of nationalism, for example. It is too early to know which of these is likely, but all have negative implications for Ireland.

There will be a separate indirect EU effect on Ireland via the EU policy response. The UK and Ireland have been close allies in much of EU policymaking and have jointly promoted liberal economic policy with considerable success. Both have strongly resisted pressure for tax harmonisation. Ireland may lose policy influence from Brexit.

For example, post-Brexit it seems likely that Ireland’s favourable corporate tax treatment will come under pressure. And to the extent that EU policy becomes less pro-market, small open economies like Ireland may be disproportionately affected.

There is a serious question as to whether the minority Government in Ireland can withstand the buffeting of vested interests, especially if there are trade-offs between remaining integrated with both EU and UK markets. A lot depends on whether the fallout from the Brexit vote has a sobering impact on the Irish political system or further exposes the volatility that has existed since the general election in February. Without coherent government to lead strong policy responses, the impact on Ireland will be worse.

Fourth, there is the impact on Northern Ireland. It is hard to see how Brexit can be beneficial for Northern Ireland as it depends on substantial funding from Westminster and foreign direct investment for access to EU markets. It relies critically on trade with the Republic, meaning that both economies will suffer. Ultimately decisions on the Border will be for Brussels and London to agree, and Dublin may have to fight to influence this.

The weak state of current political leadership will make it very challenging to get clear, high-quality policy decisions from London and Brussels in a timely manner. This means the Irish economy and society remain very exposed, and that Irish politicians may have little control over the outcomes.

Ireland comes to this challenge with a decent starting position. The economy is recovering and it has rebuilt its reputation for economic competence in the EU. Irish politicians enjoy good relationships and goodwill across EU capitals.

Brexit has the potential to be a new golden era for Irish diplomacy and influence, or one of its biggest failures.

If Irish politicians can provide strong and coherent political leadership, backed up with a strong Civil Service and foreign affairs machine, they could prevent substantial harm to the Irish economy and society, and the EU project on which Ireland is so dependent.

John Fingleton was chief executive of the UK Office of Fair Trading from 2005 to 2012, having previously run the Irish Competition Authority