John Bruton: How Ireland can keep the lid on spending and budget like a family 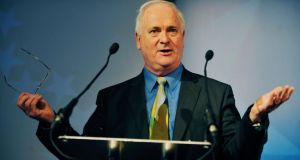 John Bruton: ‘The Department of Health, has been responsible for 70 per cent of the breaches in the ceilings (which altogether totalled over €600 million)’. Photograph: Aidan Crawley

We will only have an intelligent debate about spending and taxation in the forthcoming Irish general election if we know that spending and revenue estimates for all the following five years and the policy choices that underlie them are accurate and fully explained.

The spring economic statement by the Government was criticised, mainly because it contained “nothing new”.

This type of criticism shows how little had been learned from the recent economic crisis. A constant search for novelty in annual budgets is what got Ireland got into difficulty in the first place. New “initiatives” in budgets from 2000 to 2007 eviscerated the tax base and led to unsustainable spending commitments.

In that deluded era, if the annual budget did not contain a new and costly announcement, the Minister would have been accused of lacking “vision”!

Now the same chorus is beginning to be heard again. Memories are indeed short.

In the debate on the spring statement, Minister for Public Expenditure and Reform Brendan Howlin said the Government was “now planning expenditures on a multiyear basis”, and that departments were operating under “multi-annual expenditure ceilings”. Although these ceilings are legally mandated, are they firm enough or can they be too easily raised without serious questions being asked?

Certainly, in the 2000 to 2006 period, the second- and third-year ceilings on spending were fictitious. It turned out that spending in the second year exceeded the “ceiling” by 6 per cent, and in the third year by 12 per cent. Low figures were put on paper, but the decisions needed to stay within the figures were not taken. This was politically understandable, but financially disastrous, as we now know.

Since 2011, three-year spending ceilings have been much firmer in most departments, but not in all. In fact, one department, Health, has been responsible for 70 per cent of the breaches in the ceilings (which altogether totalled more than €600 million). This should not be. Health spending should be predictable.

As the population ages, pressures on health budgets will increase further.

Brendan Howlin has pointed out the ageing of Irish society will add €200 million per year to health costs and high birth rates will necessitate the appointment of 3,500 extra teachers by 2021.

Next year, the natural growth in demand for existing public services will on its own increase spending by €300 million, without any change in policy.

Furthermore, the Government is obliged to reduce public expenditure as a percentage of GDP up to 2020, according to its stability programme published in April.

Under it, GDP is set to grow by 3 per cent, but public spending by only 1 per cent. The difference is needed to allow for reduction of debt, as required by the fiscal compact the Irish people approved in a referendum.

In essence, demographics are pushing spending up, while tough debt reduction requirements are pushing it down.

Of course, taxation can be increased too, but not by much without risking a flight of capital and talent to elsewhere in the mobile, globalised world in which we live.

So expenditure ceilings, for the forthcoming five years for each department, including Health, will have to be set with rigorous honesty and courage, and then kept to. There can be no optimistic underestimates, as there sometimes were in the past.

This natural increase in spending, without policy change, needs to be spelled out for each department, and separated completely from any increase (or reduction) that is due to a policy change.

The budget system should incentivise local managements, who know their services best, to make the necessary savings and reallocations in time. They know how to do it in the least painful fashion. That job cannot be done as easily by Merrion Street.

This would ensure that the costing of future spending and tax commitments would be “evidence-based”.

A family has to plan its finances five years ahead, and take corrective action if things are getting off track.

Government should do the same.

John Bruton is a former taoiseach. As minister for finance in 1981, he published A Better Way to Plan the Nation’s Finances, which advocated multi-annual budgeting by the State

1 Green Party’s Catherine Martin understood to have confirmed she is standing against Eamon Ryan
2 Nine more deaths from Covid-19 recorded in Ireland along with 24 new cases
3 Hundreds protest outside US embassy in Dublin over George Floyd death
4 Donald Trump’s political success is based on racism
5 Why you still can’t have a European holiday this summer. Or can you?
Real news has value SUBSCRIBE