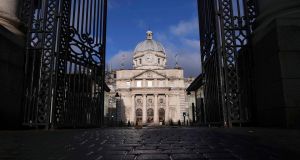 The broad Kerry tone or sharp inner city accent of newly-elected non-party TDs on the airwaves prompts the big questions of polite Dublin society, what did we do to deserve this political mish-mash of lefties and Independents? How did it happen, and what’s next?

In truth, it is not the “how” as much as the “why”, and in that regard we can begin by dismissing the facile explanation of a new and revolutionary left-right alignment in Irish politics.

If the electoral outcome is that there be a more distinctive left-right spectrum in the Dáil membership then that is more happenstance or serendipity rather than ideological.

This idea that voters go into the booth to vote left or right is a myth. Read the posters, listen to the slogans.

Voting choices are based on needs and likes, not ideology.

In the brown corner we have the urban AAAs and in the green corner the rural Independents.

Each grouping has attracted disdainful and dismissive comment from the commentariat, with muttered references to “parish-pump politics” and “ the lunatic left”.

However, these seemingly disparate groups have much in common.

Our cities have seen a huge rise in homelessness, crime and social problems, as well as a chronic shortage of homes and a reduction in living standards.

Some of our inner-city areas have become sub-strata of society where people struggle to exist.

No wonder then that they flock to vote for those who articulate their views and align themselves with candidates who voice their concerns.

That they are hard-left might be important to the ideologues who stood for election, but it is no more than a coincidence to the voters.

Away from the cities, denuded rural villages and towns have witnessed the dismantling of their communities through a reduction in schools, post offices, Garda stations etc, and they see it continuing through issues such as inadequate transport and broadband provision.

Roads, waste collection and water services are aspects of rural life which were once the responsibility of local authorities but have now become centralised. Administration has become urban centric. Rural Ireland feels abandoned.

This all began with the evisceration of county councils through the abolition of rates in 1977, and has continued since.

One of the final blows was the elimination of town councils and the reduction of county councils recently.

All of these measures might have made financial sense, but they left rural communities powerless and frustrated as councillors on local authorities have had their discretion reduced and reduced.

But people are not stupid, and realised that what was once a local matter is now a national matter.

What was once debated and decided in the county council is now determined in the Dáil.

Consequently, we have a whole swathe of rural Independents along the Atlantic coast from Donegal to west Cork, and through the centre of the country from Roscommon to Tipperary.

Whether they are left or right is not an issue to those who elected them. Trying to relate electoral outcomes to left and right alignment would be met with bemusement among voters in inner-city Dublin or rural Kerry.

It would be a mistake to be distracted by the hats, caps or accents of the new TDs.

In navigating through the electoral minefield unaided they have proven themselves to be clever, intelligent and strategic.

If they are required to adopt new roles and co-operate with a new government to represent their constituents they will do so. It would be perilous for the big parties to underestimate them.

And in that regard let us bear in mind that the capacity of politicians to compromise is boundless.

They have done it all before. After the 1948 general election the formation of a government looked impossible.

1 Lithuanian man given until midnight on Saturday to leave Ireland
2 Steve Coogan: ‘Come Out, Ye Black and Tans is two fingers to the British’
3 Anti-Irish bigotry in Britain has not gone away
4 Ryanair’s Michael O’Leary under fire for comments on Muslim men
5 Coronavirus in Europe: Two dead in Italy as fears grow that attempts to contain illness are failing
Real news has value SUBSCRIBE