International Refugee Day: As we mourn the death of Jo Cox, sadly, the war in Syria continues to worsen 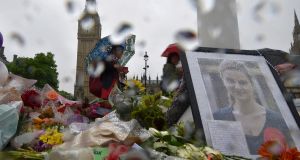 The death of British Labour Party MP Jo Cox will impact heavily on our society. Perhaps more than many people realise.

Her family, friends and loved ones will feel her loss the most. That is natural. But wider society will feel it too. She was a champion of autism, maternal healthcare and, just last Christmas, spent time volunteering with the elderly.

Internationally, it is the Syrian community who will undoubtedly suffer most from her death, although many Syrians may not realise it.

One of the central reasons why the five-year long conflict has been allowed to continue for so long is that not enough people of influence, not enough people like Jo Cox, were prepared to stand up and fight for the Syrian people.

From her days as an aid worker to her final hours, she routinely raised the issue of Syria, and particularly the UK and Europe’s wretched response to the crisis, the need for increased diplomacy, the lack of humanitarian access, and the creation of safe havens to protect civilians.

She used her maiden speech to Parliament in June 2015, to declare her position on immigration and multiculturalism, stressing that while diversity should be celebrated, what surprised her most as she travelled around her own constituency of Batley and Spen was that people were “far more united and have far more in common with each other than things that divide us”.

She nailed her colours to the mast there and then.

She went on to stage Commons debates on the plight of the refugees. Most recently, on May 3rd this year, she called out the British government for its “shameful refusal” to give 3,000 unaccompanied refugee children sanctuary in the UK.

But she didn’t just talk; she acted. Shortly after her arrival in the House of Commons, she boldly knocked on the door of former International Development Secretary, Andrew Mitchell. Apart from a hiatus of four years, Mitchell has been a Conservative MP since 1987. She told him she wanted to set up a new all-party parliamentary group that would offer an inclusive forum for parliamentarians to further develop their understanding of the Syria crisis, and of UK policy options.

In her view, it was time to get Syria off the “too difficult to deal with” pile. The Friends of Syria All-Party Parliamentary Group, of which she subsequently became co-chair, focused on Syria and the Syrian people and consistently lobbied the British government to put an end to the brutal actions of the Assad regime.

Not long after her meeting with Mitchell, the duo put forward what could be described as their manifesto in the shape of a co-authored opinion article in the Observer. In the piece, they wrote about the need for the UK to push for “a more ambitious collective response” with regard to the Syrian refugee crisis, including providing safe and legal routes for people to claim asylum. The line about Syria being “our generation’s test, our responsibility” was designed to make politicians across the UK shift uncomfortably in their seats.

The same article argued for the creation of “safe havens” inside Syria, which they hoped would save lives and help to slow down the refugee exodus. This question of enforcing no-bombing zones, which Jo Cox raised repeatedly during her time as an MP, most recently last month, has been voiced by others in the past five years, including GOAL.

Many of us can understand her frustration regarding Britain’s decision to take a disproportionately small number of refugees, particularly considering that it contributed to the crisis in the first instance by its invasion of Iraq, its failure to pull up Assad on his chemical weapon usage in 2013, and the intervention in Libya.

This narrow-minded policy, and the arguments currently being put forth by the Leave campaign as reasons why Britain would be better off outside the EU, are, many would argue, decidedly un-British. When most fair-minded people think of Britain, they think of an ethic of fair play, of the rule of law, of an ethic of adherence to international conventions and adherence to concepts like collective responsibility, burden-sharing, solidarity and neighbourliness.

Those ethics, when judged against the UK’s response to the refugee crisis, have failed the people of Britain.

And today, as we mourn the death of Jo Cox, sadly, the war in Syria continues to worsen. Recent research carried out by GOAL has demonstrated that there has been an increase in hostilities in GOAL’s areas of operation in Northern Syria since the US-Russian brokered cessation of hostilities came into effect earlier this year. Our team has witnessed an increase in violence and conflict in a 100-day period since February 27th, compared to the 100 days previous to the announcement.

Still hospitals continue to be targeted, along with schools, markets, bakeries and other places where civilians gather in numbers. A week ago, an airstrike on a vegetable market in Idleb City killed more than 30 people, some of them children.

On June 10th, food aid finally reached Darayya, a suburb of Damascus, for the first time in four years. Early the following morning, only hours after the convoy left, barrel bombs were dropped there.

Meanwhile, it is no surprise to anyone that the EU-Turkey deal, now almost three months old, is failing miserably to tackle the refugee issue. As I write, approximately 50,000 migrants remain in limbo on the Greek mainland, while a further 8,000, including unaccompanied minors, are stranded in camps on the surrounding islands. Fewer than 500 people have been deported back to Turkey.

Jo Cox was one of a small number of brave and outspoken people who advocated on behalf of all these people; those who are in daily fear of their lives inside Syria; those left directionless on the fringes of society in Greece or other European countries; and those seeking refuge in other parts of Europe, striving to build a new life for their families, wherever that may be.

She was a vital voice at a high level. She wasn’t afraid to ask the tough questions. She was principled, determined and passionate.

She was a true humanitarian.

1 Irish designer of Oxford vaccine: ‘I’ve never worked so hard in my life’
2 BOI customers to be charged twice with bank fees on New Year’s Eve
3 Operator rejects claims by Dr Tony Holohan that car parks are full
4 Somebody needs to explain sovereignty to Johnson before it is too late
5 Orangeman was asked if he wanted Irish flag removed from Dublin Castle
Real news has value SUBSCRIBE