Ivana Bacik: Repeal the Eighth Amendment for the sake of our daughters 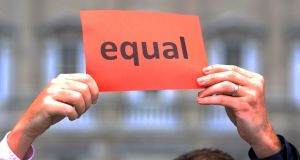 “We know from the divorce and marriage equality campaigns that, in order to be passed, the effect of a referendum must be clearly spelt out in advance – people need to know what they are voting for.” Photograph: Gareth Chaney Collins

We need to repeal the Eighth Amendment. This amendment, passed in 1983, has cast a blight over an entire generation – our generation, too young to have voted 32 years ago, but whose daughters are now growing up under its chill. Its effect has been utterly negative and in some cases, devastating. It has not prevented one crisis pregnancy. But it has compounded the crisis of pregnancy, particularly for those women for whom the journey to seek abortion abroad is particularly difficult: young women, women in poverty, asylum seekers.

It has symbolically portrayed women as vessels, equating our lives to those of the unborn. And, above all, it has endangered women’s lives by having a chilling effect on the practice of obstetrics in Ireland, making doctors afraid to intervene to save a pregnant woman’s life until she is close to death.

Calls for repeal are becoming increasingly strong, particularly since the tragic death of Savita Halappanavar in 2012, and the prolonging of life support for a pregnant young woman, against her family’s wishes, in a hospital last December. Because of the amendment, the long- awaited legislation passed in 2013 to implement the X case and allow for abortion on grounds of physical risk to life, or risk of suicide, could provide for abortion only where a woman’s life was at risk – we could not legislate for any other ground. Because of the Eighth Amendment we could not legislate to allow abortion in cases of rape, nor where a pregnancy poses a serious risk to a woman’s health; nor even in cases where a baby is incapable of being born alive.

Yet we know that thousands of Irish women travel to England to terminate their pregnancies every year; 3,735 did so last year alone. Since 1983, more than 160,000 women have made this journey.

We have seen more and more groups joining the Coalition to Repeal the Eighth Amendment. And we have seen the powerful video call for repeal, Chains, made last month for Amnesty by Graham and Helen Linehan, based on their experience of fatal foetal abnormality.

This makes repeal of the amendment a Labour manifesto commitment: repeal is a priority for the party in negotiating any programme for government. Not only that, but today we are publishing the scheme of the Bill that Labour would introduce if the referendum for repeal was passed. This legislation, the Repeal the Eighth Amendment Bill, represents a significant step forward: no other major political party has nailed its colours to the mast on the issue of abortion in this way. But we believe it is important that other parties do so – for two key reasons.

First, we know from the divorce and marriage equality campaigns that, for a referendum to be passed, its effects must be clearly spelled out in advance – people need to know what they are voting for. We are clearly calling for repeal of the entire amendment: we believe the Constitution is no place to regulate abortion. Instead, we call for abortion to be regulated through compassionate and sensitive legislation, in line with that in place in other European countries.

The framework legislation we have prepared represents this model. It will allow abortion on four medically certified grounds: risk to life; risk to health; rape; and fatal foetal abnormality. The test for assessing risk to health will be that of “real and substantial risk”, a test with which doctors are familiar from existing law. A stricter test will apply for risk to health where abortion is sought beyond the first trimester.

Our framework will repeal existing laws that criminalise women and their doctors; and it will provide protection for those offering and accessing legal abortion services. This is sensible and moderate legislation, relatively conservative by European standards. Indeed, many of us might prefer to see a more radical abortion law in place, but we recognise that the Bill we have prepared more closely reflects the current views of Irish people on abortion, as measured in successive opinion polls.

The second reason is because we want people to know that we are serious about achieving repeal. Labour is the party of social change: we have long taken liberal stances on social issues such as contraception and divorce. In line with this tradition it was Labour that pushed for a referendum on divorce in 1995; gender quota legislation was Labour policy; and it was Labour that ensured marriage equality was included in the programme for this Government. In all these cases we achieved change. But change cannot be achieved without a clear and practical strategy.

Our strategy is to declare our position by publishing this Bill, so voters know where we stand on the issue of abortion. We challenge other political parties to do the same now. There is a groundswell of public support for a referendum on the Eighth Amendment. Let’s achieve repeal and end the chill – for the sake of our daughters and their generation.

1 Mary Lou has to call for the smelling salts as SF councillor deals a knock-out blow
2 Fine Gael deletes spoof election video after negative response
3 Chris Hadfield on the climate crisis: ‘The world has seen much, much worse’
4 ‘He was some man’: Shane’s journey from care child to fearless activist
5 St Michael’s conveyor belt showing no signs of slowing down
Real news has value SUBSCRIBE